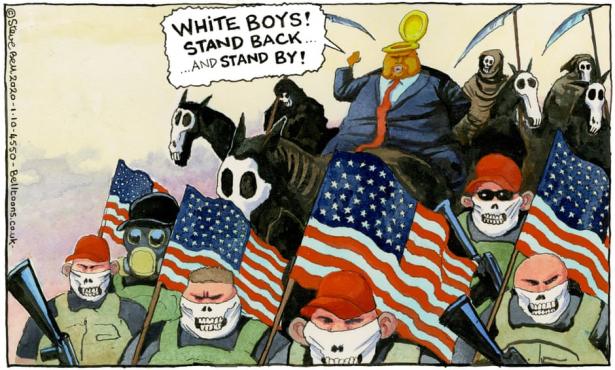 The Devilish Details of Vaccine Distribution

Early access to a novel vaccine will create both challenges and opportunities across long-term care settings. Three key areas that policymakers must pay attention to in long-term care are financing, personnel and mistrust.

Since most high schools and colleges don’t have topics like abolition or anti-capitalism built into their curriculum, many students have to turn to other sources to learn this information. On Twitter, accounts like the Zinn Education Project and the Claudia Jones School for Political Education have garnered thousands of followers.

Trump’s efforts to cling to power are unprecedented in American history. While political parties have fought over the results of presidential elections before, no incumbent president has ever made such expansive and individualized pleas to the officials who oversee certification of the election results.

By Joseph Choi
The Hill

An article in the Kansas City Star took a deep look into the paper’s coverage of race and the Black community since its founding in 1880.

The Right and Conspiracy

The line between mainstream and fringe is vanishing, with conspiracy-minded Republicans now marching alongside armed extremists at rallies across the country.

By Celine Castronuovo
The Hill

Intimidation and threats to election officials and lawmakers are feeding fears about violence amid calls by President Trump’s supporters to stop the certification of election results.

There have been at least 1,100 strikes since March 1. Among those have been high-profile strikes launched by Instacart, Whole Foods and Amazon workers, as well as by frontline health care workers.

From the American Revolution through the Global War on Terror, author Chris Lombardi tells the inspiring stories of people who refused to kill.

Louis Armstrong and the Historical Record

By Ed Prideaux
The Guardian

Casual listeners think of him as a gentle giant of jazz, but critics and African Americans often saw him as a sell out or ‘Uncle Tom’. A new book aims to show how radical ‘Pops’ really was.