Mutual aid is not only about addressing the crisis at hand but also about undoing the injustices of colonialism and imperialism. 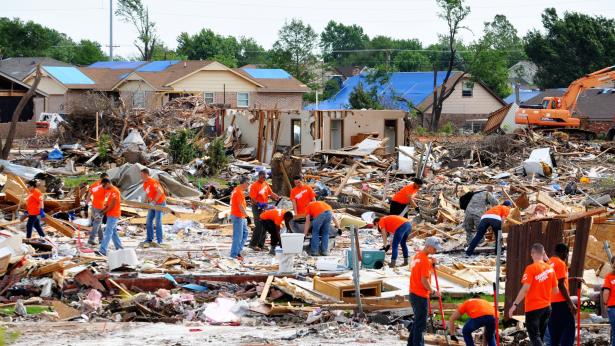 After COVID-19 struck in spring 2020, the absence of a concerted federal response prompted people across the country to begin self-organizing everything from food distribution to sewing squads to shelter. That work continues today, drawing on a long tradition.

In the wake of disasters, most people respond with altruism, creativity, generosity, and a cooperative spirit.

“Mutual aid,” a concept coined by the Russian naturalist and anarchist Peter Kropotkin in his 1902 Mutual Aid: A Factor of Evolution, refers to the principles of cooperation, and of people joining together to help each other. It ran counter to the then-hegemonic Darwinian theories emphasizing competition and survival of the fittest. Kropotkin did not deny the role of competition, but he argued that the cooperative spirit has gone under-examined.

Kropotkin traced the role of mutual aid in various communities over stretches of history and geography, including among Indigenous communities, so-called free cities in Europe, guilds, labor unions and poor people, and he flagged one key factor that undermined these relationships: privatization.

Reciprocity forms the bedrock of Indigenous worldviews. Robin Wall Kimmerer, in Braiding Sweetgrass: Indigenous Wisdom, Scientific Knowledge and the Teachings of Plants, writes of the “web of reciprocity, of giving and taking. . . . Through unity, survival. All flourishing is mutual.”

Indigenous cosmologies in Central America are similarly informed. In mid-November, Hurricane Iota struck regions of eastern Nicaragua and Honduras that Hurricane Eta had just hit two weeks prior. In Eric Holthaus’s newsletter The Phoenix, he writes, “Since Hurricane Eta, Indigenous people along the Nicaragua coast have resorted to a traditional form of mutual aid called ‘pana pana,’ where neighbors give what they have to those in greater need.”

Mutual aid manifests itself most intensely during crises. “This is when the structures of the state and of capitalist markets not only fail to address the emergency situation but they often show their complicity in making it worse,” writes Massimo de Angelis, in the introduction to Pandemic Solidarity: Mutual Aid during the COVID-19 Crisis. He says it amounts to a collective cry from society that “I want to evolve but my evolution depends on you.”

In her 2009 book A Paradise Built in Hell: The Extraordinary Communities that Arise in Disaster, Rebecca Solnit examines how people rise up to help one another through crises, such as the 1906 San Francisco earthquake, 9/11, and hurricane Katrina. She found that in the wake of disasters, most people respond with altruism, creativity, generosity, and a cooperative spirit.

Mutual aid is not only about addressing the crisis at hand but also about undoing the injustices of colonialism and imperialism and, using an intersectional framework, working to ensure racial, gender, economic, health, and environmental justice.

Just this week, E&E reported that “the Federal Emergency Management Agency [FEMA] is proposing to slash disaster aid to states by making it substantially harder for them to qualify for assistance after extreme weather events like floods, wildfires and storms.”

After Hurricane Katrina hit in 2005, while federal, state, and local agencies left people stranded without shelter or food, groups including the Common Ground Collective worked to provide housing, clothing, health care, and legal services to those in need. The organization was cofounded by former Black Panther Malik Rahim, drawing in part on the Black Panthers ten-point program, which offered free breakfast programs and free health care and legal clinics, and advocated principles of mutual aid.

Amid the pandemic, communities have sprung into action. With the economic fallout and lack of federal “survival checks” (as U.S. Representative-Elect Cori Bush, Democrat of Missouri, refers to them instead of “stimulus checks”), people are not only calling for an extension to the federal eviction moratorium, which expires at the end of 2020, but also taking action to keep people housed. In NYC, Mutual Aid NYC sprung into action. A multi-racial network of people and groups, it aims to share food, material and other resources “to support each other interdependently.”

In the Bay Area, The People’s Breakfast Program, initially founded in 2017 to distribute food to the unhoused, is now also working to address issues related to COVID-19, such as distributing masks and hand sanitizer. The South Berkeley Mutual Aid Project organizes food and supply deliveries to those who are unhoused; food deliveries to households; mask-making; and individualized assistance, such as grocery shopping for seniors and immunocompromised folks. Free Fridges and Free Pantries, also referred to as Freedges, have also sprung up in the East Bay and in San Francisco. Stocked with produce, these fridges provide fresh fruits and vegetables to local communities. Local radio station KPFA has an entire list of mutual aid and COVID-19 resources, updated regularly.

In the predominantly working class city of Tacoma in Washington State, the Tacoma Mutual Aid Collective was established to respond to COVID-19. The group, as Shane Burley reports, “formed quickly from people who wanted to create a strong system for supporting those most affected, and immediately started doing grocery and prescription pick-ups and deliveries for people who could not risk going out in public.”

In many areas on the West coast, the housing crisis has been exacerbated by wildfires. More than five million acres have burned, destroying or damaging many homes and taking lives.

Given the 45 percent uptick in hunger from 2019 to 2020, people are also working to self-organize food distribution. Together with other organizations, Fire Igniting the Spirit works to ensure food security for Indigenous communities, distributing food and supplies among five tribes in Oregon and Washington. Just last weekend, the effort reached more than one thousand families. The fact that COVID-19 relief funds from the Department of Treasury to tribes expire at the end of the year has intensified mutual aid.

During emergencies, disaster capitalism, whereby neoliberalism swoops in to privatize and profit precisely at moments of crisis, well-delineated in Naomi Klein’s Shock Doctrine (2007), is the flip side of the coin to mutual aid, well-argued in Solnit’s A Paradise Built in Hell or Hope in the Dark (2004).

In light of COVID-19, we are all facing unique challenges, but each one of us has different resources and skills we can contribute. What this moment offers, as any crisis does, is an opportunity to engage the needs of our neighbors and communities.

After all, a society will be measured by how it treats its most vulnerable members.

[Tina Gerhardt is an independent journalist and academic, who covers energy policy, climate negotiations, and related direct actions. Her work has been published at Climate Progress, Grist, The Nation, The Progressive, and the Washington Monthly.]