The debate over climate crisis, and more news and analysis from the Mideast, Asia, Africa, Europe and Latin America 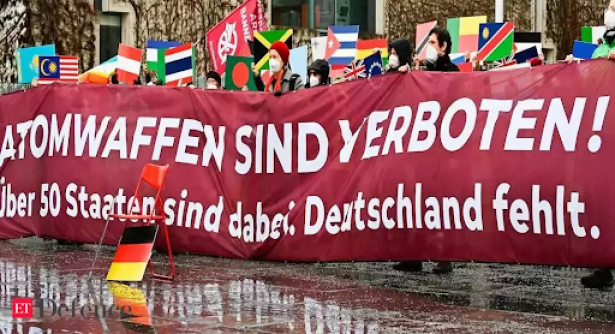 "Nuclear weapons are forbidden! More than 50 states have joined. Not Germany." Credit,AFP

The experience of the Arab Spring revealed that, despite the power of security and intelligence services - and their use of all means of torture, murder and violation of human rights for the sake of intimidation - the structure of Arab despotism is subject to breakage.

Will the goal of net zero emissions usher in much-needed transformation, or is this a foreshadowing of dangerous distractions to come?

Note: Indian development economist Ghosh has been appointed to a high-level UN advisory board that will provide recommendations for Secretary-General Antonio Guterres to respond to socio-economic challenges in the post-COVID-19 world.

Disarmament and peace campaigners won ratification of a treaty banning nuclear weapons on January 22. States party to the agreement cannot develop, test, produce, acquire, possess, stockpile, use, or threaten to use nuclear weapons.

The decision to finally change the name and move away from the acronym may allow members of the party to move away from their association with the guerrilla group and be considered as legitimate political actors.

After 19 days of an open-ended strike demanding their human and labor rights, Palestinian workers at Yamit have suspended their strike. The workers’ committee has reached this decision following an agreement with the company to meet their demands.

In recent years, the gender-inclusive politics of the 1990s has appeared to be primarily benefiting the incumbent National Resistance Movement party, rather than effecting any real change amongst the masses.

Unison, the UK’s biggest union, announced Christina McAnea had won its general secretary election and will become the union’s first woman leader. This was not greeted by those on the left who had hoped to see the union – and perhaps Labour – shift direction.

In Berlin and Thuringia the SPD, Greens and LINKE stick together in quarrelsome togetherness with a majority of seats, or close to one, and no credible alternatives. On the national level the three together now stand at only 42%.