How Biden Can Tackle the Climate Crisis

Joe Biden has promised to ensure climate justice, but will his administration rise to the challenge? With the Biden Administration pledging to take the climate crisis seriously, some grounds for optimism exist. 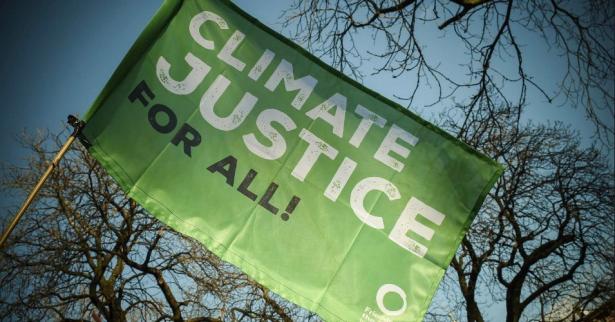 The Biden Administration has both the need and the potential to move forward quickly on the climate crisis., Photo: Friends of the Earth International

A first auspicious sign was President Joe Biden’s creation of two new positions: the U.S. Special Presidential Envoy for Climate, the first climate-focused appointment to the National Security Council, and the first National Climate Adviser, who will coordinate climate policy across the federal government. To the first post, Biden appointed John Kerry, former Secretary of State (2013-2017) and Senator from Massachusetts (1985-2013); and to the second, he appointed Gina McCarthy, who ran the Environmental Protection Agency during the Obama Administration.

“We look forward to having a representative who has insight into Indigenous issues and priorities, so that LANDBACK organizers can uplift our policy solutions and help fuel change that benefits all people and the planet.”

In addition to these two posts, Biden has rounded out his climate team with the following nominations: Jennifer Granholm for Secretary of Energy; Deb Haaland for Secretary of the Interior; Brenda Mallory for chair of the Council on Environmental Quality; and Michael S. Regan for head of the EPA. This team confirms that the administration will focus not only on addressing climate change but also on ensuring climate justice.

Even before he was elected, Biden was already moving in this direction. After establishing the Biden-Sanders Climate Task Force, co-chaired by Alexandria Ocasio-Cortez and John Kerry, he agreed to a wave of proposals, including a pledge to power the United States with  carbon-free sources by 2035. The task force, which adopted many of the benchmarks of the Green New Deal, reflects Biden’s openness to working with the more progressive lawmakers and representatives from nongovernmental groups.

That said, the work ahead is enormous. The Biden Administration needs to ramp up action to cut emissions from vehicles, power plants, farms, and homes. According to the EPA, the greenhouse gas emissions for 2018, the most recent year for which figures are available, break down as follows: transportation (28 percent), electricity (27 percent), industry (22 percent), commercial and residential (12 percent), and agriculture (10 percent).

If Biden wants to fulfill his pre-election promises to address climate change, action in the following areas could facilitate the transition to a low-carbon economy while also creating much-needed jobs.

Transportation: Not only could Biden undo Trump’s rollback of the Obama Administration’s emissions targets for vehicles, he could also set a target year for ending the production of diesel- and gasoline-powered vehicles. Canada, for example, declared in 2017 that, starting in 2040, vehicles sold in the country should produce no emissions. In December, Canada’s Minister of Environment and Climate Change, Jonathan Wilkinson, suggested a North America–wide ban on new fossil-fuel-powered vehicles. Japan announced recently that it plans to ban the sale of these vehicles by 2035. The United Kingdom, too, agreed to end the sale of them by 2030. Norway, one of the world’s largest exporters of oil, stated it would shift as early as 2025. In total, more than a dozen countries have set targets to end the sale of vehicles powered by fossil fuels. For Biden, ambitious targets here would go a long way.

National legislation would be essential to reducing carbon dioxide (CO₂) emissions. To that end, Representative Mike Levin, Democrat of California, and Senator Jeff Merkley, Democrat of Oregon, introduced the Zero-Emission Vehicles Act to the House in May 2019, and reintroduced it in October 2020 to the 116th Congress.

Even without national legislation, further opportunities for transition exist. For example, all federally owned and operated vehicles and public transportation could be shifted to electric.

Funding for public transportation could also be ramped up dramatically, to make it both more accessible and more affordable. The recent relief package included $45 billion in transportation funding: $16 billion for airlines, $14 billion for transit systems, $10 billion for state highways, $2 billion each for airports and intercity buses, and $1 billion for Amtrak. Like a food pyramid, this funding should be flipped on its head.

According to the American Public Transportation Association, ridership has increased by 28 percent since 1995. Public transportation systems could be overhauled to ensure smooth connections among trains, subways, and buses. Infrastructure for bicycling and walking could be expanded. For long distances, trains—a Biden favorite—could be supported, not only on the East Coast but also in the so-called Heartland, on the West Coast, and cross-country.

Renewable Energy: Of course, electric vehicles reduce CO₂ emissions only if the source of the electricity is carbon-neutral. Retooling the U.S. energy grid away from fossil fuels, such as coal and gas (including fracking), is critical.

According to the U.S. Energy Information Administration, energy use in 2019, the most recent year for which figures are available, broke down as follows: fossil fuels, 62.6 percent (natural gas, 38.4 percent; coal, 23.4 percent; petroleum, 0.4 percent); nuclear, 19.6 percent; and renewables, 17.6 percent. Biden’s original plan, the Biden-Sanders Task Force, and the Green New Deal all have framed renewable energy as a job creator and stated their commitment to union jobs.

Environmental Justice: Michael Regan, North Carolina’s environment secretary since 2017, was nominated to be head of the Environmental Protection Agency. He will be, if confirmed, the first African American man to head the EPA.

Regan would be in charge of regulating fuel-efficiency standards, emissions from power plants, and fossil-fuel projects. Regan brings with him a commitment to clean air and clean water, the lack of which disproportionately affects people of color and poor people. The shift to renewables will reduce many sources of air and water pollution.

“While leading the Department of Environmental Quality in North Carolina, Regan rightly pushed massive utility Duke Energy to clean up its toxic coal ash and fought Trump’s offshore oil drilling plans,” Lisa Ramsden, Greenpeace senior climate campaigner, tells The Progressive. “But he has a mixed record on environmental justice issues in the state, failing to protect communities from the health impacts of living near hog farms and approving multiple permits for the carbon-intensive wood pellet industry. Regan, and the rest of the Biden-Harris Administration, need to pair their lofty rhetoric on environmental justice with consistent action.”

Indigenous Rights: Biden’s nomination of Deb Haaland as Secretary of the Interior is historic and it could prove pivotal. Haaland is a member of the Pueblo of Laguna. It is the first time an Indigenous person will serve in the Cabinet. An Indigenous-led, nationwide movement urged Biden to appoint Haaland.

“[Haaland] will have the power to stand up to the corporations who have been influencing the Department for generations and causing the destruction of Indigenous lands,” says Nick Tilsen,  president and chief executive officer of the NDN Collective. “We look forward to having a representative who has insight into Indigenous issues and priorities, so that LANDBACK organizers can uplift our policy solutions and help fuel change that benefits all people and the planet.”

The Department of the Interior stewards 500 million acres, or one fifth of the land in the United States, and 56 million acres of those lands are held in trust for Native Americans. The land ranges from endangered species habitats to oil and gas drilling sites. Haaland could place a moratorium on onshore and offshore drilling on public lands, including the Arctic National Wildlife Refuge.

Industry: Manufacturing, food processing, mining, and construction offer many opportunities for removing CO₂ emissions, such as shifting energy sources and ensuring the energy efficiency of buildings and vehicles.

Brenda Mallory has been nominated to head the Council on Environmental Quality (CEQ). Previously, she served as director of regulatory policy at the Southern Environmental Law Center. The council oversees White House energy and environmental policies across federal agencies and monitors the environmental impacts of federal infrastructure projects, such as highways, pipelines, and new buildings. The review process is pivotal to ensuring the protection of public health and environmental justice.

“Mallory is now in a position to undo Trump’s gutting of the National Environmental Policy Act, which CEQ oversees, a move that made it easier for fossil-fuel infrastructure to get project approval,” says Natalie Mebane, associate director of 350.org. “She has signaled she will do so, and we expect her to follow through. We will work with her to ensure the administration delivers on their climate promises to the most impacted communities.”

Marcia Fudge, nominated as Secretary of Housing and Urban Development, could leverage federal power to ensure that housing at all levels and for all financial income brackets is retooled to be both energy efficient and powered by renewable energy.

Agriculture: Emissions from agriculture are often underestimated and might be as much as three times higher than the most recent official figure. These emissions are easier to reduce, given that the technologies for doing so already exist.

Investing in land-use practices that support sustainable farming, soil health, and family farms is key. Shifting from fertilizers and pesticides, which are carbon intensive to manufacture, to organic methods is important. Livestock is a large contributor to global greenhouse gas emissions, so reducing the methane emissions from cows could reduce overall emissions. A shift in agricultural practices could also ensure universal access to fresh and healthful food.

In one of his weakest picks, Biden has tapped Tom Vilsack, a well-known supporter of industrial farms, to be Secretary of Agriculture, a position he also held for eight years under Obama. But Vilsack could encourage the U.S. Department of Agriculture—which also manages the U.S. Forest Service—to boost reforestation. He could also strengthen the Supplemental Nutrition Assistance Program, run by the USDA, to meet the economic downturn and food insecurity caused by COVID-19 (and the previous administration’s handling of it).

Leadership: As the first chair of the newly created position of National Climate Adviser, Biden picked Gina McCarthy. While she headed the EPA during the Obama Administration, she put forward some of the administration’s most ambitious climate policies, including the Clean Power Plan and rules to increase the fuel efficiency of vehicles.

Most importantly, by centering the climate crisis the Biden Administration makes clear it views it not as a single issue, narrowly construed, but as a lens through which to view all else. Being mindful of how the climate crisis intersects with other issues—such as defense, education, foreign policy, health care, housing, and labor, to name a few—will be key to addressing it.

The Green New Deal exemplifies this approach with a call to provide “all people of the United States with—high-quality health care; affordable, safe, and adequate housing; economic security; and clean water, clean air, healthy and affordable food, and access to nature.”

The Biden Administration has both the need and the potential to move forward quickly on the climate crisis. So much depends on how well it does.

[Tina Gerhardt is an environmental journalist and academic who covers climate change, international climate negotiations and domestic energy policy, hurricanes and sea level rise. Her work has been published by Common Dreams, Grist, The Nation, The Progressive, Sierra and the Washington Monthly. Twitter: @TinaGerhardtEJ]