Republicans claim that the wave of GOP voter suppression laws sweeping across the nation are not a return to Jim Crow because they "apply fairly and equally" to everyone regardless of race and they don't contain explicitly racial provisions. 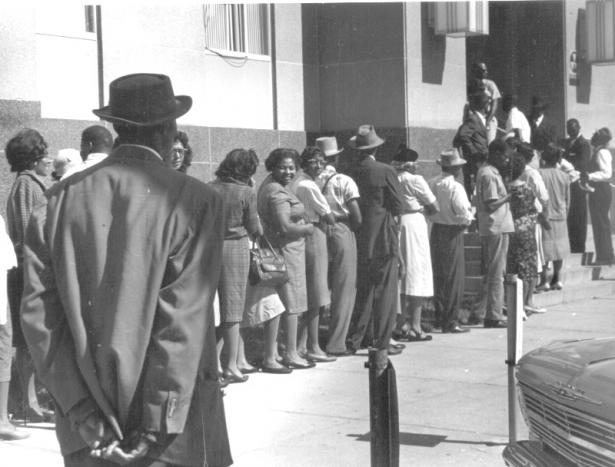 "Freedom Day" in Selma, 1963. Blacks line up and wait, hour after hour, at the courthouse to apply to register to vote. Most don't even reach the door before the office closes.,John Kouns, crmvet.org

One of the great achievements of the long civil rights movement was establishing a broad consensus that racism is evil. Trumpism is trying to roll back that social-accord — and as we saw in Charlottesville and on January 6th they have had some success in doing so. But for now, the majority of Americans still find explicit expressions of overt racism repugnant. Which is why today's white-supremacists assure their followers that if some law, action, or statement does not use a racial slur or make explicit mention of race it cannot be considered racist. Nothing illustrates this falsity of that premise better than Jim Crow voting laws — then and now.

Republicans claim that the wave of GOP voter suppression laws sweeping across the nation are not a return to Jim Crow because they "apply fairly and equally" to everyone regardless of race and they don't contain explicitly racial provisions. Similarly, back in the day, the political ancestors of today's Trumpites used to claim that the infamous literacy-tests were neither racist nor biased because everyone had to take them and — unlike the Dixiecrat segregation laws — they didn't mention race.

But the literacy tests were never equally applied to all. Some states imposed "grandfather clauses." If your grandfather was eligible to vote in that state you didn't have to take the test. Most whites were exempted — except for recent immigrants such as those "Damn Yankee carpetbaggers" with their dangerous notions about education for Colored children and a Freedmen's Bureau. But since the grandfathers of Afro-American citizens had all been slaves and thus ineligible to vote, every Black man (and woman after 1920) had to take and pass a literacy test. In states without grandfather clauses (or after the passage of time rendered them moot), Registrars (all of whom were white) were allowed to simply exempt whites from taking the tests if, in their sole opinion, they were "of good moral character." People of color, however, always had to take the test, and were routinely "failed" even when they got every question correct; but whites who did take the test were "passed" even if they were entirely illiterate.

Today, a new Georgia law makes it a crime to give water to people waiting for hours in long voting lines. As everyone knows, the long lines occur in the dense urban areas — Democratic strongholds with large nonwhite populations. That's because the Republican officials who control the state government give short-shrift to nonwhite precincts in the allocation of election resources like staff and modern machines. But less dense Republican-leaning suburban and rural precincts are favored with modern equipment and sufficient staff.

Back in the day, instances of Klan terrorism grabbed the headlines, but economic retaliation against Afro-Americans who tried to vote was far more pervasive. You had to apply to register to vote and before your application was granted your name was published in the local paper. That was to make sure all your employers, mortgage-holders, loan officers, business-suppliers, and landlords, were kept informed of this important event. White Citizens Councils, composed of bosses, bankers, businessmen, and landlords were organized to punish nonwhites who refused to withdraw their voter applications — firings, foreclosures, evictions, boycotts, and so on.

Today, economic pressure is more subtle. A new Texas law, for example, limits ballot drop-boxes to only one per county. Many states provide such boxes for the convenience of voters whose work-hours prevent in-person voting or who don't have the health or stamina for long lines. Under this new law, Harris County (Houston), a Democratic stronghold with 4,500,000 people, gets one box and so too does Loving County, population a mere 98 that went 90% for Trump. Webb County, where Biden got 60% of the vote is 95% Latino, 3300 square miles in area, and it can take an hour to drive to the county seat in Laredo. But most of the overwhelmingly-white, rural counties that went for Trump are less than a third that size and the drive to the courthouse is short. One box per county, regardless.

Fair to all? Really?

Fifty years ago, some southern counties used the "voucher" system. Even if you passed the literacy test, an already registered voter had to legally swear under oath that you were who you said you were and that you were honest and of good moral character before you could be added to the rolls. Since those counties had few, if any, nonwhite voters, and the Klan stood ready to retaliate against white "troublemakers" who dared vouch for a Black voter, no new Afro-American voters could be added to the rolls — even if some pesky federal court invalidated the test.

In North Carolina, all voters have to show an ID in order to vote. A new law now says that photo IDs from colleges, public assistance agencies, and all employee-IDs issued by county & municipal governments can no longer be used as voter-ID. Here's a hint — according to the state's own numbers, 316,000 registered voters do not have state-issued ID valid for voting. Students, welfare recipients, and low-wage government workers like trash collectors often can't afford to own cars and so they don't have drivers licenses — and they're more likely to be nonwhite and vote for Democratic candidates. The result is that 60% of those in North Carolina who previously voted but now cannot do so because of the ID law are registered Democrats.

The 20th Century literacy test scam rested on a fundamental falsehood that voters should be required to meet qualifications above and beyond citizenship. Dixiecrats justified imposing literacy tests by saying that for democracy to function voters had to be educated enough to understand the issues and assess the candidates.

Our response was that a basic principle of democracy is that all people — even the uneducated, even the nonwhite — are required to pay taxes and obey the law. Therefore, all who are subject to those laws must have the right to elect the legislators, sheriffs, and judges that enact and enforce them. And if voters need to be literate and educated to do so, then the state should provide a quality education to everyone instead of separate white and Colored school systems that were deliberately designed to keep a large portion of the Black population in perpetual servitude and forever ignorant of their rights.

Similarly, today's wave of Republican voter-suppression laws are based on the Big Lie that Biden "stole the election" from Trump through massive, multi-state, election fraud in which illegitimate urban voters (meaning nonwhite voters) cast illegal and multiple ballots for Biden (but not, apparently, for down-ballot Republicans). Yet the 2020 election was the most carefully investigated in American history and those multiple investigations  — performed by Republican officials in state after state — found no evidence of large-scale fraud. Despite all their Big Lie posturing, Republicans have yet to show a single actual instance of systemic fraud on a scale large enough to have affected the outcome of any 2020 race.

The ultra-conservative Heritage Foundation — a bastion of GOP disinformation — identifies and condemns eight types of election fraud: impersonation fraud, registration under a phony name, noncitizen & felon registration, voting more than once, fraudulent use of absentee ballots, illegal "assistance" at the polls (voter intimidation), altering vote counts, and buying votes. Yet neither they nor the Republican Party seem to have any problem with other forms of election fraud such as targeted purges of legitimate nonwhite voters, voter-ID laws designed to hinder those likely to vote Democratic, misinformation and tricks to suppress the vote for Democratic candidates, and violations of campaign finance laws. Nor do they mention the now completely legal use of "dark money" from hidden sources (including illegal sources such as foreign nationals and intelligence services) to finance attack-ad lies and distortions, disinformation troll farms, conspiracy-driven botnets, and other forms of crooked campaigning that undermine the foundations of democracy.

The bottom line is that the purpose of the literacy test system in the South was to deny voting rights to the great majority of nonwhite American citizens. The purpose of today's partisan voter-suppression laws is to reduce the number of nonwhite voters in a racially-polarized electorate so that victories go to the candidates, parties, and policies favored by white conservatives. Though the old and new methods and details are different, the political goal remains the same — maintenance of white-supremacy.

[From 1963-1967, Bruce Hartford was a Civil Rights Worker with CORE in California and then in Alabama and Mississippi on the staff of Dr. King's organization the SCLC. Later he was a student activist at San Francisco State College,then a freelance journalist covering the Vietnam War, and then an ILWU chief shop steward in the 1970s. He was a founding member and long-time officer of the National Writers Union in the '80s and '90s. Today he is webmaster of the Civil Rights Movement Archive (crmvet.org), on the board of the SNCC Legacy Project, and a local leader of an Indivisible chapter. He is author of, "The March on Washington for Jobs and Freedom" (2012), "The Selma Voting Rights Struggle & the March to Montgomery" (2014), "Voting Rights in America -- Two Centuries of Struggle" (2018), and "'Troublemaker' Memories of the Freedom Movement" (2019).]

Thanks to the author for submitting this article to Portside.