The latest Palestinian uprising firmly rejects the conquest and division of our people legally and geographically, into separate, besieged, apartheid parcels of land similar to the Bantustans of Apartheid South Africa. 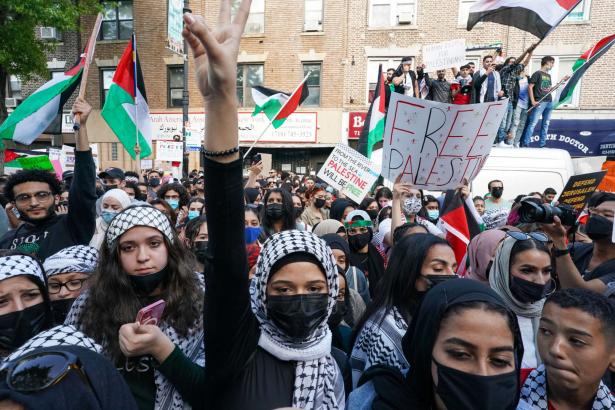 People gather for a demonstration to mark Nakba Day on May 15, 2021, in New York City., David Dee Delgado // Truthout

Palestinians everywhere are experiencing déjà vu right now, deep in our stomachs, while watching our people again resisting the erasure that Israel violently demands we accept, and knowing that many more will die.

As a mother myself, I wept while reading a mother in Gaza’s tweet that she had her kids sleep with her “so that when we die, we die together and no one would live to mourn the loss of one another”; while reading about a father trying to reassure his child asking if their home could be destroyed at night, telling her the bombs “can’t see us in the dark”; while imagining the unspeakable terror of being one of 2 million people packed like sardines in an open-air prison when the most advanced weapons of mass destruction are unleashed on you. Having lived through the Israeli invasion and siege of Beirut in 1982 as a small child, this kind of terror is embedded in my memory.

Together with this desperate sorrow and impotent rage, there’s also a familiar energy, a feeling that this is it. There’s no going back. The truth is bare. Our people can no longer contain their need to resist a settler colonial state that has trafficked in generations of dispossession, oppression and lies sold to justify our dehumanization.

It’s similar to the feelings that welled up throughout the U.S. last summer, as yet another Black person in the U.S. — George Floyd — was lynched by the state in public, on video, for an excruciating 9 minutes, and as Black communities rose up to declare an end to their oppression in a society that is racist to its core, a society that was built with the sweat and blood of their bodies on the stolen land of Indigenous peoples.

These are the moments when an oppressed people can no longer take it. Black and Indigenous people have been resisting their erasure and oppression all along. And so have Palestinians.

The latest Palestinian uprising firmly rejects the conquest and division of our people legally and geographically, into separate, besieged, apartheid parcels of land similar to the Bantustans of Apartheid South Africa. This latest uprising declares that all of historic Palestine is under some form of occupation, and that it must end.

My great-grandfather’s house in Jaffa lies partially in ruins, fenced off and unreachable, in the hands of the euphemistically named “Custodian of Absentee Property.” The theft of the houses of our grandparents who were driven from and prevented from returning to Jaffa in 1948 is part of the same brutal project as the ongoing violent evictions of hundreds of Palestinians from their homes by Israeli settlers backed by the state in Sheikh Jarrah, or Silwan in Jerusalem. It serves the same project as the demolition of the Bedouin village of Khan al-Ahmar or villages in the Negev, and the forced relocation of their people. It furthers the same aim as the expropriation of our lands to build illegal Jewish-only fortified settlements all over the West Bank. They all serve the same purpose: to remove one people in order to create an exclusivist, discriminatory, apartheid nation-state for another, in all the land from the river to the sea.

Young Palestinians here in the U.S. face enormous obstacles to speaking their truths.

That’s what this is about: a violent colonial project to replace the native population with another. The fact that the colonizer has been an oppressed people throughout history, whose survivors were reeling from an indescribable genocide carried out by European fascism, does not make it right.

And yet, even in this dark, terrifying moment, a new dawn feels possible. This feeling is what fuels my work with Palestine Legal to ensure that people in the U.S. — the belly of the settler-colonial empire that arms and funds Israel’s ethnic cleansing of Palestinians to the tune of $3.8 billion per year — can resist our complicity here. In the face of a massive campaign to suppress our movement through legislation, lawsuits, lies and intimidation, can we continue to truth-tell and, through grassroots organizing, create the kinds of shifts we are seeing when Representatives Alexandria Ocasio-Cortez, Cori Bush and Rashida Tlaib bear witness to our oppression in the chambers of the Capitol?

This generation rejects the notion that Israel as a Zionist entity can be reformed, just like the Movement for Black Lives rejects that inherently, structurally racist institutions like the police can be “reformed.”

As in Palestine right now, where young Palestinians are risking life and limb by leading the popular uprising, the growing movement for Palestinian rights in the U.S. has been fueled by a new generation of Palestinians, and more and more allies every day. It is a generation that is bold, unapologetic and unafraid, because it sees there is nothing left to lose. And it’s a generation of activists that’s connecting with historical and contemporary parallels of oppression, resistance, and radical imagining of another world founded on the collective liberation of Black, Brown, Indigenous, immigrant, LGBTQ, and other oppressed communities the world over.

And yet young Palestinians here in the U.S. face enormous obstacles to speaking their truths. When Ahmad Daraldik was elected to student senate at Florida State University, he was immediately and mercilessly attacked for his posts criticizing Israel based on his experience living under occupation. An Israeli-state-funded app directed people to complain he was antisemitic and demand his ouster. Florida politicians demanded the same, threatening university funding. He received dozens of threatening, racist, vile messages, calling for his castration and deportation. This has become the norm for Palestinians and their allies challenging Israel’s hegemony in the U.S. Facebook/Instagram’s shameful censorship is one measure of that.

That’s partly because of the threat young Palestinian and allied voices pose to this hegemony. This generation has no patience for willful ignorance or brazen racism, and it is also unafraid to shatter the platitudes of liberals who wring their hands about abuses of Palestinian rights but refuse to recognize that Israel as we know it would not exist and cannot continue to exist without those abuses and the U.S. government’s unconditional support. By definition, Zionism requires the destruction of Palestine and the erasure of the Palestinians to make a Jewish state. This generation rejects the notion that Israel as a Zionist entity can be reformed, just like the Movement for Black Lives rejects that inherently, structurally racist institutions like the police can be “reformed.”

So hear them now. This generation of Palestinians is showing us the path. They are talking to every one of us because all of us together hold the power. The only way out is to end the occupation, end apartheid, end the siege and destruction of Gaza, end the enduring dispossession of generations of Palestinians, acknowledge the historical injustices and repair them — by implementing the right of return, through reparations, and other restorative means. Because only then can we talk about genuine peace — not peace only for Jewish Israelis to enjoy at the expense of Palestinians under their colonial boot.

Palestinians — under occupation and in the diaspora — are asking all of us to witness and share their realities, to say their names, repeat their demands, end our complicity, and join in their visions for a new, decolonized, liberated future for all. Are you in?

[Dima Khalidi is a Palestinian born in Beirut and raised in the U.S. She’s the founder and director of Palestine Legal, a non-profit legal and advocacy organization working to protect people speaking out for Palestinian freedom from attacks on their civil and constitutional rights.]