No one should believe that Ilhan Omar thinks the United States is identical to the Taliban. Omar demonstrably did not say what she’s been accused of having said; what she did say was true... 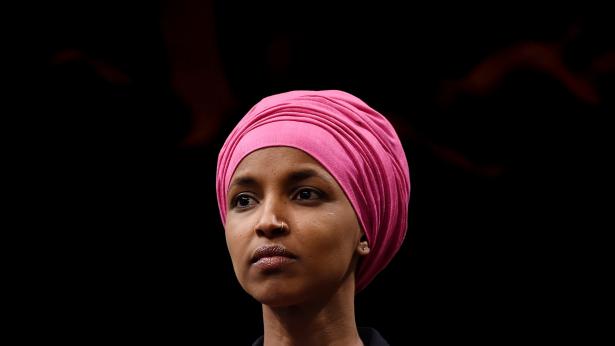 By the time Republicans and centrist Democrats had united late last week to scold Representative Ilhan Omar for a tweet—one of the few pastimes that still draw the two parties together, and something those selfsame chiders would doubtlessly decry, under different circumstances, as cancel culture or censorship—it no longer mattered what, exactly, Omar had said. They had already managed to make a news cycle out of it: mission accomplished.

Now, following Democratic outrage and Republican calls for a floor vote to strip Omar of her committee assignments, let me record the following for posterity: Omar demonstrably did not say what she’s been accused of having said; what she did say was true; and every politico using this opportunity to take a swing at her likely knows those two things—they just think you don’t.

What did Omar say? Context is key. In 2020, the Trump administration imposed sanctions on International Criminal Court prosecutors who moved to investigate potential U.S. war crimes in Afghanistan as well as potential Israeli crimes in the West Bank, East Jerusalem, and Gaza, arguing that because the U.S. and Israel aren’t members of the ICC, the court has no right to adjudicate such matters. (The ICC recognizes the State of Palestine as a party to its governing statute, a decision that the U.S. insists the ICC lacks the power to make.) Omar vocally opposed the sanctions—as did the European Union, the president of the ICC’s Assembly of States Parties, Senator Patrick Leahy, and, presumably, anyone skeptical of America’s willingness to look into its own savagery abroad.

During a June 7 budget hearing, Omar asked Secretary of State Antony Blinken a series of questions based on the ICC incident. First, Omar praised Blinken for lifting the Trump-era sanctions. Then she pointed out that he nevertheless still opposed an ICC investigation into war crimes in Afghanistan and Palestine—including, in the first case, offenses allegedly perpetrated by the U.S., the Afghan national government, and the Taliban; and, in the second, Israeli security forces and Hamas. Omar asked, “Where do we think victims are supposed to go for justice? And what justice mechanisms do you support?”

To which Blinken replied, more or less, that the U.S. and Israel are competent to adjudicate all of the above. This raised the obvious question Then why haven’t they?, but Omar’s time was up, and she politely yielded to the next representative.

Later that day, Omar’s official Twitter account shared a video and tweeted a paraphrase of the exchange. The tweet read, in its entirety: “We must have the same level of accountability and justice for all victims of crimes against humanity. We have seen unthinkable atrocities committed by the U.S., Hamas, Israel, Afghanistan, and the Taliban. I asked @SecBlinken where people are supposed to go for justice.”

Omar’s critics then alleged that, by mentioning the U.S., Israel, Hamas, Afghanistan, and the Taliban in a list of parties worthy of investigation for wartime atrocities, she had implied a moral equivalence, or an intolerable similarity between the two good actors (you don’t need me to point them out) and the bad ones.

Distance yourself from king and country, blood and soil; remember that Twitter forces concision, and ask yourself: Has the U.S. committed atrocities in Afghanistan? During his presidency, Donald Trump used his clemency powers to pardon soldiers and mercenaries who had murdered Afghan civilians, which strongly suggests that American soldiers and mercenaries had in fact killed civilians in Afghanistan. An Intercept investigation last year found that CIA-funded death squads have organized lethal raids resulting in the murder of children. And about the torture that the ICC alleges U.S. forces carried out in the aftermath of 9/11—who was it, again, who outright admitted that in those days, “we tortured some folks”?

The U.S. had its reasons. Everybody always does. Omar wasn’t supplying a list of all the bad actors in the world, or ranking the worst of them. She was arguing that the parties listed have something in common: They’ve all committed acts of violence during conflicts that exceed or violate international standards of just war. The crimes of the U.S. aren’t of the same magnitude as those of the Taliban. But what does that matter to the victims of American forces—or the victims of Israeli forces, or those of Hamas, or of Afghan national forces, or of the Taliban? It was on behalf of those people—the victims of wartime atrocities—that Omar posed her questions, and the only equivalence stipulated was theirs: an equality of pain, a likeness of suffering.

Even Omar’s Republican critics should have the capacity to understand what Omar was saying, in part because Trump at times was willing to recognize that the U.S. isn’t blameless on the world stage. When, during a 2017 interview with Bill O’Reilly, he was confronted with his overt support for Russian President Vladimir Putin, for instance, Trump put up a disarmingly frank retort: Sure, he seemed to submit, Putin is a killer. But “there are a lot of killers. You think our country’s so innocent?”

But Republicans’ crusade against Omar is no surprise. They spent all eight years of Barack Obama’s presidency panicked by a Black leader. Goaded by Trump himself, they claimed that Obama was a secret Muslim. Naturally, when presented with Omar, an actual Muslim, they wasted no time turning her into an object of fear and derision.

The Democrats going after Omar, on the other hand, are a more puzzling and, in some sense, more despicable species, because they belong to the party that takes umbrage when people of color seem to come in for unusually harsh attack. (And compare the treatment of Omar with that of Representative Betty McCollum, who in discussing her bill to restrict how Israel spends U.S. taxpayer dollars has drawn equivalences between “Jewish extremists and Palestinian extremists.”) Democrats should also know all about the art of making comparisons without claiming exact moral equivalence, because during the Trump years, they became fond of analogizing the U.S. president to extreme malefactors: According to Senator Tim Kaine, Obama referred to Trump as a “fascist”; President Joe Biden compared the man to the Nazi propagandist Joseph Goebbels; Representative Jerry Nadler called him a dictator; Representative Hank Johnson delivered a protracted Hitler riff in an NAACP speech.

So of course no one should believe that Omar thinks the United States is identical to the Taliban; she didn’t say that, and politicians draw comparisons between different states and political figures all the time, at any rate. To which the wise Hill operative will reply: The pileup was nonetheless good politics. Omar has been a passionate ally of Palestinians embattled by Israeli assaults on Gaza, a position that has won her as few friends in the donor class as her steadfast advocacy for the poor, if not fewer. For the Democrats, who seem to believe that their midterm fortunes rest as far from the left as they can possibly tack, knocking out Omar is just a convenient electoral move, and this ridiculous controversy merely a pretext. Maybe all they wanted was to bully her a little, remind the viewing public who’s behind the party’s wheel, in case anyone had worried that it would ever, in any universe, be somebody like Ilhan Omar.

Wisdom of the Hill aside, this strategy points up a major difference between the parties. While Republicans leave their most radical, extremist members—Representatives Marjorie Taylor Greene and Lauren Boebert, for instance—to cultivate their constituencies and influence the party, Democrats pick off their only honest lefties and coddle their pet right-wingers, such as Senators Joe Manchin and Kyrsten Sinema, in hopes of stopping the somewhat further right.

If the floor vote succeeds and Omar is removed from the House Foreign Affairs Committee, it will be a victory for Trump’s legacy and the Republicans who have always hated her, and for the centrist Democrats who so clearly wish that their party had no left flank to risk votes by sympathizing with the poor, the battered, the anonymous dead abroad, the disenfranchised, the weak—despite their oft-bellowed respect for just such underprivileged persons. It’ll be a win for the right and a demoralizing humiliation for the left, another tally in a populated category. Never has a political party traded so much principle for so little power.

[Elizabeth Bruenig is a staff writer at The Atlantic.]