A U.S. Army Veteran of Both the Vietnam and Afghanistan Wars Is Feeling a Strong Sense of Deja vu These Days

War profiteers in the United States grew fat and happy as they do in all wars, and that’s why the “Deep State” they occupy is now so angry at President Joe Biden for finally bringing an end to those once-swollen rivers of cash flow.

August 26, 2021 Joseph B. Atkins Labor South
Printer friendly
A U.S. Army Veteran of Both the Vietnam and Afghanistan Wars Is Feeling a Strong Sense of Deja vu These Days Published August 26, 2021 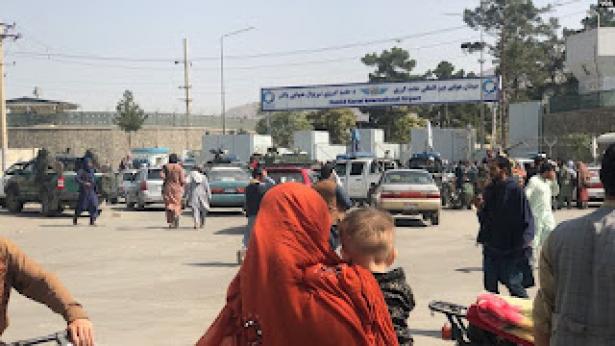 Civilians and Taliban fighters at the Kabul airport,

My old Army buddy Bob Mayton of Albemarle, North Carolina, is getting a strong sense of déjà vu these days. Every time he turns on the television and sees the thousands of desperate Afghans at the Kabul airport struggling to get out of their country, he remembers what happened in Saigon 46 years ago.

Just as Afghans risk their lives clinging to U.S. airplanes as they lift off, Vietnamese who’d worked with the U.S. military did the same as U.S. helicopters flew out of Saigon for the last time in April 1975.

“We have learned from history that we don’t learn from history,” Bob told me during a recent phone call. “Americans particularly.”

Bob, a teacher and historian, has the unique perspective of someone who served as a soldier both in Vietnam and Afghanistan, two long and losing wars that bookended a career that began in March 1971 and ended in December 2010. His service included both active duty and also years in the National Guard and Army Reserves and as both noncommissioned officer and officer.

He was in Afghanistan from June 2009 to May 2010, training Afghan infantry soldiers in logistics nd infantry tactics for the National Military Academy Afghanistan. He served in Vietnam from August 1971 to March 1973. He and I were in the same Army outfit in Plantation, Vietnam, in 1971 and part of 1972.

“When I left (Afghanistan) in 2010 I thought we were going down the tubes. I am amazed it lasted as long as it did. I saw the Afghan military wasn’t very motivated. It really wasn’t the military’s fault. … They knew about the corruption. They knew what was going on. They were involved in it, too.”

Over the 20 years of the U.S. involvement in Afghanistan, the U.S. government spent billions of taxpayer dollars on equipment, training, and the waging of a futile war, The equipment will now benefit the Taliban as it takes over the reins of government. War profiteers in the United States grew fat and happy as they do in all wars, and that’s why the “Deep State” they occupy is now so angry at President Joe Biden for finally bringing an end to those once-swollen rivers of cash flow.

“That is the ugly, ugly truth about the whole thing,” Bob said. “The military-industrial complex ran amuck. … The U.S. gave Afghans $50 million for spare parts, and we tried to teach them to requisition equipment. They get the $50 million to order spare parts and they wouldn’t do it. That money went somewhere. Into the pockets of officials. Some of that went on in Vietnam.”

As in Afghanistan, the years of U.S. investment in training South Vietnamese soldiers went to naught once the U.S. pulled out and the Communist North Vietnamese swept into Saigon.

However, Afghanistan is a much different country. In fact, it’s hardly a country at all.

“There are nine major tribes or ethnic groups in Afghanistan. It is not really a nation. It is a collection of tribes. Each tribe wants to do it their way. I don’t think the people as a whole are interested in a united Afghanistan.

“I was teaching infantry tactics, advanced individual training. The people came and went as they pleased. Guys would come in and find out they were going to Kandahar and go home, sell their uniforms and equipment. They’d wait a month or so and come back and go through it again. They didn’t want to go to Kandahar. That was where the Taliban was, and troops were getting with the program.

“The Afghan people I met on the surface were nice people, and they appreciated what we were doing, but their heart wasn’t in it (the war).”

Bob feels the U.S. withdrawal could have been handled better, but “I think there is probably some truth in what Biden said about not tipping off the Taliban with an earlier withdrawal. I like Biden, but I think it could have been better planned.”

Bob worries about the Afghans left behind and particularly Afghan women, who now face the religious zealotry of the Taliban. “I worry that the schools for women are going to be gone.”

What’s also worrisome is the fact that this could all happen again.

“I’d like to say no but hell no, but I think it will happen again.”

And when it does, perhaps some young soldier who served alongside Bob in Afghanistan will serve in that future war as well, and he, too, will be experiencing the same sense of déjà vu that Bob is feeling today.

[Joseph B. Atkins is a veteran journalist and writer who teaches journalism at the University of Mississippi. He is the author of Harry Dean Stanton: Hollywood’s Zen Rebel (University Press of Kentucky, 2020), and the novel Casey’s Last Chance (Sartoris Literary Group, 2015). His blog is http://www.laborsouth.blogspot.com and he can be reached at jbatkins3@gmail.com ]