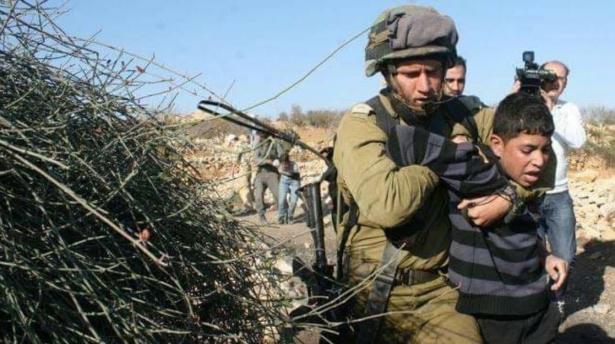 Israeli Defense Forces (IDF) troops arresting a Palestinian child. Between 2017-2019, Israeli security forces in the West Bank and in East Jerusalem arrested 5,000 Palestinian minors between the ages of 12 and 18, following similar detention methods,to those used in the arrest of adult suspects. (Ynet News)

The organisations include: Addameer Prisoner Support and Human Rights Association, Al-Haq Law in the Service of Man (Al-Haq), Bisan Center for Research and Development, Defense for Children International-Palestine (DCI-P), the Union of Agricultural Work Committees (UAWC), and the Union of Palestinian Women’s Committees (UPWC).

Still, despite international condemnation by the UN, international human rights groups, and government officials, the Israeli occupation has doubled down in their crackdown and issued a military order that outlaws, entirely, the six Palestinian organisations in the West Bank.

The designations target six of the most eminent Palestinian human rights defenders engaged in critical human rights work and cover all aspects of civil society in the Occupied Palestinian Territory (OPT). Addameer serves as one of the biggest organizations providing direct legal support to Palestinian political prisoners.

The vital work of these six organizations to protect and empower Palestinians and hold Israel accountable for its gross human rights violations and aparthied regime of institutionlised racial discrimination is precisely the work that Israel is trying to end. Israel’s designation of these six Palestinian organisations as “terrorist” groups, and the military order that outlaws them places the safety of the organisations and their staff at imminent risk.

The military order allows for Israeli occupation forces to raid their offices, forcibly shut them down, arbitrarily arrest their staff to be tried under Israeli military courts, and institute other reprisals including travel bans and residency revocations against their members.

The threat of retaliation is real, and puts at risk not just the organizations themselves, but the entire Palestinian civil society and the tens of thousands of Palestinians they serve everyday. To this end, we call on all persons of conscience across the globe to stand with us. We call on the international community to #StandWithThe6 and protect Palestinian human rights defenders, and demand that Israel rescind the terrorist designations immediately.

This statement is supported by more than 100 signatories. The full list is below: