A dress rehearsal for fascism, or did we just miss the opening credits? 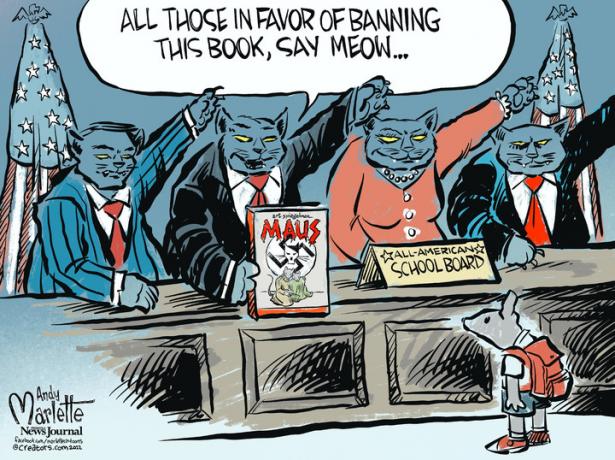 The Great Book Banning of 2022

It’s Politics  By Elizabeth A. Harris and Alexandra Alter, The New York Times

Love it or hate it, twee is back. It’s the subject of innumerable think pieces, but the subculture’s radical roots in feminism, punk, and the fight against Margaret Thatcher often go unnoticed.

Fascists on the Ballot

At least 57 individuals who played a role in the Jan. 6 storming of the Capitol — either by attending the Save America rally that preceded the riots, gathering at the Capitol steps or breaching the Capitol itself — are now running for elected office.

The use of artists by developers to distract from the negative effects of displacement is commonly referred to as “artwashing” — and it is exactly what organizers describe took place in Manhattan’s Chinatown a decade earlier.

To Be Young, Left and Marginalized

Although young leftists fighting for a better world will never cease, let’s hope that older generations, particularly those who are fellow socialists, will at the very least see our concerns and voices as legitimate and valuable.

By Peter Manseau
The Baffler

With both guns and Covid, many of our fellow citizens would trade a million lives for their need to do exactly what they want. There has emerged in some of the rhetoric surrounding Covid an eerie resonance with school shootings, the shared expression of a uniquely American death wish.

Is Don’t Look Up a Documentary?

If the Hollywood Global Disaster Movie reinforces the message that the US deserves to monopolise the world’s resources because it will step in to protect humanity when needed, Don’t Look Up depicts US elites as ideologically, culturally and technologically incapable of the most basic acts of self-preservation, let alone saving the rest of the world.

Is Succession a Reality Show?

By Priyam Marik
The Wire

When a Loved One Drinks the Kool-Aid

My sister-in-law texted me to warn me that my brother was heading, unannounced, to my doorstep in Idaho. I knew he believed “everyone on the planet who received the vaccine will be dead in a few years,” but I had no idea of the depth of his fantastical beliefs.

Other than, I guess, Abraham Lincoln or Jesus Christ, the current go-to-guy for a quick symbolic fix of history, spirituality, and spectacle is that heavyweight boxer who called himself The Greatest.