The right-wing supermajority on the Court is the result of a movement determined to seize power at any cost. It's time to critically assess and reconfigure the Court’s role in our society. Our democracy depends on it. 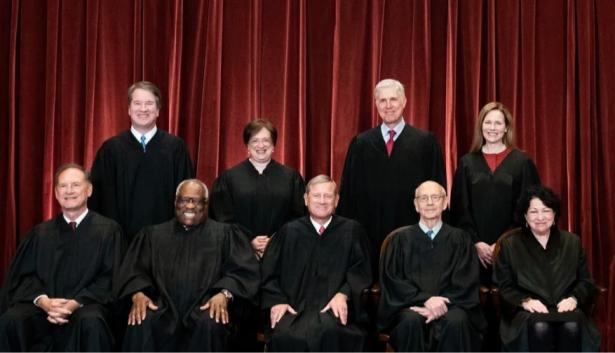 In a one-paragraph decision issued in January, the Supreme Court ruled that former president Donald Trump was required to turn over documents to the House committee investigating the January 6 insurrection. It was an unsurprising decision, described by commentators as “entirely consistent with existing law.” In a Supreme Court where a third of the members were appointed by Trump, only Clarence Thomas noted his dissent. Thomas would have permitted the Trump White House to shield its records from congressional scrutiny.

Initially, Thomas’s dissent was notable but not shocking. Thomas is a staunch conservative, frequently willing to go further to advance the right-wing agenda than many or all of his colleagues on the bench. But over the last several months, new reporting has suggested that Thomas’s dissent may not have stemmed strictly from a different interpretation of the relevant law.

Reporting has revealed that Thomas’s wife, far-right activist Ginni Thomas, was deeply involved in efforts to overturn the 2020 election results, going so far as to pressure at least lawmakers in Arizona to overturn the outcome in their state. Legal ethics experts from across the political spectrum agree that Thomas had no business ruling in a case so directly tied to his wife’s political activity — but he did so anyway.

As egregious as Justice Thomas’s refusal to recuse is, it is merely the latest display of the current Supreme Court’s illegitimacy. The creation of a 6-3 radically conservative supermajority on the Court is the result of a conservative legal movement determined to seize power at any cost.

In a 2016 presidential debate, Trump plainly stated that his Supreme Court nominees would vote to overturn Roe v. Wade. He said, “If we put another two or perhaps three justices on, that is really what will happen. That will happen automatically in my opinion. Because I am putting pro-life justices on the court.” Six years later we are on the precipice of that plan becoming a reality.

Each of those “two or perhaps three justices” appears likely to help overturn Roe, according to a majority draft opinion leaked last month. And each of those three justices occupies a seat on the bench because of bad-faith practices by conservatives.

After the death of Justice Antonin Scalia, Senate Republicans began an unprecedented blockade of Merrick Garland, then president Barack Obama’s nominee to the Supreme Court. The Republican majority refused to fulfill their duty to hold hearings and vote on a judicial nominee. Garland’s nomination was stalled for a stunning 293 days before expiring on January 3, 2017. Trump assumed office shortly after and within weeks nominated Neil Gorsuch to be the next Supreme Court justice.

A little over a year later, Justice Anthony Kennedy announced his retirement from the bench. Trump nominated Brett Kavanaugh as Kennedy’s reportedly hand-selected successor. Before Kavanaugh was confirmed, Christine Blasey Ford came forward alleging that he had sexually assaulted her when the two were in high school. Two additional women subsequently came forward with sexual misconduct allegations. Following Kavanaugh’s denials (and following what Blasey Ford’s lawyers called a “sham” FBI investigation), he was confirmed to a lifetime seat on the Supreme Court.

Only two years later, Trump had the opportunity to appoint yet another justice. Just eight days after the passing of Justice Ruth Bader Ginsburg, Trump nominated his final Supreme Court pick, Amy Coney Barrett, despite the fact that the 2020 presidential election was just 38 days away. The irony of Senate Republicans blocking Garland's nomination for nearly a year only to turn around and swiftly force now Justice Barrett’s confirmation through was rich, to say the least.

Failures to recuse in cases of conflicts of interest. Holding seats open in the case of Democratic nominees and rushing to fill seats in the case of Republican nominees. Allegations of sexual misconduct and “sham investigation" of said claims. Taken together, it’s no wonder the Supreme Court is facing a crisis of legitimacy.

Six conservative lawyers in robes are poised to massively upend life in the United States. It appears all but certain that the Supreme Court will end constitutional protections for abortion access within the month. If that happens, the Center for Reproductive Rights has noted that “abortion rights would be protected in less than half of the U.S. states and none of the U.S. territories,” which would disproportionately harm low-income people and Black and brown people.

And abortion is just the beginning: Legal experts warn that the legality of Plan B and various forms of birth control may soon be in jeopardy. And, as President Joe Biden has said, from there it’s just a short jump to ending constitutional protections for same-sex marriage.

Decisions about intimate relationships and reproduction aren’t the only things on the Supreme Court’s agenda. The gun-friendly conservative majority may be on track to expand the public’s ability to access and carry firearms. Some advocates say that the Court is gearing up for “a relentless effort…to transform gun regulation around the United States,” preparing to dramatically limit state and local government's ability to pass laws regulating the ability to carry firearms.

In West Virginia v. EPA, in which a decision is also expected this month, the conservative justices appear likely to severely limit the federal government’s ability to respond to climate change. Environmental law experts warn that the far-right Supreme Court is poised to say that federal agencies like the Environmental Protection Agency no longer have the discretion to enact rules and regulations aimed at addressing the biggest issue of our time.

Unelected, unaccountable judges are on the verge of limiting our ability to fight climate change while forcing people to birth unwanted babies in a world with almost unlimited access to deadly weapons. It’s perhaps no wonder that a majority of Americans disapprove of the Supreme Court.

We are in a crisis moment — and it’s only getting worse. We must treat this Court as the emergency that it is. And that starts with structurally reforming the Court. The most impactful way to do that in the immediate term is to pass the Judiciary Act of 2021, which would add four seats to the Supreme Court. Further, we have to require transparency and accountability from justices who refuse to disclose conflicts of interests and recuse themselves when those conflicts are present.

Beyond the immediate term, we need to prioritize putting power back in the hands of democratically accountable individuals. As Harvard law school professor Niko Bowie shared with the Presidential Commission on the Supreme Court of the United States, the “Supreme Court is an anti-democratic institution.… The Court has wielded an anti-democratic influence on American law, one that has undermined federal attempts to eliminate hierarchies of race, wealth, and status.”

The time to critically assess and reconfigure the Court’s role in our society is now. Our democracy depends on it.

Molly Coleman is the co-founder and executive director of the People's Parity Project, a nationwide network of law students and new attorneys organizing to unrig the legal system and build a justice system that values people over profits.

Tristin Brown is the policy & program director at the People's Parity Project.

Stay up-to-date with the politics team. Sign up for the Teen Vogue Take