With Ads, Imagery and Words, Republicans Inject Race Into Campaigns

Running ads portraying Black candidates as soft on crime — or as “different” or “dangerous” — Republicans have shed quiet defenses of such tactics for unabashed defiance. For the Trumpers it was always about all about race. 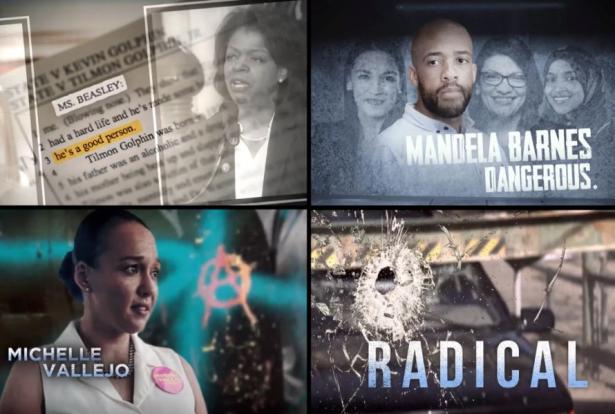 As Republicans seize on crime as one of their leading issues in the final weeks of the midterm elections, they have deployed a series of attack lines, terms and imagery that have injected race into contests across the country.

In states as disparate as Wisconsin and New Mexico, ads have labeled a Black candidate as “different” and “dangerous” and darkened a white man’s hands as they portrayed him as a criminal.

Nowhere have these tactics risen to overtake the debate in a major campaign, but a survey of competitive contests, particularly those involving Black candidates, shows they are so widespread as to have become an important weapon in the 2022 Republican arsenal.

In Wisconsin, where Lt. Gov. Mandela Barnes, who is Black, is the Democratic nominee for Senate, a National Republican Senatorial Committee ad targeting him ends by juxtaposing his face with those of three Democratic House members, all of them women of color, and the words “different” and “dangerous.”

In a mailer sent to several state House districts in New Mexico, the state Republican Party darkened the hands of a barber shown giving a white child a haircut, next to the question, “Do you want a sex offender cutting your child’s hair?”

And in North Carolina, an ad against Cheri Beasley, the Democratic candidate for Senate, who is Black, features the anguished brother of a white state trooper killed a quarter-century ago by a Black man whom Ms. Beasley, then a public defender, represented in court. The brother incredulously says that Ms. Beasley, pleading for the killer’s life, said “he was actually a good person.”

Appeals to white fears and resentments are an old strategy in American elections, etched into the country’s political consciousness, with ads like George Bush’s ad using the Black convict Willie Horton against Michael Dukakis in 1988, and Jesse Helms’s 1990 commercial showing a white man’s hands to denounce his Black opponent’s support for “quotas.”

If the intervening decades saw such tactics become harder to defend, the rise of Donald J. Trump shattered taboos, as he spoke of “rapist” immigrants and “shithole countries” in Africa and the Caribbean. But while Republicans quietly stood by advertising that Democrats called racist in 2018, this year, they have responded with defiance, saying they see nothing untoward in their imagery and nothing to apologize for.

“This is stupid, but not surprising,” said Chris Hartline, a spokesman for the Republican Senatorial Committee, whose ads in North Carolina and Wisconsin have prompted accusations of racism. “We’re using their own words and their own records. If they don’t like it, they should invent a time machine, go back in time and not embrace dumb-ass ideas that voters are rejecting.”

But some of the Republican arguments could scarcely be called serious policy critiques.

This month, a Republican senator, Tommy Tuberville of Alabama, said Democrats favored reparations “for the people that do the crime,” suggesting the movement to compensate the descendants of slavery was about paying criminals. And Representative Marjorie Taylor Greene, Republican of Georgia, made explicit reference to “replacement theory,” the racist notion that nonwhite, undocumented immigrants are “replacing” white Americans, saying, “Joe Biden’s five million illegal aliens are on the verge of replacing you.”

Such language, as well as ads portraying chaos by depicting Black rioters and Hispanic immigrants illegally racing across the border, have prompted Democrats and their allies to accuse Republicans of resorting to racist fear tactics.

Democrats themselves are dealing with intraparty racial strife in Los Angeles caused by a leaked recording in which Latino leaders are heard using racist terms and disparaging words toward their Black constituents.

But it is Republicans’ nationwide focus on crime that is fueling many of the attacks that Democrats say cross a line into racism.

The conservative group Club for Growth Action, backed by the billionaires Richard and Elizabeth Uihlein, Diane Hendricks and Jeff Yass, pointed with pride to the crime ads it has run against Ms. Beasley. “Democrats across the country are getting called out for their soft-on-crime policies,” said the group’s president, former Representative David McIntosh. “Now that their poor decisions have caught up with them, they’re relying on the liberal media to call criticisms of their politically inconvenient record racist, and it won’t work.”

The 2022 midterms include the most diverse slate of Republican congressional candidates ever, competing against Democratic candidates who would add to the House’s representatives of color and improve on the Senate’s lack of diversity. But it is also the first cycle since Mr. Trump’s presidency, when he set a sharply different tone for his party on race.

It was at a rally with Mr. Trump in Arizona this month that Mr. Tuberville and Ms. Greene made their incendiary comments. At another rally in Wilmington, N.C., late last month with a Senate Republican candidate, Representative Ted Budd, Mr. Trump told the audience that President Vladimir Putin of Russia had mentioned “the N-word. You know what the N-word is?” When the audience hooted, he corrected them, “No, no, no, it’s the nuclear word.”

Still, a rise in violence recently has given openings to both parties.

In North Florida, a flier distributed by a Democratic group depicts the face of a Black Republican, Corey Simon, who is challenging a white state senator, on what Republicans have called a shooting target and Democrats call a school easel, with bullets shown strewn underneath. The message was about gun control and school shootings, staples of Democratic campaigns, and identical mailers targeted two other Republican candidates, who are white and Latino.

Republicans say their attacks are capturing voters’ anxieties, not feeding them.

Defending Mr. Tuberville, a former football coach at Auburn University, Byron Donalds of Florida said crime had become a leading issue because of “soft-on-crime policies and progressive prosecutors in liberal cities.” Mr. Donalds, one of two Black Republicans in the House, added, “As a coach and mentor to countless Black men, Tommy Tuberville has done more to advance Black lives than most people, especially in the Democratic Party.”

Ms. Greene and Mr. Tuberville did not respond to requests for comment.

Then there is the Republican mailer in Wisconsin that clearly darkened the face of Mr. Barnes.

“If you can’t hear it when they pick up the bullhorn that used to be a dog whistle, you can see it with your own eyes,” said Mr. Larson, the Wisconsin state senator.

The darkening of white hands in a stock photo of a barber on a Republican mailer in New Mexico prompted outrage there. The New Mexico Republican Party said that Democrats were trying to divert attention from their record on crime. A Republican leader in the state House of Representatives, Rod Montoya, told The Albuquerque Journal that the hands were darkened to make the fliers “gloomy.”

Some liberal groups do seem intent on discerning racism in any message on crime. After Gov. Kim Reynolds of Iowa, who is white, ran an ad opening with a clip of Representative Cori Bush of Missouri, who is Black, calling for defunding the police, Iowa Democrats called it racist because Ms. Reynolds’s Democratic challenger, Deidre DeJear, is also Black, and, as she has said, bears a resemblance to Ms. Bush.

“Crime in America has always, at least in modern times, been racially charged,” said Christopher Scott, chief political officer at the liberal group Democracy for America. “The ads aren’t getting to policy points. They are images playing on their base’s fears.”

But the policy differences between the two parties are real. Democrats have pushed for cashless bail, saying the current system that requires money to free a defendant before trial is unfair to poor people. Republicans say cash bail is meant to get criminals off the streets. Democrats have expressed solidarity with racial justice protesters and helped bail out some who were arrested after demonstrations over the murder of George Floyd turned destructive. Republicans have said those actions condoned and encouraged lawlessness.

Skin color is beside the point, said Jonathan Felts, a spokesman for Mr. Budd’s campaign in North Carolina, as he defended the blitz of crime advertising against Ms. Beasley. One ad toggles between images of white children — victims of brutal crimes — and the face of Ms. Beasley, her expression haughty or bemused.

“The images used in the ad match up to the victims of the criminals she went easy on,” Mr. Felts said. “Are you suggesting the ad makers should make up fake victims, or are you suggesting she shouldn’t be held accountable for her judicial and legal record?”

In fact, the judicial and legal records portrayed in at least one of the ads have been determined to be distorted, at best. The first version of the Republican Senatorial Committee’s ad, which portrayed child crime victims from different races, was pulled down by North Carolina television stations in June after they agreed that some of the assertions were false. In a later version, the committee made slight word changes to satisfy the channels but added a more overt racial contrast.

“All communities are concerned about public safety,” said State Representative Brandon Lofton, a Democratic Black lawmaker whose South Charlotte district is largely white. “There is a way to talk about it that is truthful” and does not cross racial lines, he said.

The campaigns themselves have steered clear of charging racism.

Dory MacMillan, a spokeswoman for Ms. Beasley, said, “Our race remains a dead heat, despite Congressman Budd and his allies’ spending millions of dollars to distort Cheri’s record of public service.”

In Wisconsin, a spokeswoman for Mr. Barnes, Maddy McDaniel, similarly declined to go further than to say that “the G.O.P.’s fear-mongering playbook failed them last cycle, and it will fail again.”

Mr. Barnes, for his part, seemed to make playful use of his portrayal in one of the Republican attack ads as “different” during his first debate with Senator Ron Johnson, the two-term incumbent. He was, indeed, different, Mr. Barnes said, “We don’t have enough working-class people in the United States Senate.”

[Jonathan Weisman is a congressional correspondent, veteran Washington journalist and author of the novel “No. 4 Imperial Lane” and the nonfiction book “(((Semitism))): Being Jewish in America in the Age of Trump.” His career in journalism stretches back 30 years. @jonathanweisman]