MLK's Call to Honor Peace, Justice and Our Planet Still Challenges Us

Thousands of peace, social justice and environmental activists from around the world will gather in New York City from April 24-26 for the Peace and Planet Mobilization for a Nuclear-Free, Peaceful, Just and Sustainable World - challenges articulated by Dr. Martin Luther King. Peace and Planet convenes prior to the April 27 - May 22 Nuclear Non-Proliferation Treaty Review Conference at the United Nations, bringing the voice of civil society to the governmental confab. 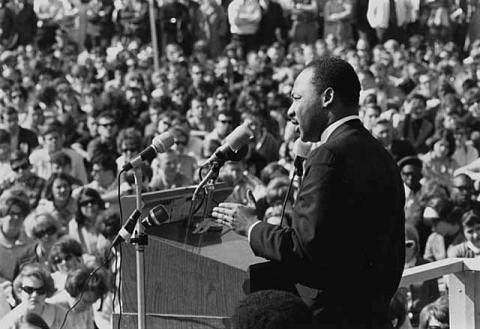 April 4 marked the 47th anniversary of the assassination of Dr. Martin Luther King Jr. A tragic anniversary to be sure, but also an occasion to recall and be inspired anew by one of the most ardent champions of nonviolence, social justice and peace the United States has ever known.

Exactly one year before his death, at Riverside Church in New York City, King delivered one of his most important speeches, "Beyond Vietnam: A Time to Break the Silence," a clarion call for an end to war abroad and social and economic justice at home. You can read the speech or listen to the audio recording here.

There are many highlights of the speech, but the following three stand out for us:

Thousands of peace, social justice and environmental activists from around the world will gather in New York City from April 24-26 for the Peace and Planet Mobilization for a Nuclear-Free, Peaceful, Just and Sustainable World to address the challenges and make the connections so prophetically articulated by King. Peace and Planet convenes just prior to the April 27 to May 22 Nuclear Non-Proliferation Treaty Review Conference (NPT RevCon) at the United Nations, to bring the voice of civil society to the governmental confab.

The NPT RevCon, held every five years, is crucially important to world peace and security, addressing issues of nuclear non-proliferation and disarmament, including the absolute refusal by the United States and other nuclear-armed states to pursue nuclear disarmament as required by Article VI of the treaty. This has prompted lawsuits by the Republic of the Marshall Islands, and demands from the majority of the world's nations that the nuclear weapon states make meaningful progress on their disarmament obligation. With the United States and Russia rattling their nuclear sabers over Ukraine, tensions in the region have risen to levels not seen since the Cold War. Peace and Planet calls upon the parties to the NPT to use the 2015 RevCon to immediately, without delay, develop a time-bound framework for negotiating the total ban and elimination of all nuclear arsenals.

A particularly troubling issue facing this year's RevCon is the failure to convene a conference on a Middle East Weapons of Mass Destruction-Free Zone by 2012, which was critical to reaching consensus on the Plan of Action adopted at the 2010 RevCon. The conference is still not scheduled. With the ongoing P5+1 talks with Iran (a non-nuclear weapons state party to the NPT) over its nuclear program (while Israel, the only nuclear-armed state in the region, remains outside the treaty), chemical weapons use in Syria and escalating wars in the Middle East, a conference to ban nuclear, chemical and biological weapons in the region could hardly be more timely.  The recent historic breakthrough agreement between the P5+1 and Iran, while very promising (assuming hawks in Congress don't torpedo it before the deal is finalized), does not obviate the need for a Middle East WMD-Free Zone. US failure to take leadership in convening the conference has placed the outcome of this year's RevCon in jeopardy, and many of the world's governments question whether Washington can be trusted. The RevCon should reaffirm this commitment and demand that the conference be convened as soon as possible.

Peace and Planet's agenda is necessarily broader than that of the NPT RevCon, as, like King, we understand the links between the urgent need for nuclear disarmament, ending wars and overcoming militarism while addressing critical racial, economic and social justice issues, and now, arresting climate change. Peace and Planet activities will include a conference at the historic Cooper Union in Manhattan, a march, a rally and peace festival near the United Nations, and citizen advocates bringing the pro-peace and justice voice of civil society to the governmental delegates meeting inside the UN. We invite all concerned about peace, justice and our precious earth to join us.

Thanks to the authors for sending this to Portside.]