The Middle-East map is being redrawn in Syria and Iraq by Moscow and Washington. The Obama Administration is co-leading with the Kremlin to help slice the Syria-Iraq area into five or more political states so as to deconflict this region and hopefully reduce the attractiveness of ISIL. 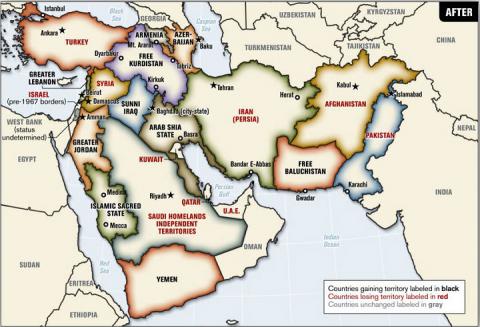 This map was proposed in 2006 - to redraw the borders of the Middle East by Ralph Peters, a retired United States Army lieutenant colonel, author, and Fox News commentator. It was published in the Armed Forces journal., Armed Forces Journal, via wikimedia

The Mideast map-redrawing `Act One' has begun. Ba'athist/Alawite Syria, Sunni Syria, Kurdistan, Sunni Iraq and Shi'a Iraq are the first batch of new `states' to be formed as the Obama Administration has finally accepted Russia's role in preserving a Ba'athist Syrian state for the Alawis - the religious sect who makes up about 12% of Syria's population and remains "loyal to the (Assad) regime even as the economy deteriorates" [Note 1].

Without some sort of compromise beforehand, it is common diplomatic sense that the Obama-Putin private meeting on September 29 could not have crystallized. The picture turned clear when Secretary of State John Kerry and Russian Foreign Minister Sergei Lavrov, "standing shoulder to shoulder somewhere in the United Nations building" on September 30, announced their common vision of resolving Syria's war through "political process", thus sealing "an American stamp of legitimacy on Russia's Syria intervention" [Note 2].

After having hammered out the Iran deal in July, Washington has already been on a set-go position to redraw the Mideast map [Note 3].  What has probably speeded up the move is the rather sudden large influx of Muslim refugees flooding Europe's heartland since early September. Despite Germany's bravo opening of gates, it is beyond everyone's imagination how the United States' European allies could absorb, let alone assimilate, one to two million non-Christian immigrants. Consequently, such a gigantic pressure on the White House to "ease the humanitarian burden" [Note 4] on the allies' shoulders is so unbearable to the extent that President Obama must drop the ideal of having "Bashar al-Assad and his supporters . forced from power" [Note 5] and then, as reported on Sept 23, "decided to meet with . Putin in New York, if it can be arranged, for their first face-to-face encounter in nearly a year" [Note 6], even though he still insisted Assad must go in his United Nations speech.

The Russian air strikes in Syria mean that Moscow is attempting to grab as much land as possible on Assad's behalf during the transitional period which was probably agreed at the Kerry-Lavrov meeting in order to cultivate a fait accompli for the Alawite Syria with Damascus as its capital city. While it is uncertain whether Assad may step down or not, it seems the ruling Arab Socialist Ba'ath Party would stay in power.

The rationale behind President Obama's reluctant but sensible acceptance of Russia's direct intervention is very simple, namely, the Alawite-Sunni dichotomy. The in-power Alawis are a religious sectarian minority, whereas the Sunni Muslims comprise over 70% of the population.    Since "the dominant Sunni tradition has always considered Alawites as infidels", the (Ba'athist) regime, because of its secular character and the fact that it is dominated by members of the Alawite minority, never enjoyed any kind of religious legitimacy among Sunnis" [Note 7]. Given neither side can knock out each other after almost five decades, a quick fix before the Sunni Muslim refugee problem will get worse in Europe is to let both sides settle down in newly bordered territories in certain form of secession jointly masterminded by Obama and Putin.

On October 9, when the Washington officials revealed their plan "to assemble a group of Sunni tribes in a `Syrian Arab Coalition' to fight alongside Syrian Kurdish forces against the Islamic State" [Note 8], there was no mention of fighting the Assad government. It is apparently a more mature plan to, after the compromise with Moscow, tailor-make a cradle for upbringing a Sunni political party with a view of governing a new Syrian state, hopefully with Aleppo as its capital city.

A peaceful co-existence between the two new regimes in Syria would gradually stabilize this war-torn country, thus not only alleviating the pain of the indigenous Sunni Syrians but also inducing those refugees being adrift in Europe to return home.

The Kurds, despite bloodshed everywhere, benefit from the chaos in this region partly because they are no longer governed by Damascus as well as Baghdad, and partly because the "U.S. doesn't trust anyone except the Kurds" [Note 9]. Although the 6.9 million Kurds living in Syria and Iraq have been disunited by different dialects (northern dialect in Syria vs Zaza and south-eastern dialects in Iraq) and political party affiliations (PUK, KDP and PKK), it has always been their common goal to have the "state of Kurdistan" (proposed by Treaty of Sèvres 1920) realized in the 21st century.

The major selling points to the White House for fostering a Kurdistan state (which will definitely become a faithful agent) are not simply to balance out the influence of Damascus and Baghdad but to place the increasingly disobedient Ankara and Riyadh in check and simultaneously insert an ethnical de-stabilizer inside Iran (4.7 million Kurds in Iran and 15 million in Turkey). With Washington's trust and the continuous U.S. reinforcement, it would be just a matter of timing for the Kurds to turn their already de facto independence into a real sovereign state.

The dangerous liaison between the post-Saddam Shi'a Iraqi administration and Tehran is certainly not in the interest of the United States. Strategically speaking, occupation of Mosul by the Islamic State of Iraq and the Levant (ISIL) militias and thereafter, loss of nation-wide control by Baghdad may not be unwelcome by Washington.

As millions of Sunni Iraqis who are now living along Tigris River from Mosul to Takrit and Euphrates River from Anah to Fallujah are already beyond the reach of the Shi'a authority, a better choice to alienate them from the ISIL is self-government. Such a new Sunni Iraq could further trim the Shi'a government's political and economic spheres of influence over the already delimbed Iraq after the Kurds' departure.

A pragmatic reason for the necessary dissolution of Iraq is that the Western mode of democratic system may not function normally in a deeply ethnically- and/or religiously-divided country as voting for the same ethnic or religious group is usually highly binding on each citizen.   The `tyranny of majority' without protection for the minorities is very often the result of a series of elections, however open and fair they may be, over time. The inevitable outcome is non-stop sectarian confrontations and violence, thus feeding the extremists' growth.

Negotiated secession as a political solution

The Obama Administration is co-leading with the Kremlin to help slice the Syria-Iraq area into five or more political states so as to "deconflict" [Note 10] this region and hopefully reduce the attractiveness of ISIL. China, who is eager to see restfulness in this region to facilitate its Silk Road projects, might have made some contribution to the U.S.-Russia deal, bearing in mind that President Obama happened to have several chats with Xi Jinping in Washington three days before his private meeting with Putin in New York on Sep 28.  The Chinese foreign minister's call for political solution to the Syrian crisis on Sep 30 therefore may not be just coincidence [Note 11].  Having garnered the endorsement of Russia and China, such a state formation project is unlikely to be vetoed at the United Nations Security Council meetings.

Down to earth, ascertaining how the Wahhabist Saudi Arabia and Shi'a Iran may participate in this Sunni-Shi'ite tug-of-war is not easy [Note 12] but what is sure is that, so long as the Arabian tribal traditions remain here, the national borders arbitrarily set by the Western powers during the colonial era to contain antagonistic clans inside a tent can do nothing but ignite fire. For long-lasting peace, with reference to the disintegration of Yugoslavia, why not apply the Platonic principle of "mind your own business" to let the various ethnic/religious groups find a habitat of their own to live their local socio-economic, cultural and political lives?

[Note 12]   Business Insider, "Saudi Arabia just replenished Syrian rebels with one of the most effective weapons against the Assad regime", Oct 9, 2015.
Reuters, "Putin reaches out to Saudis", Oct 11, 2015.

[Keith K C Hui is a Chinese University of Hong Kong graduate, a Fellow of The Association of Chartered Certified Accountants (UK), and the author of Helmsman Ruler: China's Pragmatic Version of Plato's Ideal Political Succession System in The Republic, Singapore: Trafford, 2013.]