Trumpism In The Context Of American History; Why Some Union Members Vote Against Their Own Interests

Trump's strategy and campaign is to appeal to majority white, working class voters who have economic anxiety and fear of demographic change. Trump's candidacy viewed in the context of historical continuity - nativism is a primary political discourse in American history. Trump has shown us that it is just as powerful now as in the 1850s or the 1920s. Indeed, "Make America Great Again" recalls the 1920s Ku Klux Klan's appeal for "100% Americanism."

June 16, 2016 Van Gosse; Mark Pazniokas
Printer friendly
Trumpism In The Context Of American History; Why Some Union Members Vote Against Their Own Interests Published June 16, 2016 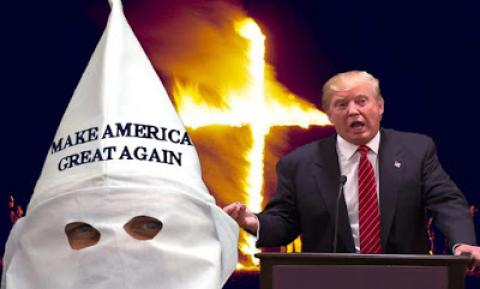 How new is Trump?; to what extent is this master of personal marketing and performance deliberately evoking older traditions of political discourse?, http://www.chaunceydevega.com
Unpacking Trumpism In The Context Of American History
By Van Gosse
June 15, 2016
Huffington Post

Historians don’t seek models. We make comparisons and look for analogies. So don’t expect to find a pattern of Trumpism in American history, as in candidates that sound or act like him. But American historians are certainly asking themselves “How new is Trump?” versus “to what extent is this master of personal marketing and performance deliberately evoking older traditions of political discourse?” Should he seem familiar to us? To answer that question, I’ve rummaged through U.S. history seeking authoritarian demagogues who seek to polarize the populace against foreign “others” and endorse violence, while denouncing all existing structures of partisan power and influence.

There is a habit of lawless contempt for government, mixed up with advocacy of violence, which Trump deliberately stokes — all those references to “knock the crap out of him, folks” and “I’d like to punch him in the face.” In antebellum America, this political style was associated with the rise of Andrew Jackson, who made his fame by dueling, illegally invading foreign territory, and killing anyone who got in his way — so-called “British agents,” state militiamen who questioned his authority, lots and lots of Indians. As early as 1818, Speaker of the House Henry Clay, later the founder of the Whig Party, denounced him for “Caesarism” (what Marxists would later call Bonapartism), meaning the potential for a military dictatorship. But here’s the problem: there’s nothing military about Trump at all, he’s a large soft playboy, reveling in luxury, so any comparison with Jackson’s frontier rough-riding is limited.

A more recent point of reference would be the state of government in the American South from the 1890s to the 1960s: a condition of endemic lawlessness, and pervasive demagogy extolling that lawlessness, in which one section of the population (African Americans) were outside the state with no rights that white men needed to respect. As Gunnar Myrdal wrote in his 1944 classic The American Dilemma:

It is the custom in the South to permit whites to resort to violence and threats of violence against the life, personal security, property and freedom of movement of Negroes. There is a wide variety of behavior, ranging from a mild admonition to murder, which the white man may exercise to control Negroes. While the practice has its origin in the slavery tradition, it continues to flourish because of the laxity and iniquity of the administration of law and justice.... Both the practice of intimidation and violence and the inadequate functioning of justice in the region are expressions of the same spirit of relative lawlessness.... Both are rooted in this strange Southern combination of conservatism and illegality.

Does “a strange combination of conservatism and illegality” sound like Trumpism? It resonates with Trump’s demonization of Mexicans and Muslims, and encouraging his followers to “rough up” opponents. Certainly in the Jim Crow era, the South produced a long list of flamboyant, cartoonish, and truly dangerous leaders, like Mississippi Senator Theodore “The Man” Bilbo and his predecessor, James K. Vardaman, the self-styled “White Chief,” and South Carolina’s “Pitchfork” Ben Tillman, plus many others. But again the comparison is limited because those men were part of a well-organized political party with deep historical roots, the Democratic Party. They and their supporters were all “Yellow Dog Democrats,” as in the apocryphal saying “I’ll vote for a yellow dog before I’ll vote for a Republican.” There was nothing insurgent about them, they built patronage machines and factional networks that lasted for decades, maneuvered at national conventions and negotiated with presidents, and governed, none of which Trump has ever done. Even more importantly, they expressed the needs of a social and economic system premised on the super-exploitation of a disfranchised racial caste, backed up by a permanent paramilitary network, the KKK. That system, “White Supremacy” as they liked to call it, is as close as America has gotten to a kind of democratic fascism. A real estate empire and a reality TV franchise hardly compare to the entire Jim Crow system, even if Trump gives a knowing nod to what white men used to be able to do to their inferiors.

The most surprising aspect of Trump’s candidacy, and its most significant degree of historical continuity, is with nativism as a primary political discourse in American history; many historians, I suspect, have thought of that kind of appeal as a thing of the past. Trump has shown us that it is just as powerful now as in the 1850s or the 1920s. Indeed, “Make America Great Again” recalls the 1920s Ku Klux Klan’s appeal for “100% Americanism.” Remember, that Klan was primarily northern middle-class men, and it was just as anti-Catholic and anti-Semitic as anti-black. It was also very popular in New Jersey, and even New York. The ways in whichDonald Trump evoke its mass appeal should not surprise us since the historical record documents suggest that his father Fred associated with Klan members. A June 1, 1927 New York Times article describes a violent melee between the Klan and what they denounced as New York city’s “Roman Catholic police,” citing Fred Trump’s arrest in Jamaica, Queens. And Donald Trump has been endorsed by the most prominent Klan leader of recent decades, David Duke. But still... Trump wears no hood, and burns no crosses; his supporters do not parade through Arab-American or Mexican-American neighborhoods in full regalia. His appeal is fundamentally personal, and even personalist, and while we should not underestimate the significance of his wreckage of a once-great political party, I fear we overstate the long-term significance of Trump. Put another way, the jury is out on whether there will be any such thing as Trumpism.

[Van Gosse is a historian and author specializing in American political development, the African-American struggle for citizenship and American society in the Cold War era and since. He is author of Where the Boys Are: Cuba, Cold War America, and the Making of a New Left, The Movements of the New Left 1950-1975, and the forthcoming We Are Americans: Black Politics and the Origins of Black Power in Antebellum America. His book Rethinking the New Left: An Interpretative History was named a CHOICE Outstanding Academic Book for 2006 and will be published in translation in the People's Republic of China.
His scholarship covers the social movements of the United States after World War II, the so-called New Left, with a particular focus on the movements "in solidarity" with social change in Latin America, from the Cuban Revolution in the 1950s through the Central American wars of the 1980s. Follow Van Gosse on Twitter: www.twitter.com/vangosse]
Thanks to the author for sending his column to Portside.
A Berkeley Professor Tries to Explain Trump to Labor in Hartford
By Mark Pazniokas
June 15, 2016
The Connecticut Mirror 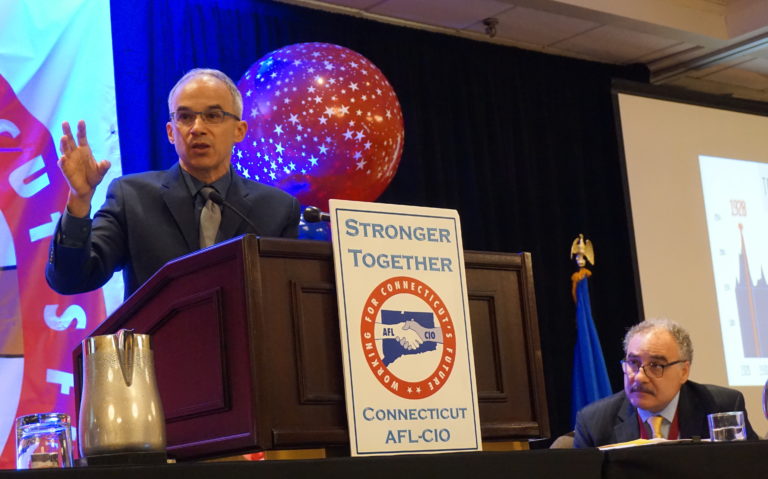 [Mark Pazniokas is Capitol bureau chief for The Connecticut Mirror. He is a former staff writer for The Hartford Courant and Journal Inquirer and a former contributing writer for The New York Times. In 35 years as a reporter, he has covered some of the most compelling political stories in the state. The Washington Post included Mark on its list of best state capitol reporters in the U.S. in 2014. Mark is a graduate of Boston University.]