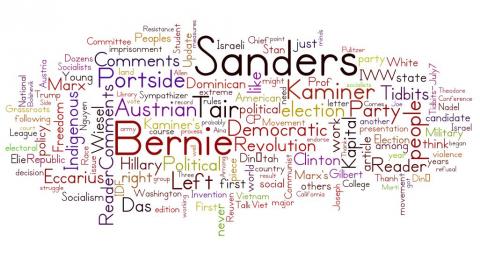 Tidbits - Reader Comments, Resources and Announcements - July 7, 2016, Portside
Resources:
Announcements:
Re: What Bernie Sanders Still Wants
Here is the Low Down on the major differences in the on-going negotiations between Clinton's and Sanders' aides over the final positions in the DNC's Party Platform as reported in Portside.
Larry Aaronson
Posted on Portside's Facebook page
====
While HRC's people wish we would just give up and go away, then vote with them for HRC! I think that is a lot to ask of progressive minded people!
William Proctor
Posted on Portside's Facebook page
Re: When Should Bernie Sanders Endorse Hillary Clinton? Not Yet
Coming from The Nation magazine, the country's oldest consecutively published liberal-left publication. Gives us all something to think about, especially after what happened in Congress today. The action of those who are elected to represent all the people, or at least all Democrats was despicable. Their action was no way to build unity against Trump.
Jay Schaffner
Posted on Portside's Facebook page
==== 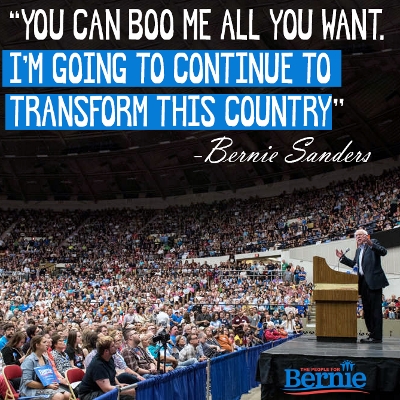 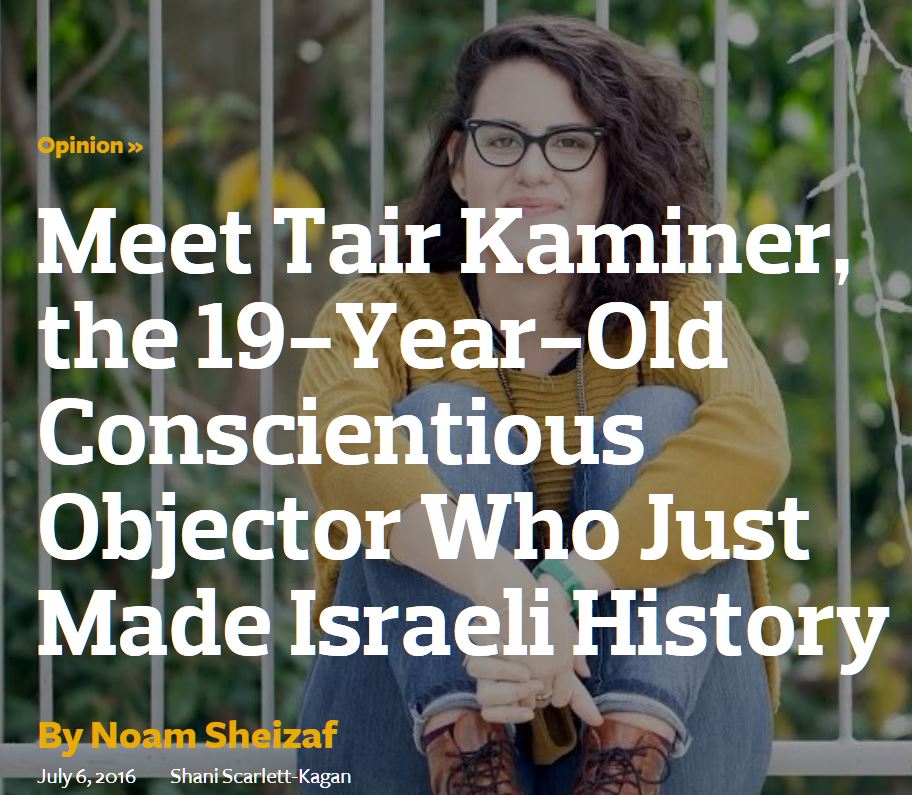 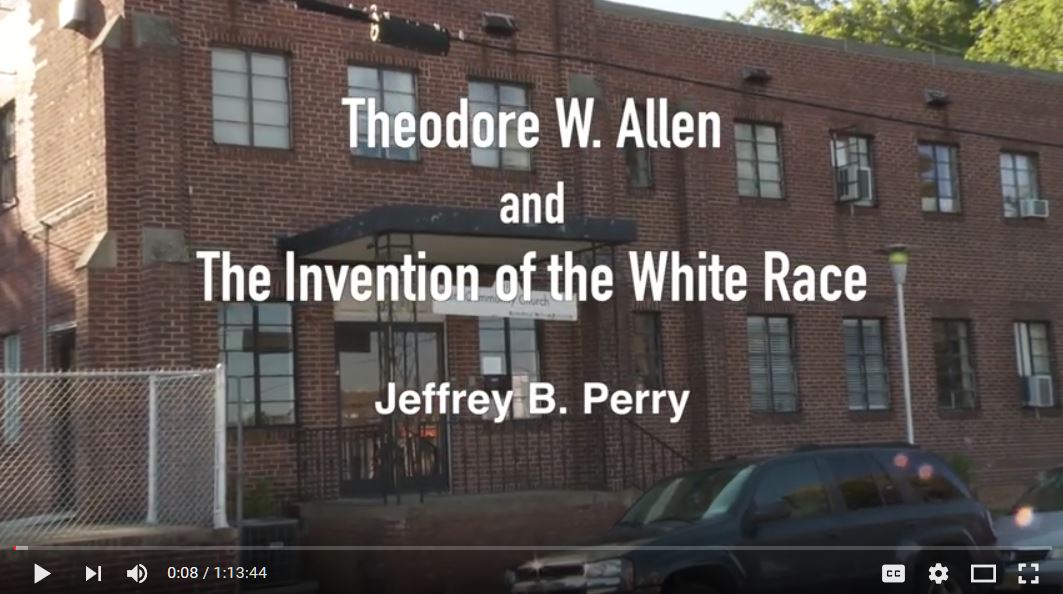 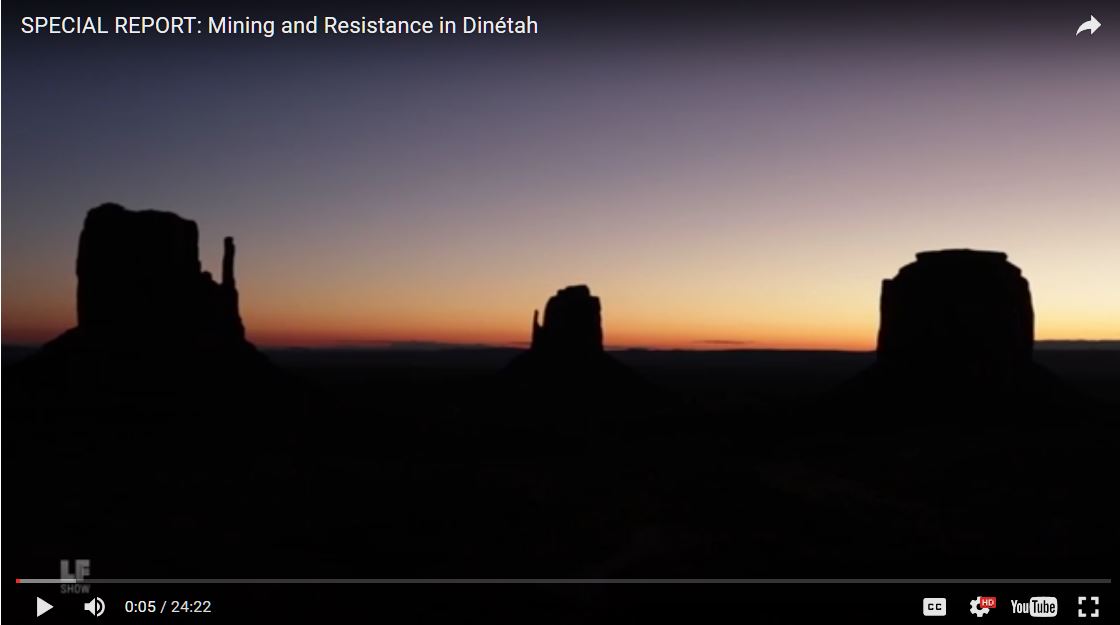 Listen here.
A special episode-length documentary filmed on location in Dinétah; the name of the land of the Navajo people, spanning parts of Arizona, New Mexico, Colorado and Utah. 21 Billion tons of coal, the largest deposit in the US with an estimated value of 100 billion dollars, lay untouched in Dinétah until 1966. In that year, Peabody Coal Company (now Peabody Energy) leased the land in an agreement with a Hopi tribal council they helped to form.
In 1974, Congress passed the Navajo-Hopi Land Settlement Act, commonly known as "the relocation law." It divided about 2 million acres of land previously shared between Diné and Hopi tribes. Nearly overnight, the homes of tens of thousands of Diné and several hundred Hopi were now illegal.
On the anniversary of the founding of the United States, we visit with Diné (Navajo) youth and elders coming together to fight for the survival of their culture, fighting against displacement caused by US government policy, as well as exploitation caused by the mining industry.
For additional information and resources, see the following organizations: To Nizhoni Ani, Black Mesa Indigenous Support, Honor the Earth, Indigenous Environmental Network, Diné C.A.R.E., and Cultural Survival. #PayUpPeabody
http://www.lauraflanders.com/special_report_mining_and_res
The Laura Flanders Show on Twitter
The Laura Flanders Show on Facebook
Laura's F-Word on SoundCloud
The Laura Flanders Show on YouTube
The Laura Flanders Show
Copyright c 2016 The Laura Flanders Show, All rights reserved.
Our mailing address is:
The Laura Flanders Show
#325 Centre for Social Innovation
601 W 26th Street
New York, NY 10001
First edition of Das Kapital sets world auction record 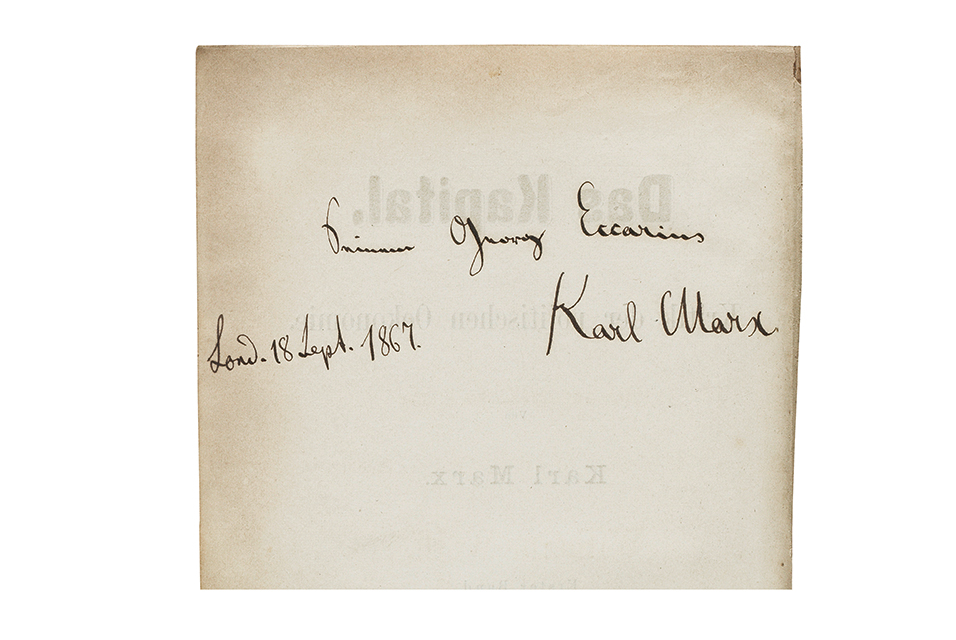 A rare presentation first edition of Karl Marx's seminal work, Das Kapital, sold for o218,500, with an estimate of o80,000-120,000.
Photo: Bonhams.
A rare presentation first edition of Karl Marx's seminal work, Das Kapital, inscribed by the author and given to Johann Eccarius, the close friend with whom he fell out and who may have betrayed him, sold at Bonhams Fine Books and Manuscripts sale in London on June 15 for o218,500. It had been estimated at o80,000-120,000. This is a new world record for a copy of Das Kapital at auction.
Bonhams senior book specialist Simon Roberts said, "This was a very important copy of one of the world's most influential books and not surprisingly the bidding was extremely keen - presentation copies are extremely scarce. I suspect the irony that a devastating criticism of capitalism should sell for such a huge sum would have caused Marx a wry smile".
The copy was signed and dated on 18 September 1867, four days after its publication, and is among the very few presentation copies known to have survived. Das Kapital consists of three volumes but this first part is the only one published during Marx's lifetime. The others, edited by Friedrich Engels from Marx's notes, appeared in 1885 and 1894.
Johann Georg Eccarius (1818-1889) was a German tailor and labour activist who joined the English branch of the League of the Just, a group of German artisans and professionals who had fled from Paris after the failure of the 1839 uprising. In 1846 Marx and Engels, then living in Brussels, were invited to join the League, which was in the process of evolving into the Communist League. The following year they attended its second congress in London when Eccarius and Marx are likely to have met for the first time.
A friendship quickly developed between the two men. Eccarius became one of Marx's strongest supporters. In 1848 he was elected as member of the new three-man Central Committee of the Communist League and year later he co-opted Marx onto the same Committee. Marx, in turn, encouraged Eccarius in his journalistic ambitions and, with great tact, provided financial assistance after his friend lost his tailoring job through illness. At one point Marx even pawned his wife's coat to raise money to help Eccarius when the tailor suffered a bout of consumption. Marx once described Eccarius as one of `my oldest friends and adherents" and chose him as one of the handful of people to be shown extracts from Das Kapital as it neared completion.
In 1864 Eccarius attended the first meeting of the International Workingmen's Association, the First International, and in the year Das Kapital was published, he became the organisation's General Secretary, a position he held until 1871.
Read more here.
From Sanders to the Grassroots: Continuing the Political Revolution Among the Student Left - National Conference - August 5 - 7

Join us for our unique summer gathering of young socialist activists and Bernie Sanders supporters this August 5-7, 2016, just 10 minutes outside of Washington, DC. The conference, "From Sanders to the Grassroots: Continuing the Political Revolution Among the Student Left," will be held at the National 4-H Conference Center, 7100 Connecticut Ave, Chevy Chase, MD 20815.
REGISTER HERE!  (This includes housing, meals, and conference materials)
APPLY FOR A TRAVEL SCHOLARSHIP!
APPLY FOR A CHILDCARE SCHOLARSHIP!
Sponsors

Political Context
Joint Statement by College Students for Bernie and the Young Democratic Socialists
To the surprise of millions, the Democratic presidential primary produced a candidate worthy of your vote. Bernie Sanders, a democratic socialist, had laser focus on economic inequality and political corruption. He was able to connect with the American working class, environmentalists, electoral reform activists, and, of course, students and millennials. He also was open to being pushed by Black Lives Matter unlike other politicians.
The Democratic primary produced exciting and progressive candidates, while the country's social and economic inequalities fostered scary and reactionary politicians in the Republican field. In both primaries, millions of voters rejected establishment candidates, which is a credit to both the Tea Party Movement and Occupy Wall Street. How do we, as progressives and socialists, reclaim the bipartisan anger away from the right-wing into a meaningful transformation of the electoral process, economic system and social fabric?
College Students For Bernie and the Young Democrats Socialists are uniting in Washington, DC, the most politically corrupt city in the nation. Our goal is to strengthen the left and advance towards a more progressive and brighter future. As students across the country watch the primaries end, we need a space to strategize how to promote social and electoral change regardless of who is in the White House. This convergence of like-minded students and youth gives participants the opportunity to mix their ideas, their stances, and learn in-person from one another to continue the Political Revolution in our campuses and communities in the Fall.
More information here.