Half of all new jobs in Washington, DC will require at least a bachelor's degree, although only 12.3 percent of Black residents in 2014 had graduated from college. And, now that wealthier residents have moved back to cities, rent increases have left longtime residents unable to afford their homes. 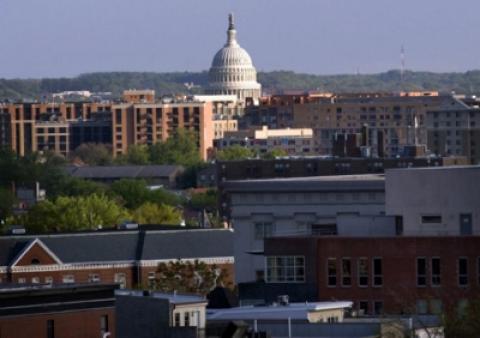 The booming and increasingly dynamic D.C. economy is leaving the city’s longtime black residents behind, according to a study released Thursday that examines African American employment, population and housing trends in the nation’s capital.

The Georgetown University report, which culled data from several recent studies, found that more than half of all new jobs in the District between 2010 and 2020 will require at least a bachelor’s degree, although only 12.3 percent of black residents in 2014 had graduated from college. It noted the average white household in the region has a net worth of $284,000, while the assets of the average black household are just $3,500.

[Net worth of white households in D.C. is 81 times that of black households]

“It’s not a pretty picture,” Council Chairman Phil Mendelson (D) said before the findings were presented to city leaders and residents. 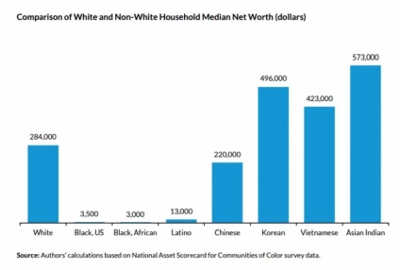 While striking, the findings largely mirror those of other recent studies. As the city becomes wealthier, younger and more affluent residents are moving in, raising housing prices and pushing longtime black residents out of the city. In 2015, the population of black residents in the District — which garnered the nickname “Chocolate City” — dipped below 50 percent for the first time in 60 years.

The Georgetown report traces the inequities in the District today to discriminatory practices that once kept black residents out of the economy. It also provides recommendations for the city to help strive for greater equality.

“One of the contributions of this report is how much it puts in one place both the history of the city and redlining and school segregation, and connecting it to how those impacts play out today,” said Ed Lazere, executive director of the D.C. Fiscal Policy Institute, whose work is extensively cited in the study. “That half of all black households in D.C. have assets of $3,500 or less — that’s virtually nothing, and it’s probably a reflection that housing discrimination years ago kept them from owning homes.”

The report indicates that one of many reasons black Washingtonians are being left behind is that after the devastating 1968 riots, many businesses opted to move to the suburbs. It also notes that black residents were often “redlined,” the practice of banks and loaning institutions refusing to lend to business owners in communities with large minority populations.

“Aspiring black businesspeople were unable to fill the vacuum simply because they could not secure a line of credit to open and maintain small businesses, stores, dry cleaners, restaurants and other outlets,” the report states.

The report recommends that the D.C. Chamber of Commerce and city agencies create a database of minority businesses that would “outline opportunities and procedures for small-business loans and training aids.” Local universities, the report says, should offer courses in the “how-tos of minority business development.”

Maurice Jackson, a Georgetown history professor and chairman of the city’s Commission on African American Affairs, stressed the need to invest in education and training programs so D.C. residents have the skills needed to meet modern job demands. Jackson, the report’s lead author, also suggested that the city invest in apprenticeship and job programs for residents returning to society after serving jail time.

Council member Vincent C. Gray (D-Ward 7) said that as mayor, he invested in vocational and career programs in high schools that focused on IT, hospitality and other trades.

The report also traces the history and effects of gentrification, noting that it has led to a dearth of affordable housing. There are 43,000 D.C. residents who qualify as “extremely low-income,” which means a family of four making less than $32,000 a year. (Ninety-one percent of “extremely low-income” families are African American.)

Beginning in the 1950s, wealthy and middle-income families started fleeing cities, including the District, for suburbs and largely left poor people by themselves in city centers.

“This suburbanization led to economic downturn within several major cities, such as Atlanta, Chicago and Washington, creating fiscal crises due to shrinking tax bases,” according to the report. “To alleviate this problem, many city governments pursued policies to attract new investments in the city, bring in wealthier residents to increase taxable income and housing sales, revitalize retail activity and raise sales tax revenue.”

“In these communities, policies should offer a path to eventual homeownership, enabling individuals to eventually purchase a unit at an affordable price,” the report states. “Rent-to-own housing is beneficial because it creates personal equity for individuals and helps lift residents from poverty.”