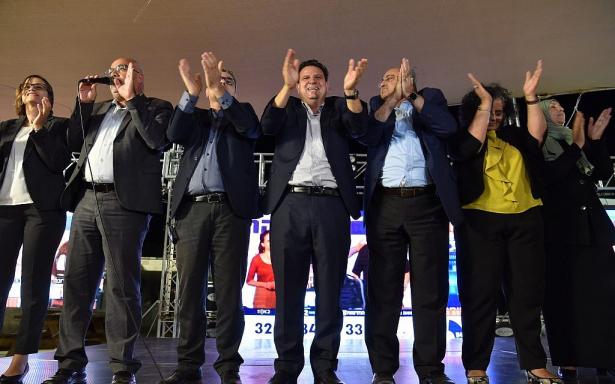 Heads of the Joint List party react as the first results in the Israeli Knesset elections are announced, September 17, 2019,Photo by: Gil Eliyahu-JINIPIX

A labor federation representing over 30 million workers from 152 countries is calling on unions around the world to join—or do everything they can to support—the millions of people set to take to the streets on Sept. 20 for the youth-led global climate strikes.

Exit polls show the Joint List winning up to 15 seats in the Knesset, which leaders see as a chance to 'send that inciter Netanyahu home'.

Women around the world are taking to the streets. What do these new feminist movements have in common—and how might they join forces?

As the biggest strike for more than a decade has shown, the French president has picked a fight with the entire working population.

A talk with Avery Ng,  chairperson of Hong Kong’s League of Social Democrats (LSD), which occupies "the furthest left position in the democracy movement."

Norway’s Labor Party took a hit in this week’s elections. But the radical left surged — showing that socialist politics are still alive in the Nordic country.

Maxciel Pereira dos Santos, a veteran defender of Brazil’s indigenous people, has reportedly been shot dead in a remote Amazon town. His union stated that Santos was murdered in retaliation for his work at the Vale do Javari Reservation where he protected indigenous people from the “illegal invasions” by hunters, miners, loggers, and others.

The NDP's electoral program makes no serious effort to put forward a radical vision of a Green New Deal for which public action in favour of climate justice and a massive public green jobs campaign would be its foundation.