Ousting Trump from the White House is not sufficient to address the deep-going crises that today threaten the rights and well-being of people in the U.S., the very lives of millions across the globe, and the natural environment... 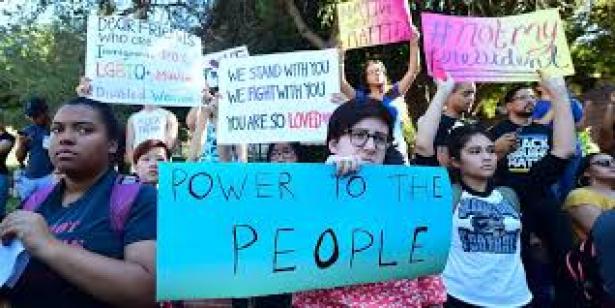 We’re less than a month into the new year. A Trump-ordered illegal assassination brought the U.S.to the brink of another full-scale war in the Middle East, averted only because the Iranian regime showed remarkable restraint. One of the world’s seven continents recently went up in flames with average temperatures in several of Australia’s largest cities topping 104 degrees. The New York Times just ran another op-ed column comparing the 2020 election to the build-up to the Civil War, making no new points but underscoring the now-widespread recognition that racism and demographic change are once again at the center of a powder keg polarization in U.S. society.

So it is a good moment to step back, survey the terrain, the balance of forces and what’s at stake; and set our overall goals and plan for the ugly year ahead. In my view, that kind of stock-taking leads to strategies for action based on two over-riding mandates.

First, it is absolutely essential to defeat Trump and as many of his GOP enablers as possible at the federal, state and local level in November.

Second, ousting Trump from the White House is not sufficient to address the deep-going crises that today threaten the rights and well-being of people in the U.S., the very lives of millions across the globe, and the natural environment that sustains modern human life.

Trumpism hardly comes out of the blue. It builds on 40-plus years of right-wing backlash and longstanding racist currents in U.S. society. But it combines these into an overall package unprecedented since the McCarthy period and arguably since before the Civil War. Trump and his enablers are dead set on one-party permanent political rule via a racialized authoritarian state.

The top strategists of Trumpism know their all-wealth-to-the-wealthy economic program and their climate change denialism are increasingly unpopular. They are well aware that demographic change—the rising proportion of people of color in the U.S. population—is are not working in their favor. They fear that even the already-rigged structure that gives disproportionate power in the Senate and Electoral College to small, mostly white states, plus voter suppression and gerrymandering, will not be enough to keep them in power. So they see an authoritarian state whose mass support is built on a promise to preserve “white Christian America” as necessary to implement their full program of fossil fuel-driven, no-limits capitalism and a militarized ‘America First’ global hegemony.

Even a brief sampling of administration and GOP steps taken or reported just in the last month indicates how relentlessly the Trumpists are driving toward this goal:

All this as the Party-of-Trump-Being-Above-the-Law spews a blizzard of lies in the Senate’s impeachment cover-up trial while a speaker at the Trump-backed Virginia armed “gun rights” rally made his leaders’ bottom-line platform of racial and imperial revenge crystal clear: “The Democrats want to make us like Baltimore, Detroit, Venezuela, Chicago!”

OPPOSITION ACROSS THE BOARD

The good news is that most of the country is opposed to this poisonous brew. And along with—and pressed by—this majority, every Democratic presidential candidate and almost every Democratic candidate for a House or Senate seat is also present in the anti-Trump camp.

Yes, there are vacillations and qualifications. Many want to change the subject when some of the hottest-button issues come up. Few make the necessary connection between Trumpism and underlying features of U.S. society. But there’s a reason Trump retweeted a photo-shopped image of top congressional Democrats leaders in traditional Muslim attire in front of the Iranian flag on January 13. He and his camp are laser-focused on the central axis of struggle and who is on what side. They remind their base of this every day, driving home the administration/GOP/Fox News message that dark-skinned, non-Christian “others” are out to destroy white Christian America and the “Democrat Party” is the vehicle for the country’s destruction.

This is not the polarization social justice activists would like to see. But in a country where we are not (yet) strong enough to set the terms of political conflict, it is the polarization we must deal with. And given this, the stakes in the 2020 election are both immense and clear-cut:

A second Trump term means racist authoritarianism strengthened, emboldened and unleashed. It means a drastic narrowing of the democratic space progressives and the left have utilized to resist up to now, new levels of hardship for the most vulnerable among us, and qualitatively heightened danger of climate change-driven catastrophe. The pattern is well-established: when would-be strongmen win re-election, the erosion of democracy and level of repression accelerates.

In contrast, a defeat of Trump by even the most moderate of Democrats throws the far right backwards. It translates at a minimum into preservation of democratic space and a very different terrain on which to fight than we have had to traverse the last three years. It opens the door to something a Trump victory would preclude: the possibility of the “new American majority” going beyond playing defense and starting a new progressive cycle.

These are the alternatives which define the next year. They are the reason for the first of the two mandates presented above. The alarm is sounding and there are no sidelines to sit on in real-world politics. Whether your ear is most sensitive to concentration camps at the border, a President denying climate change at the end of hottest decade on record, an Attorney General pushing Onward Christian Soldiers or some other indication that MAGA means catastrophe, the siren is wailing. This is not a drill.

Next week’s installment of this column will focus on the second mandate for 2020 action, why beating Trump is not a sufficient goal for 2020 and what this means for the role of the left.