Two-hundred thirty-six current and former staffers for Mayor de Blasio signed an open letter calling on him to live up to the promises of reform that initially drew them to work for him. One demand is to cut the $6 billion police budget by 1/6. 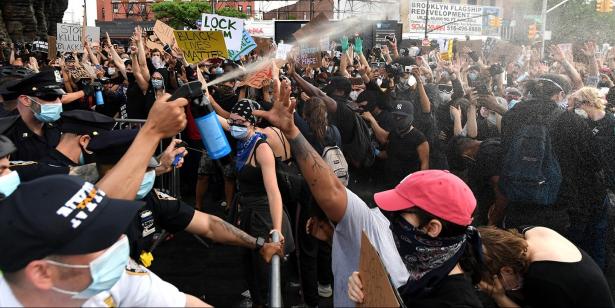 NYPD officers spray Mace into the crowd of protesters gathered at Barclays Center to protest the recent murder of George Floyd on May 29, 2020, in Brooklyn, New York.,Photo: Kevin Mazur/Getty Images // The Intercept

We are former and current de Blasio Administration staffers.

We came to the Mayor’s Office from different places and walks of life, but we all shared a common goal: to work for a fairer, more just New York City.

None of us joined the de Blasio Administration believing this mayor would be radical on criminal justice policy. That was apparent from the moment he hired Bill Bratton to be his police commissioner. But we saw in Bill de Blasio a chance for real change.

He made his opposition to “Stop and Frisk” a pillar of his run for the mayoralty. He spoke passionately about his duty as a parent to make New York City safer for his Black son and daughter. He called for cuts to the City’s jail population, and for the closure of Rikers Island.

It was our hope that these words were a starting place. That we could push the Administration further to reform New York City’s racist criminal legal system. That together we could create real, lasting change for a City and police department that have failed Black and brown New Yorkers, generation after generation.

Our time in the Mayor’s Office showed us that the change we had hoped for, and fought for, might never come.

We saw up close the Administration’s unwillingness to challenge the abuses of the NYPD—the Mayor’s refusal to fire Daniel Pantaleo for choking the life out of Eric Garner, the continuation of the failed “Broken Windows” policing strategy that criminalizes our Black and brown communities, the rejection of even basic accountability measures like making information public about police officers accused of misconduct.

We saw how, while crime rates are at record lows, the Administration has continued to pour money into the NYPD budget—which is now almost $1 billion larger than when de Blasio took office—heightening the over-policing of Black and brown communities.

We saw how the Mayor refused to end the use of solitary confinement, which took the lives of New Yorkers like Kalief Browder and Layleen Polanco, in the City’s jails.

We saw the aggressive push for the construction of new borough-based jails, at a cost of $9 billion, despite activists’ cries to invest that money in jobs and alternatives to incarceration.

The chasm between Mayor de Blasio’s promise to reform the criminal legal system and the actions of his Administration has only widened in the past year.

De Blasio expanded the City’s cooperation with Immigration and Customs Enforcement, which wages war on our immigrant communities.

He joined with police and prosecutors as they demonized the progressive bail and discovery reforms that activists and advocates spent years lobbying for in Albany.

He sat by as thousands of our fellow New Yorkers remained locked in cages on Rikers Island, while a deadly virus raged inside its jails.

And these past long days, as New Yorkers have taken to the streets demanding an end to the racist policing that humiliates, maims, and kills Black New Yorkers, he stood with the very police who perpetrate that violence.

Many of us marched at these protests. We’ve all seen the images and read the stories. Crowds of cops swarming over a single protestor, raining down blows with their batons. Protestors rammed with police cars. A rampaging cop throwing a protester to the curb, sending her to the hospital with seizures. A cop drawing his gun and pointing it into a crowd. A cop macing a defenseless young man with his hands in the air. Cops covering their badges so they could act with utter impunity.

What was the Mayor’s response? He said that the NYPD had “acted appropriately.” That police had “shown a lot of restraint.” That he “was not going to blame” officers who were trying to deal with an “impossible situation.”

And while the Mayor did attempt to walk back some of his comments on Sunday morning, by Tuesday he had implemented an 8:00 PM citywide curfew, an unprecedented attempt to silence New Yorkers’ cries for justice.

We have joined together in writing this letter because we could not remain silent while the Administration we served allows the NYPD to turn our City into an occupied territory. Our former boss might not hear the cries for justice from Black and brown New Yorkers, but we do.

We are demanding radical change from the Mayor, who is on the brink of losing all legitimacy in the eyes of New Yorkers.

1. Reduce the NYPD operating budget by $1 billion in Fiscal Year 2021, and reallocate that money to essential social services, including housing support and rental relief, food assistance, and health care, in alignment with the demands of the NYC Budget Justice campaign.

2. Immediately fire all NYPD officers found to have used excessive force—or to have covered their badges—at protests.

3. Release the names and official disciplinary records of all NYPD personnel who have been accused of using excessive force, covering their badge numbers, or other misconduct.

4. Appoint an independent commission, in the vein of the Knapp and Mollen Commissions, composed of civil rights attorneys, journalists, and activists, including abolitionist organizers, to investigate the response of the Mayor’s Office and the NYPD to the May and June 2020 protests against police violence.

We are also calling upon all former and current staffers of conscience to stand with us in our call for change.

We all chose to serve for a better New York. Stand with us now and demand justice—for George Floyd, Breonna Taylor, Tony McDade, and Ahmaud Arbery. For Eric and Erica Garner. And for all Black and brown New Yorkers.

[Shant Shahrigian covers politics for the Daily News. He was previously an assistant city editor for the paper, and has also worked for outlets from the hyperlocal Riverdale Press to Germany’s international broadcaster, Deutsche Welle.]