Some labor historians say this new militancy resembles the 1930s, when a huge strike wave helped lead to landmark pro-labor legislation and one of the biggest bursts of unionization in American history. 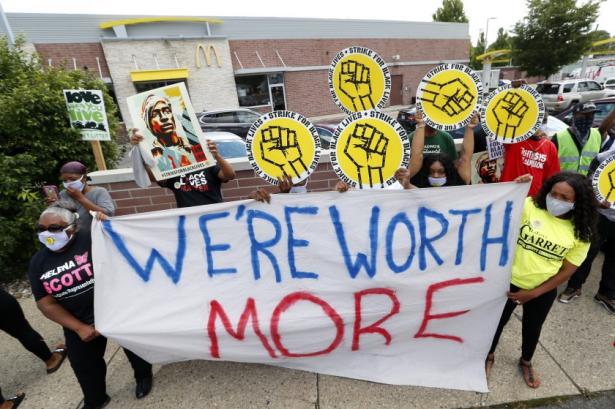 Workers at a rally outside a McDonald’s in Detroit on July 20, the day when workers staged demonstrations around the country to protest economic inequality and systemic racism.,Associated Press

In recent decades, we have rarely seen so much worker anger and so many strikes as we’ve seen since COVID-19 hit America. Fears of the virus have greatly emboldened American workers.

McDonald’s workers walked out in Los Angeles, San Jose and Oakland to protest a lack of personal protective equipment, while hundreds of farm workers in Washington state went on strike to demand safer conditions and $2 more an hour in hazard pay.

In New York, Chicago and Shakopee, Minn., Amazon employees walked out to demand that the company do more to protect them against the coronavirus. Instacart workers in numerous cities went on strike to demand an extra $5 per order and protective items like masks and sanitizer.

Last week, tens of thousands of workers went on strike across the nation in support of Black Lives Matter, demanding racial and economic justice. Teachers in Texas and other states are threatening to strike (or stay home) if they’re ordered to report to schools they feel are unsafe.

Some labor historians say this new militancy resembles the 1930s, when a huge strike wave helped lead to landmark pro-labor legislation and one of the biggest bursts of unionization in American history. Now many workers are hoping — and many employers are dreading — that the pandemic-induced wave of militancy could produce a similar surge of unionization.

Support for unions is rising. Sixty-four percent of Americans approve of unions, nearly the highest level in 50 years. An MIT study found that 50% of non-union, non-managerial workers say they would vote to join a union. One reason for this trend is that many unions have worked to build public support, as when striking L.A. teachers demanded not just pay raises, but smaller class sizes and more nurses, librarians and school counselors.

Another promising sign is the changing generational support for labor. Americans age 18 to 34 are the age group most enthusiastic about unions. They were badly scarred by the Great Recession, they’ve grown up in an era of huge income inequality, and many have been inspired by Vermont Sen. Bernie Sanders. Indeed, many young Americans have been flocking into unions, including graduate students, cannabis workers, digital journalists, museum workers and workers at nonprofits.

But forming a union remains extraordinarily hard for most workers — the main obstacle being fierce employer resistance. One study found that nearly 1 in 5 workers who lead unionization efforts gets fired.

In early July, Augie’s Coffee, with five shops in Claremont, Redlands and Riverside, laid off all 54 of its baristas a week after workers announced a unionization drive. The baristas called it retaliation, but Augie’s blamed a pandemic-related drop in business. When Trader Joe’s workers began complaining about job safety and COVID-19 this spring, its chief executive sent an anti-union letter to all employees. In a study of companies’ anti-union tactics, Kate Bronfenbrenner of Cornell found that 57% threatened to close operations if workers voted to unionize and 34% fired union supporters.

Employer resistance goes a long way to explaining why only 10.3% of American workers are in unions, and just 6.2% in the private sector, but there are also other factors, such as the decline in factory jobs and unions’ corruption scandals. Numerous laws, judicial rulings and agency decisions also make it hard to unionize.

The pandemic has made unionizing harder, but there have been some recent successes, for example, among hotel workers. And in results announced Monday, tens of thousands of childcare providers in California voted to unionize.

Still, barring a tidal wave of worker anger that swamps corporate resistance, it will be extremely hard for unions to meet their goal of organizing millions more workers, unless there are major changes in labor law. Joe Biden’s platform includes many far-reaching proposals to boost unionization, among them, ensuring union recognition through majority sign-up and giving all public-sector employees a right to unionize. But they could be blocked by filibusters, which Senate Republicans have often used to torpedo pro-union proposals.

With unions in the U.S. so weak, many are saying we should borrow some ideas from Europe to give workers greater say and power. In Germany, blue-collar and white-collar employees elect representatives to “works councils,” which meet with management to discuss matters like work schedules and health and safety. In Denmark, Germany and several other countries, the law calls for workers to elect representatives to corporate boards, often giving them one-third of the seats.

With so few private-sector workers in unions, many labor leaders and advocates want the government to permit sectoral bargaining in which all workers in an industry, such as fast food or nursing homes, would bargain together (perhaps statewide or nationwide) for better pay and conditions. Congress would have to approve such a law. Another idea to increase worker power is for states to enact laws establishing wage boards — governor-appointed boards that would decide, for instance, what the minimum pay should be for all, say, big-box workers in a state. Such boards could create different minimum wages for specific industries. In New York, a wage board recommended a $15 minimum wage for fast-food workers.

The pandemic has thrown into stark relief the desperation of many essential workers and the callousness of powerful employers toward their safety and welfare. We may look back on this calamitous year as a pivotal moment when unions regained support as being critically important to building a fairer economy and society.

Steven Greenhouse is the author of “Beaten Down, Worked Up: The Past, Present, and Future of American Labor.”