Far Right Militias Are Recruiting Vets: We Must Organize Against This Trend

The war machine conditions vets to embrace white supremacy. In order for soldiers to kill, racist indoctrination needs to be part of the training. 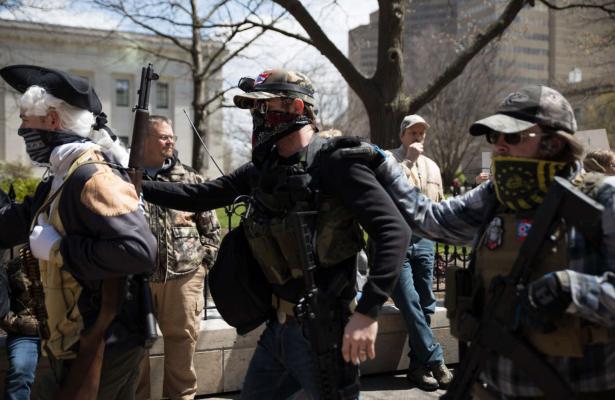 A local militia walks to the Ohio State House in Columbus, Ohio, on April 18, 2020, to protest the state's order to stay home to limit the spread of COVID-19.,Megan Jelinger/AFP via Getty Images

After nearly four years of Donald Trump, far right and white supremacist forces are emboldened in the United States. As a war veteran, I know very well that veterans are far from immune to this problem — in fact, the war machine conditions vets to embrace white supremacy. Meanwhile, the military carries out racist practices of recruitment, targets working-class communities of color and carries out inherently racist wars abroad, feeding the connection further.

Killing another human being is the most unnatural thing a person can do, which is why the U.S. government has spent so much time and energy researching ways soldiers can overcome their instinct to avoid killing. In order for soldiers to kill, racist indoctrination needs to be part of the training. The otherization of the enemy that happens through military training is how many soldiers ultimately come to squeeze the trigger on combatants and innocent civilians. Most people can’t kill another human unless they feel they have some sort of moral imperative for doing so. Racism is one of the ways the U.S. military compels soldiers to kill — by declaring their targets to be less than human.

I saw it myself when I was in the military. The people of Afghanistan were never referred to as Afghans. They were only mentioned in the most derogatory terms. We never discussed Afghans in a positive light. We focused only on the extreme and violent acts committed by a microscopic percentage of the Afghan population. Of course, there was zero acknowledgment of the exponentially larger atrocities the U.S. military has committed throughout American history. The results of this training have been devastating.

This summer, the Military Times conducted a poll among active-duty soldiers. Soldiers identified white nationalism as a “national security threat on par with al-Qaida and the Islamic State Group, and more worrisome than the danger posed by North Korea, Afghanistan or Iraq.” This same Military Times poll reported that 57 percent of troops of color have personally experienced some form of racist or white supremacist behavior; and that one-third of all active-duty soldiers see signs of white supremacist or racist ideology in the ranks.

Vets returning home from deployments, oftentimes to dire employment situations, now only made worse by the COVID pandemic, are primed to be manipulated by far right hate groups and militias. We are seeing this play out. The numbers are disturbing. Veterans make up 25 percent of all militia members in the U.S., according to a recent report from The New York Times.

The Oath Keepers is one of the largest far right anti-government organizations in the country, with tens of thousands of members according to the Southern Poverty Law Center. The Oath Keepers see vets as critical to their organization as they actively prepare for Civil War.

In order for soldiers to kill, racist indoctrination needs to be part of the training.

And when we talk about far right paramilitary groups that vets are drawn to, police departments are the largest among them. Police departments, evidenced by their overwhelming support for Trump and their disproportionate targeting of Black and Brown people, reinforce the racist indoctrination these vets were exposed to in the military.

Research done by the Bureau of Labor Statistics suggests that there are twice as many police and prison guards as there are auto workers in the U.S. Seven percent of the population are veterans; yet vets make up 19 percent of all police. This reality makes the decision to sign up for the police force an all too convenient option for returning vets.

However, active-duty troops and veterans are not a homogeneous body. Some of the fiercest anti-racists I know are veterans. Thousands of them participate in groups like Veterans for Peace and About Face: Veterans Against the War. Many sign up to fight with noble intentions. They believe they are defending freedom and democracy. They, too, are victims of the U.S. war machine and propaganda. Many become disillusioned by the day-to-day reality of the military, and they return home ready to share their experiences and fight systematic oppression. And there are hundreds of thousands of Black and Brown active-duty soldiers and vets.

The left should embrace vets willing to renounce their training. Veterans can be incredibly effective in the fight against white supremacy, not only because they have proven that they are willing to sacrifice for a cause greater than themselves, but also because they have an understanding of how deep and sophisticated the white supremacist project runs in this country, not only domestically but also abroad.

The Oath Keepers see vets as critical to their organization as they actively prepare for Civil War.

The problem lies in ignoring the increasing minority of vets who gravitate toward white supremacist groups.

Radical policy changes need to be enacted if we hope to push back on the growth of white supremacy among vets. Challenging U.S. imperialism and combating white supremacy are part of the same struggle. We challenge U.S. imperialism by providing alternatives for high-school age students who see the military as their only option after graduation. We fight for the development of programs like the Green New Deal, which would provide jobs for thousands of returning vets currently stationed in one of the 800 military bases around the world. We organize for student debt abolition and free education. Too many high-school age students sign up for the military because they can’t afford college. And we work to defund and abolish the police and prison-industrial complex — agents of white supremacy that suck in veterans as both employees and prisoners.

The far right and the influence it has over some vets will not go away under a Biden administration. Racism thrives in desperate economic situations, and our profit-based system, enthusiastically endorsed by Biden, is incapable of solving the economic crisis now facing this country. Organized and widespread pressure needs to be imposed on the next administration if we ever hope to see real change. If we fail to come together on these issues over the next four years, the stage will be set for someone even more dangerous than Trump in 2024. Such a person will undoubtedly mobilize sympathetic, military-trained followers.

Rory Fanning walked across the United States for the Pat Tillman Foundation in 2008–2009, following two deployments to Afghanistan with the 2nd Army Ranger Battalion. He is the author of Worth Fighting For: An Army Ranger’s Journey Out of the Military and Across America, and co-author with Craig Hodges of Long Shot: The Triumphs and Struggles of an NBA Freedom Fighter. He regularly speaks at high schools and universities about his walk across the U.S. and his experience as a war resister. Follow him on Twitter: @RTFanning.