A week of furious street battles, and rethinking feminism, decolonialism and indigenous rights 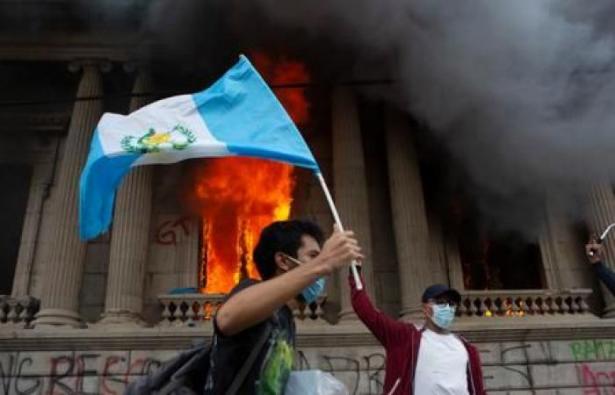 A protester waves a national flag as a part of the Guatemalan Congress building burns in the background. Credit, AP: Oliver De Ros

Hundreds of thousands of people have taken to the streets in Guatemala against the corruption of the political elites. A leader and founder of the Committee for Peasant Unity, an Indigenous and peasant organization, gives details.

In the November 3 general election, progressives in Puerto Rico dealt a serious blow to the two-party system. The PNP-PPD’s combined vote total plummeted, the PIP and a new left party attracted broad support, and neoliberalism was put on notice.

"To organize a Marxist-Feminist Congress, and to reflect our modes of cooperation and conflict within it, is a means to translate our resistance into the development of a continuous Marxist-Feminist movement."

Masses 多数派 is a platform for a group of anti-capitalist, anti-imperial, and anti-patriarchal youth, focused on the exchange of ideas in social movements and civil society. The editors speak to Blizzard (pseudonym), a volunteer at a left media outlet (unspecified due to security concerns) in mainland China.

Under the banner of “For Life, Peace, Democracy and Negotiation of an Emergency Plan”, workers, peasants, teachers, students, doctors, women, Indigenous and Afro-descendant communities as well as the members of left-wing political parties took to the streets across the country.

The journal Nouveaux Cahiers du Socialisme revisits the Quebec national question in light of the mounting struggle against climate catastrophe, the growth of Indigenous resistance, and the crisis of Quebec’s national movement.

The passing of the Greens-initiated motion for a Green New Deal in Victoria in the Legislative Council, is the first time that an Australian parliament has supported a plan to create jobs and address urgent social needs while responding to the climate emergency.