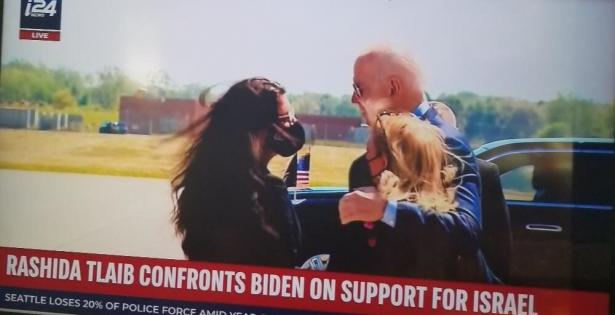 Rashida Tlaib confronts Joe Biden over the Gaza assault at the Detroit airport in a scene that gained iconic significance in Israel. May 18, 2021,Photo of I24 News, an Israeli channel // Mondoweiss

So much is clear from a number of events. The recent Israeli onslaught on Gaza ended after 11 days and not 51 or 22, because Joe Biden told Netanyahu to stop. And that was because Rashida Tlaib told Biden to make it stop. For once there was political pressure on the White House from the Israel-critical lobby.

Now Netanyahu is gone and Israel’s new prime minister is to the right of Netanyahu on the West Bank, but it doesn’t matter. Naftali Bennett won’t dare to go too far, whatever that means.

Yes– what does it mean to go too far? For the first time this is the discussion taking place inside the Democratic Party. What is our line going to be?

Boycott, Divestment and Sanctions, or BDS, is plainly a burgeoning movement inside the Democratic base. Seven leftwing candidates for New York City Council seats endorse BDS (Jewish Insider reports). While rightwing Republicans are leading the opposition to BDS because they see it as a wedge issue to divide Democrats.

Liberal Zionists respect (and fear) the Democratic base. Last week Americans for Peace Now came out for conditioning American aid to Israel over its “human rights violations,” including bombing Gaza and killing 67 children — and APN bragged that it was the first liberal Zionist group to make the call.

Even more significantly, Randi Weingarten, the American Federation of Teachers leader and a stalwart at J Street, is cracking. Some AFT locals have voted in support of BDS and when old guard Israel lobbyist Jonathan Greenblatt of the ADL expressed alarm, Weingarten wrote him a letter refusing to come down on them. Weingarten said that while her union doesn’t support BDS, it supports “dialogue, debate and the free ability to express a range of viewpoints” and “the national union does not override locals over differences or questions of policy” (per the Jewish Journal).

It can’t be long before IfNotNow endorses BDS as the only answer to apartheid, and J Street moves left with Americans for Peace Now.

In a call last week Nadav Tamir of J Street said that as far as Israelis are concerned, the Squad runs the Democratic Party.

Most Israelis think we have a very progressive Democratic party that is pushing Biden in the wrong direction and he is holding. They tend to see Sanders and the Squad as the whole Democratic party. Any mention of restricting aid is very frightening.

Israelis are keenly sensitive to American politics. Arguably this is how Naftali Bennett became prime minister. Israeli leadership sees the Biden Democratic Party leaving the reservation and it wants to preserve Israel as a bipartisan issue. The Israeli government knows it has to tone things down. Right, left and center agree on that.

Liberal Zionists are hopeful that the non-Netanyahu government will keep Israel support bipartisan in the U.S. Bennett will do nothing to provoke the United States in the West Bank. Differences between the two countries will be handled privately. It’s in both Biden and Bennett’s interest not to go back to the rancor of the Obama-Netanyahu relationship.

So the Iran deal will slide back into place without a lot of angry opposition from Israel.

Again, though, this is because of Israel’s waning power in the United States. Netanyahu was able to dictate policy to the Democratic Party thanks to the Israel lobby. No more. The days when Haim Saban would script Hillary Clinton on BDS are over. The days when the lobby could knock off Israel critics are over. Every single one of the 25 cosponsors of Rep. Betty McCollum’s 2019 legislation to restrict aid in defense of Palestinian children were reelected in 2020, Rashid Khalidi said in an appearance with the Arab American Institute last week. “The Squad has become a Battalion,” James Zogby said.

The two factors on our side are the rise of the progressive left and the defections in the U.S. Jewish community. No matter how private Biden and Bennett try to keep their differences, these forces will continue to assert themselves. Republicans will continue to drive the wedge in the Democratic Party.

You cannot sell Israel to American progressives. In Le Monde, the sociologist Eva Illouz writes that Israel is “considerably weakened.” It has lost its sense of purpose and entered a “profound moral crisis” and American Jews are abandoning it.

[E]merging from Netanyahu’s long reign, Israel is considerably weakened. The Diaspora and the American Democratic Party, which have always been its mainstay, are pulling away and a perhaps irreparable split within the Jewish people is occurring.

The legitimacy crisis won’t end: Democratic Party values and Israeli values are incompatible. The most revealing comment I heard during the recent Israeli election season was Barak Ravid’s analysis that the reason Bennett could include the Palestinian party Ra’am in his governing coalition was that 130,000 Israelis went to Dubai for Hanukkah vacation under the normalization deal with the UAE and got to see Arabs as real people.

What more do you need to know about the illegitimacy of a society built on the ruins of Arab villages? Where Arabic is a second-class language under the law? That leading human rights groups describe as an apartheid state?

I’m hopeful about the inclusion of Ra’am: that it will lead to full equal rights for Palestinians in Israel and Palestine. But that will only happen with continued American pressure.

Democratic progressives have the opportunity to push BDS, and they will do it. And they will change the power map of the conflict forever.

[Philip Weiss is Founder and Senior Editor of Mondoweiss.]