I would be failing future generations if I did not to write about who owns the narrative of our country’s evolution. It is difficult to have productive discourse about liberty and justice in this country if we don’t first have command of basic truths 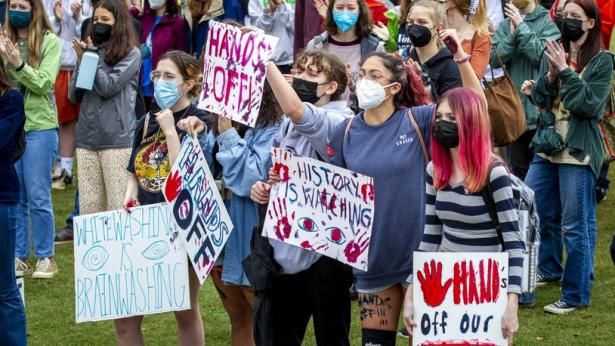 In February, students from metro Atlanta gathered at Liberty Plaza near the Capitol to protest a bill backed by Republican lawmakers that would limit how race can be discussed in classrooms., Credit: Steve Schaefer/Atlanta Journal-Constitution

As Georgia students gathered at the Capitol last Friday to protest legislation that would govern the way race is taught in schools, an interesting email hit my inbox.

The writer, whose identity I will conceal, was responding to one of my past columns on wealth gaps. I won’t repeat his vitriol, but in summary, he suggested Black Americans were alone in their quest for civil rights.

Asian Americans, Native people and Jewish people are not “protesting that they are owed reparations” or “saying they’ve been oppressed or offended by statues,” he wrote.

None of that is true.

All the groups he mentioned have demanded reparations. All have said they were oppressed. All have been offended by certain statues. For those who did not learn this in school, innumerable resources exist to enhance their knowledge.

Normally I wouldn’t waste keystrokes writing about these emails, but after seeing students outside the Capitol, I felt as if I would be failing future generations if I did not to write (again) about who owns the narrative of our country’s evolution.

The misinformed individual who wrote that email is an example of what can happen if state legislators pass a bill that, among other things, would prohibit teachers from teaching “divisive concepts.”

Here’s a concept that shouldn’t divide anyone: It is difficult to have productive discourse about liberty and justice in this country if we don’t first have command of basic truths.

It is telling that in 45 out of 50 states and the District of Columbia, social studies standards for teaching Reconstruction in grades K-12 are “partial” or “non-existent” according to a January report from Zinn Education Project, a nonprofit that supports the teaching of history in middle and high school classrooms nationwide.

That means most students (and adults) in this country have little to no understanding of one of the most critical moments in our nation’s history — the period from 1865 to 1877 when millions of formerly enslaved people made political, social and economic strides which were dismantled and later obscured by white supremacists.

“For decades people were taught this racist version of Reconstruction, which blamed the so-called faults of the Reconstruction government on Black people and the power they had acquired in the South during this period,” said Adam Sanchez, a spokesperson for Zinn Education Project and a high school teacher in Philadelphia.

But even the more enlightened teachings of Reconstruction can take a top-down view, he said in our recent phone conversation. “It is very much a history that takes away the massive struggles led by Black people uniting with poor white people across the South to fight for a different kind of government, public education, redistribution of wealth, voting rights — all of these issues that are still completely relevant today,” Sanchez said.

The Zinn report’s state-by-state analysis found Georgia’s standards for teaching Reconstruction to be “partial” and the content to be “subpar.” One standard asks students to compare and contrast the goals and outcomes of agencies like the Freedmen’s Bureau with white supremacist terror groups, as if the people and causes of those agencies share the same moral legitimacy, said report authors.

“If you look at the standards for reconstruction in Georgia, it is almost as if they were written in the 1990s,” said Sally Stanhope, a history teacher at Chamblee High School.

Stanhope told me that when she was in school, she learned about scalawags and carpetbaggers — pejorative terms invented by Lost Cause historians — but she never learned that those people were fighting for greater economic and political equality.

“Two decades later, standards still allow teachers to obscure the contingency of the era resulting in a citizenry that understands the perpetuation of white supremacy as the only course possible,” Stanhope said.

The irony, she said, is that Georgia had great moments of justice during Reconstruction, which Georgia students are not learning. William Finch, the first Black member of Atlanta’s City Council , helped create the city’s public school system even though it initially only served white children. It wasn’t until Finch retired from public office that city officials granted Black students the opportunity to participate in the system that Finch had fought so hard to establish.

Last year, Stanhope taught her students about the 33 Black state legislators who were elected by the people of Georgia but expelled from the Georgia General Assembly in 1868 by the previous all white legislature. She wishes she had also helped her students make the connection between the gerrymandering now taking place in Georgia as the modern day-equivalent of the expulsion of Black legislators more than 100 years ago.

But in the current climate, teachers who attempt to bring real world connections to Reconstruction era history fear they might find themselves caught up in accusations that they are teaching divisive topics.

“We are facing multiple crisis — racism, climate change, the pandemic. These are things that students desperately want to discuss,” Sanchez said. “The idea that we would mark some of these discussions as unfit for the classroom is just so backwards. The same people pushing these bills … benefit from racist policies, so, of course, they don’t want people to learn about racist history.”

You can’t teach Reconstruction without teaching about racism. And you can’t talk about the inequalities still present in America today without understanding Reconstruction.

Teaching the Reconstruction era honestly would invite all students to recognize that American progress is not linear and that the ideals we say we believe in are achievable if we can stop viewing “civil rights as a scarce resource” as Stanhope said, and start working together.

State legislators say they are worried about teachers indoctrinating kids in the classroom, but what they should worry about is rendering generations of Americans clueless about the foundations of this country.

[Nedra Rhone is a lifestyle columnist for the Atlanta Journal-Constitution where she has been a reporter since 2006. A graduate of Columbia University School of Journalism, she enjoys writing about the people, places and events that define metro Atlanta. She has written about style, entertainment, personal finance and the environment for the AJC. Previously, Rhone was a staff writer at Newsday where her first assignment was covering the devastating impact of 9/11 on the families and communities of Long Island. She later covered K-12 education for Long Island's 125 school districts and is a Pulitzer Prize finalist for her reporting on women in hip-hop.

Read more on the Real Life blog (www.ajc.com/opinion/real-life-blog/) and find Nedra on Facebook (www.facebook.com/AJCRealLifeColumn) and Twitter (@nrhoneajc) or email her atnedra.rhone@ajc.com.]