labor ‘January 6 Was a Real Wake-Up Call’: Us Unions Fight To Save Democracy

Labor leaders view this year’s elections – and 2024’s – with special urgency, as a goal-line stand to preserve America’s democracy. 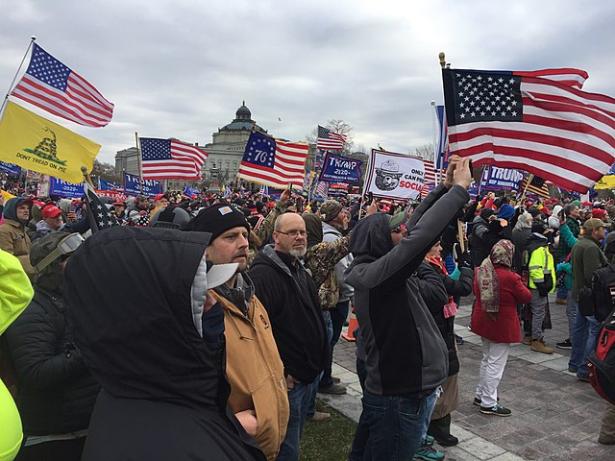 The Jan. 6 insurrection has led the labor movement to make the fight for democracy a key part of its electoral agenda.,Creative Commons

Many union leaders used to pooh-pooh talk about saving democracy, according to Shane Larson, the Communications Workers of America’s director of government affairs. All that changed after the January 6 assault on the Capitol and after many Republicans pushed to overturn Biden’s victory in several states.

“Just a few years ago, some union leaders would complain, ‘Why are we focusing on these do-good democratic issues?’ They’d say we need to focus exclusively on labor rights and jobs, jobs, jobs,” Larson said. “Now no one is complaining about this at all. There’s a real recognition that the entire labor movement has to be involved in this effort, that we have to do something for our democracy or we can lose it.

“January 6 was a real wake-up call,” Larson said. “Part of our effort is to hold accountable a number of insurrectionists running for some of these offices.” He mentioned the Arizona and Georgia secretary of state races in particular.

With their ability to mobilize tens of thousands of union foot soldiers, unions are one of the nation’s most powerful political forces, and labor leaders view this year’s election – and 2024’s – with special urgency, as a goal-line stand to preserve America’s democracy.

Traditionally focusing on presidential and congressional races, unions this year plan to focus far more than usual on state and local races – for instance, to prevent the election of secretaries of state and election commissioners who have embraced Trump’s “big lie” and signaled they might overturn their state’s 2024 vote results if the Democratic presidential nominee is ahead.

Unite Here, the hotel workers’ union, is known for being one of the nation’s most politically active unions, and this year it has expanded its political ambitions – not just to elect worker-friendly candidates, but to help preserve America’s embattled democracy.

For this year’s elections, Unite Here intends to build on its performance in 2020 when it had 500 full-time canvassers going door to door in Arizona, helping Joe Biden win that state. It also had an army of union members canvassing in Philadelphia, helping deliver Pennsylvania to Biden. That 300,000-member union later sent 200 canvassers to Georgia to help Raphael Warnock and Jon Ossoff win, giving Democrats control of the Senate.

Unite Here has broadened its effort this year, with a stepped-up focus on protecting voting rights – and democracy itself. It is already educating voters in Arizona and Georgia about how to navigate around newly enacted voter restrictions. Like many other unions, it hopes to provide a flock of poll watchers to help ensure that voters, especially voters of color, are not intimidated by the promised army of Trumpist poll watchers. To help Democrats retain control of the Senate, Unite Here plans to deploy hundreds of canvassers to help Mark Kelly of Arizona, Catherine Cortez Masto of Nevada and other Democratic senators win re-election.

“Our goal is to get back to what we had in 2020, a steady ramp-up to have 500 people moving around, going door to door, reigniting people to vote,” said Gwen Mills, Unite Here’s secretary-treasurer. “The work of democracy is labor-intensive, is people-intensive.”

Union leaders see two parallel strategies to preserve American democracy – one is to battle against efforts that roll back voting rights, reduce the political voice of minorities and enable hyper-partisans to skew, even overturn vote counts. The other strategy is to ensure that Democrats win key battleground states, especially longtime union strongholds Michigan, Pennsylvania and Wisconsin.

“There is no way that Donald Trump or the next Donald Trump or any anti-worker candidate can win the White House without winning those states,” said Steve Rosenthal, former political director of the AFL-CIO, the nation’s main labor federation.

Rosenthal said that if union households accounted for 25% to 30% of the vote in those states, as they did a quarter-century ago, instead of 15% 20% as they do now, Trump could not have won those states in 2016, nor win them in 2024. Rosenthal has founded a group, In Union, that is reaching out to hundreds of thousands of former union members in Michigan, Pennsylvania and Wisconsin – they perhaps lost their jobs and union membership when their factories closed. In Union seeks to explain to these voters which candidates are pro-worker and which aren’t. Thus far In Union has communicated with 1.2 million voters in those three states (including many non-union members who support unions) — and hopes to get funding to reach out to another 3 million.

Backed by unions and foundations, In Union seeks to build trust with those voters and explain, for instance, how Joe Biden would do more for blue-collar workers than Trump would. “What these voters are yearning for is a place they can go to to get information they trust,” Rosenthal said. “There’s a huge role for unions to play in this right now.”

Many labor leaders say Democratic lawmakers have hurt their party’s cause by doing little in recent decades to stop union membership from declining – a trend Joe Biden seems eager to reverse and many Republicans seem eager to accelerate. Unions often help Democrats by explaining to workers which party will do more for them. Unions have also helped prevent workers from growing resentful and embracing rightwing populists like Trump by helping assure economic gains for workers and by reducing racial resentment among white workers.

“Unions remain the only set of organizations in the US that can help prevent working-class whites from going conservative,” said Jake Rosenfeld, a sociology professor at Washington University.

Paul Spink, the head of the American Federation of State, County and Municipal Employees in Wisconsin, said one way to help save democracy would be to re-elect Tony Evers, Wisconsin’s Democratic governor. Spink said Republicans have so gerrymandered Wisconsin’s legislature that they are close to having a veto-proof supermajority even though Republicans often win less than 50% of the statewide vote.

“In recent months, there’ve been at least five or six bills the legislature passed to limit voting rights and undermine elections,” Spink said. “We’re trying very hard to keep a Democratic governor in this state to block those.”

Randi Weingarten, president of the American Federation of Teachers, says her union fights to protect democracy in many ways, for example, by opposing book bans and defending teachers who face punishment for teaching about racism.

“In many countries, labor unions have been a bulwark against authoritarianism,” Weingarten said.

Unite Here trains hotel workers to become leaders, with one winning a seat on the Phoenix city council. It pushed lawmakers to slam the Cyber Ninjas’ much-derided election review in Arizona. United Here says its canvassers knocked on 1m doors in Arizona in 2020 and talked with 125,000 infrequent voters, many of whom voted for Biden. It boasts that that helped assure Biden’s 10,457-vote victory in the state.

“I want other unions to have more people canvassing in these races, to do it in every state,” said Susan Minato, co-president of Unite Here Local 11 in Arizona and southern California. “That would be huge.”