With over five million members, the National Rifle Association (NRA) is much more than just the powerful lobby for gun owners and the supply chain of gun manufacturers and dealers. The NRA is a “party” within the Republican Party. 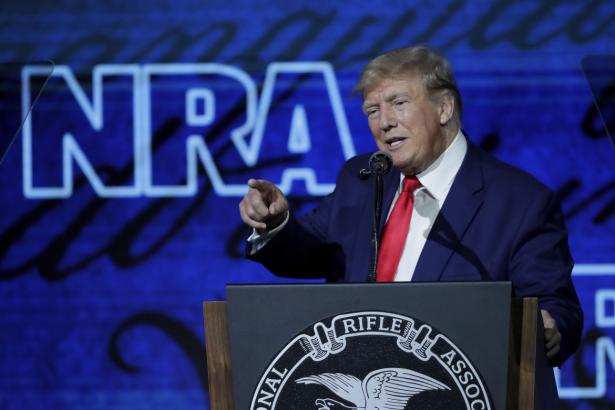 Donald Trump speaking at the NRA convention in Houston, Texas, days after the killings at the Uvalde school.,

It funds it, constrains it, dictates the laws it must support and indicates those it must oppose. It contributes, often decisively, to choosing candidates for elections and public offices, including that of the president of the United States.

Its members are staunch and zealous militants, fanatics who keep an eye on “their” politicians so they consistently implement and pursue the “NRA party line.” Trump is its acknowledged leader – and he used the occasion of the NRA’s convention in Houston, three days after the massacre at Uvalde Elementary School, to challenge Biden, hinting at his intention to run again in 2024, in an hour-long speech focused on “evil,” which he claimed was the real cause of tragedies such as the massacre of 19 children and two teachers.

The 212th massacre this year is thus the fault of “evil,” according to Trump: firearms and assault weapons are in no way to blame; quite the opposite, they are weapons of “good” when used to fight “evil,” to defend against disturbed and out-of-control individuals. For Trump, “[t]he existence of evil is one of the very best reasons to arm law-abiding citizens.” As a result, the massacres could be an opportunity for the gun industry to produce more of them, and for himself, the industry’s champion, once he is back in the White House, to protect the unrestricted possession and sale of guns. He concluded his speech at the NRA convention by promising that in the midterm elections in November, Republicans would take back the Senate and the House, and then take back the White House in 2024.

The message from Houston was not only aimed at enemy number one for the audience, Joe Biden, about whose policies he said: “If the United States has $40 billion to send to Ukraine, we should be able to do whatever it takes to keep our children safe at home” – which according to him should be accomplished with armed vigilantes on patrol and even armed janitors and teachers. The message was also addressed to his home rivals, other Republicans, some of whom have budged a little, albeit insignificantly, in the face of the mounting pressure for some form of regulation of assault weapons at least, such as the one used by the shooter in Uvalde.

Also significant was the mention of Ukraine, to mark a dividing line which Trump seems to want to draw to define his political platform, in contrast to potential Republican rivals for the next presidential nomination – who are even more reactionary than him, such as Pence, De Santis, Cruz, Pompeo, but who basically agree with the White House regarding support for Kyiv. A few days ago, he had been even clearer, after the House approved a substantial aid package for Kyiv, which was also voted by a majority of House Republicans: “The Democrats are sending another $40 billion to Ukraine, yet America’s parents are struggling to even feed their children,” he said, referring to the sudden shortage of baby formula in the US, an issue that became something of a national emergency just as the White House was most engaged on the international front.

There is hardly any connection between those two issues other than in Trump’s own head, but the message was clear: aid to Ukraine and ever-increasing military involvement by sending increasingly sophisticated weapons, such as long-range MLRS rockets, are going to lead to a backlash. Indeed, “war fatigue” is already being felt in the US, and if we don’t see some positive results achieved in the war by November, Trump will only hammer harder on the issue, tying it as much as he can with the domestic issues that are hitting people’s wallet. He will also be able to play on the expectations of the middle class, of the many Americans who are following the war in Ukraine less and less and who are increasingly anxious about the rising cost of living.

The speech at the NRA convention confirmed the ex-president’s remarkable active role, not only in pursuing the path of a future presidential challenge but also in supporting his loyalists in running for the upcoming congressional and statewide offices. Here, Trump has suffered several setbacks, with some of his candidates knocked out of the race, as in Georgia, with the landslide defeat of the Trumpian Perdue in the Republican primary for governor, a sign that Trump’s presidential bid will encounter plenty of bumps in the road.

His own fundraising drawing power seems to be on the wane, but it is still considerable, averaging $202,185 a day in donations, down from $324,185 in September. It remains at a level impossible to reach by any other challenger in the Republican primaries; and one should keep in mind that the contest is now clearly being played out on Trump’s home turf, between Trump himself and challengers competing on his own ideological terrain, dubbed Make America Great Again (MAGA).

Biden and his strategists are aware of the enormous danger that comes with the midterm elections. This is why they want to transform it from a referendum about the first half-term of the sitting president, as is usually the case, into a referendum on the risk posed to democracy by Trump’s MAGA movement. The US is facing a risk of “Lebanonization,” in the words of Thomas Friedman, who recounted how during his formative years as a journalist covering Lebanon in the 1970s, he watched Lebanese politicians sink their fragile democracy into a protracted civil war – something that is at risk of happening in the US as well.

Three days before Christmas, in 2000, reporters at the Italian daily newspaper il manifesto assembled in the newsroom of their Rome headquarters for the usual editorial staff meeting. At the same time, a strange man approached the front door with a package decorated in holiday gift wrap and set it on the floor. The man was Andrea Insabato, a right-wing hardliner, and the gift was a bomb.

But he set it incorrectly, and it erupted before he could dash away. “There was a huge explosion,” said Riccardo Barenghi, editor of the paper at the time. “The front door had been blown in, and on the landing there was an injured man in a pool of blood.” All the journalists, gathered inside for their meeting, were unharmed.

Il manifesto is the kind of newspaper that makes stupid people want to blow it up.

It was founded in 1969 on the idea that truth and freethinking are more important than everything else, including profit. [ Read more here ]