The discovery of a plaque showing a member of the Ku Klux Klan at the US military academy made headlines. One member of the commission which recommended its removal is a historian of the US army and the lost cause myth. 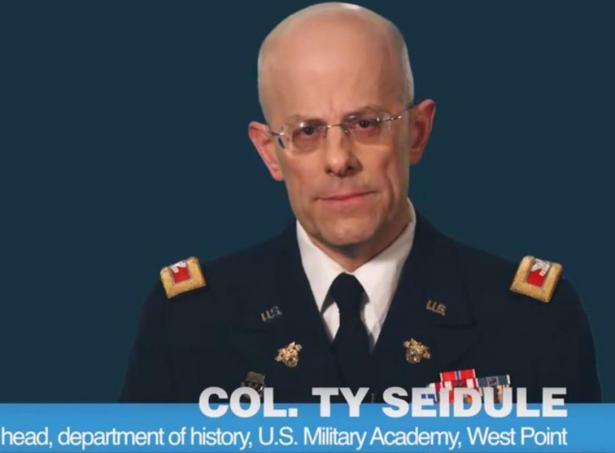 The discovery of a plaque showing a member of the Ku Klux Klan at the US military academy made headlines. One member of the commission which recommended its removal is a historian of the US army and the lost cause myth

In a 36-year army career, Ty Seidule served in the US, Germany, Italy, Kenya, Kosovo, Macedonia, Saudi Arabia and Iraq. He retired a brigadier general.

An emeritus West Point history professor, he now teaches at Hamilton College. His online video, Was the Civil War About Slavery?, has been viewed millions of times, and in 2021 he published a well-received book, Robert E Lee and Me: A Southerner’s Reckoning with the Myth of the Lost Cause.

Robert E. Lee and Me: A Southerner's Reckoning with the Myth of the Lost Cause

Outside academia, Seidule is a member of the Naming Commission, a body set up in the aftermath of the police murder of George Floyd and the protests for racial justice it inspired, tasked with recommending changes to military memorials to Confederates who fought in the civil war.

Asked how the US military came to name bases, barracks, roads and other assets after soldiers who fought to secede from the union and keep Black people enslaved, Seidule said: “The first thing to know is that in the 19th century, most army officers saw the Confederates as traitors.

“That’s not a presentist argument. That’s what they thought. And particularly about Lee, who renounced his oath, fought against this country, killed US army soldiers and as [Union general and 18th president Ulysses S] Grant said, did so for the worst possible reason: to create a slave republic.

“So in the 19th century, they would not have done this … the first memorialisation of a Confederate at West Point is in the 1930s. So, why is that? [It’s about] segregation in America. The last West Point black graduate was 1889. The next one was in 1936. West Point reflects America. [The first memorials] were a reaction to integration.”

Seidule rejects the notion that memorials to Lee and other Confederates – PGT Beauregard, a West Point superintendent fired for sedition, William Hardee, a commandant who fought in the west – might be claimed as symbols of reconciliation.

“The problem with that is it was reconciliation among white people, at the expense of Black people.

“There had already been reconciliation. Magnanimously, the United States of America pardoned all former Confederates in 1868 … reconciliation is sort of an agreement among whites that Black people will be treated in a Jim Crow fashion. So no, it’s not a reconciliation based, I would say, on an America we want today.”

Last week, the Naming Commission made headlines when it highlighted a bronze at the United States Military Academy which depicts a member of the Ku Klux Klan.

Seidule told the New York Times that though the Klan bronze fell outside the remit of the commission – the racist terror group was founded after the defeat of the south – the panel chose to highlight it “because we thought it was wrong”.

The commission has issued reports concerning military bases and the military and naval academies. It will present its final report in October. Speaking to the Guardian, Seidule cited such ongoing work as reason not to discuss the Klan plaque further. But West Point did so on its Facebook page.

It said: “There is a triptych (three bronze panels) at one of the entrances of Bartlett Hall [the science centre] that depicts the history of the United States. The artwork was dedicated on 3 June 1965 … As part of the middle panel titled ‘One Nation, Under God, Indivisible’, there is a small section that shows a Ku Klux Klan member.

“The artist, Laura Gardin Fraser … wanted to create art that depicted ‘historical incidents or persons’ that [documented] both tragedy and triumph in our nation’s history.”

Noting that the work was dedicated to graduates who served in the second world war and the Korean war, West Point added: “The academy strives to graduate diverse leaders of character for our nation.”

Lee did not lead the Confederacy. Its president was Jefferson Davis, a former secretary of war and senator from Mississippi. But Lee, who died in 1870, became the most-memorialised Confederate.

Asked why, Seidule said: “If you think of Confederate monuments, of the burning of books which the United Daughters of the Confederacy did in the early part of the 20th century, to ensure that textbooks said the right thing, really it’s that every religion needs its God. And in a way, that’s what Lee became.”

Today, conservatives are banning books in attempts to control teaching of history, race, sexuality and other culture-war issues..

Seidule concentrates on his historical work. Lee, he said, was in part idealised for lack of other options. James Longstreet enjoyed battlefield victories but after the war “fought for biracial democracy in New Orleans. So you can’t use him.

“While Lee ended up losing hugely, completely defeated, his armies destroyed, he was successful for a time before that. And so he was seen by the white south as their best general, as their ideal. And by the 1930s, he comes to represent something not just in the south, but among white Americans in general.”

Beyond West Point, the Confederate battle flag has become a symbol of rebellion, reaction and racism more potent than any statue or building. On 6 January 2021 it even flew in the halls of Congress, when Trump supporters attacked.

Again, Seidule rejects any notion that use of the flag might in any way be excused.

“We have to remember that it really didn’t mean that much different then than it does now. In 1863 it represented the Army of Northern Virginia, which was fighting to create a slave republic. Now, some people say it reflects rebellion. But remember, this was rebellion to create a slave republic. And so, to me, it is a symbol of all that America is not.

“It’s a symbol of insurrection, it’s a symbol of somebody that would not take the results of a democratic election. I grew up with it, my dad had Confederate flags over the mantle. I know how powerful these symbols are.

“One thing we often do with the civil war as historians is we let the smell of gunpowder seduce us into thinking about the war as American football, [about the] Xs and Os of military history, without understanding the purpose. That’s the thing I always come back to: why this cruel war?”

Seidule’s next book will be about events at West Point towards the end of another cruel war: Vietnam. In 1971, Richard Nixon decided he wanted to oversee “a moral rebirth” of an army in disarray.

“OK,” Seidule says, “that’s great. But the next thing he does is go to Trophy Point”, the focal point of the West Point campus, high over the Hudson river. “If you’ve seen Battle Monument, you know it says on there, ‘the War of the Rebellion’. Nixon says, ‘Where’s the Confederate monument?’ So he orders the superintendent to put a Confederate monument on Trophy Point.

“And the Black cadets find out. And they nearly mutiny and they write a manifesto based on the Attica uprising” – at a New York prison in 1971 – “and [eventually] just so many things change.

“They put on a concert to raise money for sickle cell anemia research, featuring Stevie Wonder and the Supremes, up at Michie Stadium”, the home of Army football. “They bring Louis Farrakhan to talk. They institute remarkable change, which I’m arguing comes from one of the most successful protest movements in American military history that nobody knows about, and eventually it kills the Confederate monument.

Robert E Lee and Me: A Southerner’s Reckoning with the Myth of the Lost Cause is published in the US by St Martin’s Press