What Antisemitism Is, What It Is Not, and Why It Matters

Antisemitism, like all forms of injustice, harms people and communities. Many Jewish organizations speak about criticism of Israel or Zionism as antisemitic, but that is a misuse and, in fact, an abuse of what antisemitism is. 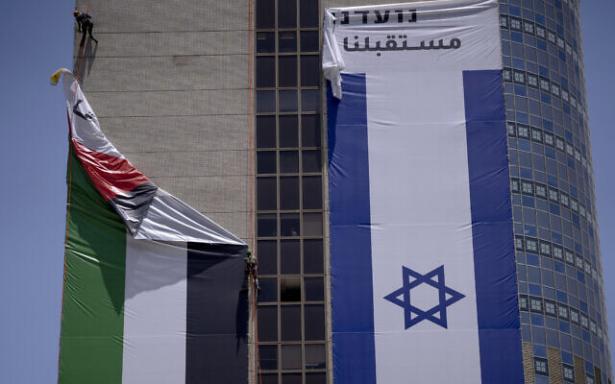 A Palestinian flag is removed from a building by Israeli authorities after being put up by an advocacy group that promotes coexistence between Palestinians and Israelis, in Ramat Gan, June 1, 2022.,Oded Balilty/AP Photo // The Times of Israel

As we enter the Jewish New Year, many Jews are beginning to reflect upon our past year and consider how we — individually and collectively — can participate in creating a more just world in the year to come. One of the critical issues that I hope will engender a good deal of reflection in our Jewish communities is how we speak and think about antisemitism, and why it matters.

Antisemitism, like all forms of injustice, harms people and communities. In recent years, we have witnessed Jews being murdered in synagogues, Jewish cemeteries being desecrated, and visibly religious Jews being harmed. We have seen the growth of white nationalist and white supremacist movements that, in different forms, denigrate and target Black people and other communities of color, queer and trans people, Muslims, immigrants and Jews. We have seen so-called political leaders doing much the same.

Resisting antisemitism must be part and parcel of our collective work for liberation and justice. But — and there is a but here — much of the organizing against antisemitism by mainstream Jewish organizations actually makes it more difficult to challenge antisemitism and to participate in work for collective liberation.

Many Jewish organizations speak about criticism of Israel or Zionism as antisemitic, but that is a misuse and, in fact, an abuse of what antisemitism is. Antisemitism is directed at Jews as Jews. Criticism of Israel or Zionism is directed at a nation-state. There is nothing discriminatory or antisemitic about challenging any or all policies of a nation-state, including the Jewish state.

There are critiques of Israel and Zionism that grow out of a deep commitment to human rights. This commitment is not about being against anyone, but, rather, it’s about the unwavering support of equal rights for all. Zionism is a political movement that resulted in the dispossession and expulsion of 750,000 Palestinians from their land and homes. Opposing that movement in favor of a movement that honors and respects all who live there is an important principle to uphold. That is not remotely antisemitic. In truth, conflating anti-Zionism and antisemitism turns the focus far away from fighting antisemitism and envisioning a world in which all people are treated with dignity, and, instead, is about building support for Israel’s unjust, discriminatory system that privileges Jews over all others and continues to engage in land theft and enormous violence against Palestinians.

When I was a young Zionist activist in college — before I learned about the consequences of Zionism on the Palestinians living there — I went to a hasbara (propaganda) training at the Israeli Consulate. I remember being shocked that one of the things we were told was that when someone argued against Israel, not to address the argument, but, instead, to accuse the person of antisemitism. This tactic has become much more widespread today and it’s why dangerous definitions of antisemitism, like the one put forth by the International Holocaust Remembrance Alliance (IHRA), which conflates criticism of Israel with antisemitism and has gotten much attention, must be vehemently opposed.

The IHRA definition comes appended with 11 illustrative examples of antisemitism, seven of which specifically focus on the state of Israel, rather than Jews as a group. One such example: “Applying double standards by requiring of it a behavior not expected or demanded of any other democratic nation.” What does that even mean? Is this something we would even consider as a problem in any other international issue? Of course not. People have a right to focus on issues that move them, and for many of us who are Jewish, we feel an obligation to make clear Israel does not have our support and to speak out about the injustices being committed. And, frankly, for Palestinians or anyone concerned with human rights and justice for the Palestinian people, it should be quite obvious why they would focus on this issue. That is not antisemitic.

[Donna Nevel, a community psychologist and educator, is a long-time Jewish activist living in South Florida.]

This op-ed originally appeared in the South Florida Sun Sentinel