"Workers increasingly serve businesses that do not officially 'employ' the worker — a distinction that hampers organizing, erodes labor standards and dilutes accountability," said Catherine Ruckelshaus, general counsel for the National Employment Law Project, which advocates on behalf of low-wage workers. A recent Federal Reserve study showed that nearly 7.5 million people who are working part time — contract workers included — would rather have full-time jobs. 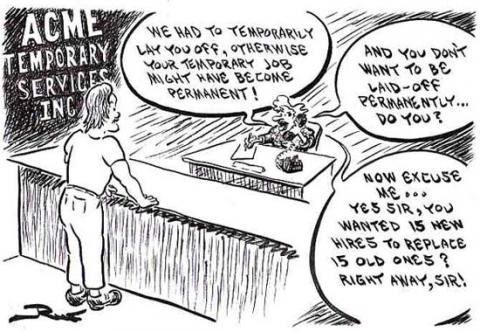 WASHINGTON (AP) — While the U.S. economy has improved since the Great Recession ended five years ago, part-time and "contract" workers are filling many of the new jobs.
Contract workers made up less than half of one percent of all U.S. employment in the 1980s but now account for 2.3 percent. Economists predict contract workers will play a larger role in the years ahead.
They are a diverse army of laborers, ranging from janitors, security officers, home-care and food service-workers to computer programmers, freelance photographers and illustrators. Many are involved in manufacturing. Many others are self-employed, working under contracts that lay out specific responsibilities and deadlines.
Labor leaders and many economists worry. Contract workers have less job security and don't contribute to the economy through spending as much as permanent, full-time workers. Nor do they have the same job protections. Few are union members.
"It is not hugely clear that we're coming into a temp-worker, contract-worker, contingent-worker nation. But it's something to keep an eye on," said Heidi Shierholz, an economist with the labor-oriented Economic Policy Institute. "There's definitely been an increase in the share of those working part time."
Part-time and contract jobs in the past tended to rise during recessions and recede during recoveries. But maybe no longer: Part-time workers have accounted for more than 10 percent of U.S. job growth in the years since the recession officially ended in June 2009. Meanwhile, union membership has been sliding steadily since the mid-1980s.
Businesses often hire contract workers or freelancers because it is less expensive than hiring full-time workers.
"Workers increasingly serve businesses that do not officially 'employ' the worker — a distinction that hampers organizing, erodes labor standards and dilutes accountability," said Catherine Ruckelshaus, general counsel for the National Employment Law Project, which advocates on behalf of low-wage workers.
Many business leaders have a different take.
"Some people don't want to be a full-time employee. They want contract work," said Bruce Josten, executive vice president of the U.S. Chamber of Commerce. Still, Josten recognizes some of them "are hoping the contract work will ultimately lead them into a full-time position."
A recent Federal Reserve study showed that nearly 7.5 million people who are working part time — contract workers included — would rather have full-time jobs.
Jerry Jasinowski, who served as president of the National Association of Manufacturers for 14 years and later as president of the Manufacturing Institute, said despite criticism leveled against contract workers from some quarters, "I think on balance, they are a positive reflection of the extent to which production has become much more flexible, a reflection of hybrid operations. Some people don't like it. But that's neither here nor there. That's where everybody's moving."
Analysts suggest the increase in contract and "temp" jobs will likely accelerate as more baby boomers retire from their full-time jobs.
Pressure from a company's shareholders — often focused on short-term returns — can also lead businesses to lower labor costs by reclassifying a portion of their payroll as part-timers or spinning them off to a contracting agency.
The online job site CareerBuilder.com, which specializes in "contract placement," cites research showing that 42 percent of employers intend to hire temporary or contract workers as part of their 2014 staffing strategy — a 14 percent increase over the past five years.
The issue got the spotlight when President Barack Obama in February unilaterally upped the minimum wage for federal contractors and their employees from $7.25 to $10.10 an hour, fulfilling a top demand by liberal lawmakers and groups. The higher rates kick in Jan. 1.
"America does not stand still, neither do I," Obama said. Aides said more than 2 million employees whose companies have federal contracts are affected. Obama's proposal to raise the minimum wage nationally by the same amount remains bogged down in Congress.
A recent Brookings Institution study labeled the first decade of the 21st century a "Lost Decade" for the labor market. For the first time since World War II, the U.S. economy did not have more payroll jobs at the end of a decade than at the beginning. And the shadow of the December 2007-June 2009 recession still looms over today's labor market.
Subscribe to Portside