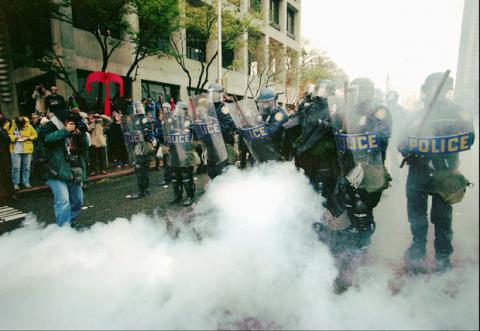 Police in full riot gear firing tear gas into a residential neighborhood in Ferguson, Missouri: The image was shocking to many citizens of the United States. To many others, it was no surprise at all,AP Photo/Stevan Morgain // Citylab

Many thousands of Israeli peace protestors had been expected to arrive at Rabin Square tonight, to voice their solidarity with the people of Gaza. But once again, the Israeli police decided that freedom of speech simply does not apply to those speaking out against the actions of the Israeli State.

Police announced that peace protestors will not permit the demonstration to take place. An Israeli Home Front Command has placed restrictions on what they define as simply "large gatherings."

Now simply "gathering" to speak out against the war is ILLEGAL in Israel. This comes after weeks of growing protests, number in the thousands, began embarrassing the Israel right wing hawks. Israeli citizens were clearly not of one mind. An exponentially growing number were coming out to oppose the War on the Gazan people. Now, the Israeli Home Front Command, in collusion with the police, have simply banned peace protests.

The Fergusons We Already Forgot

Police in full riot gear firing tear gas into a residential neighborhood in Ferguson, Missouri: The image was shocking to many citizens of the United States. To many others, it was no surprise at all, simply part of a pattern of escalating police tactics that includes SWAT teams breaking into people's houses in the middle of the night and suppressing peaceful demonstrations with paramilitary techniques.

When police initially responded to demonstrators by facing off, wearing riot gear and deploying tanks and rifles, the result was escalating violence. When, later in the week, cops took off the body armor and walked among the protesters, the situation immediately calmed.

It seems like the ultimate teachable moment. But let's not forget that we've had plenty of chances to learn from similar mistakes in the recent past. Below are just some of the cases the U.S. has experienced in just the past 15 years. These lessons are seemingly slow to sink in.

By now you've heard what's been going on in Ferguson, Missouri: How an unarmed black man -- the latest in a long series, historically speaking -- was gunned down by a cop; how suspicion of a cop cover-up was followed by protests and rioting; and how people are appalled by the weird storm-trooper approach of the Ferguson PD.

Rightbloggers heard about it, and many took their traditional approach to such situations -- i.e. the old ooga booga attack on black people. Others, perhaps influenced by that "libertarian moment" thing all the kids are talking about, attempted to adopt a more civil-libertarian position -- but clumsily, like dogs trying to boil water, and with equally painful results.

After Michael Brown was killed in Ferguson on August 9 and word started to get around that the killing might not have been as kosher as the cops said it was, many of the brethren went about dealing with this dead unarmed black guy the way they deal with all dead unarmed black guys: slurring the deceased, and portraying the negative reaction of his friends, family, and community as proof that black people are thugs, the real racists, etc.


Why the Drug Industry Hasn't Come Up with an Ebola Cure

The global research and development investment for neglected diseases totaled $3.2 billion in 2012, with almost two-thirds of that coming from the public sector, according to the G-Finder annual survey from Policy Cures. Drug companies pitched in about 16 percent, or about $527.2 million in all, the survey found.

So the key question is how to encourage drugmakers to develop cures for these diseases, when the economic incentives don't match up with the public health needs. For drugmakers, the system incentivizes them to focus research and development efforts on products that will pay off. Think blockbuster drugs that come with patent protections.

"You really have to break this link between patent monopolies and research investment," said Bryan Collinsworth, executive director of Universities Allied for Essential Medicines.

D.W. Hunter, the great grandson of Anna Short Harrington, the woman known as Aunt Jemima, has filed a class action lawsuit against PepsiCo, The Quaker Oats Company, Pinnacle Foods Group and The Hillshire Brands Company on behalf of all of her great grandchildren. He is seeking $2 billion, plus punitive damages to be determined at trial.

Hunter alleges that the companies conspired to deny that Harrington had been an employee of Quaker Oats, all the while exploiting her image and recipes for profit, but refusing to pay an "equitable fair share of royalties" to her heirs for more than 60 years.

The claims come on the heels of the defendants allegedly receiving a certified death certificate for Harrington that listed Quaker Oats as her employer. Hunter further alleges that the companies have lied by claiming they could not find any employment records for Harrington, or images of her, yet they had her image deposited inside the U.S. Patent and Trademark Office, according to the document.

A Co-op State of Mind

The worker cooperative model, in which a business is owned and controlled by its members, is rarely taught in U.S. business schools, but it is gaining a reputation as a way for social service agencies and city councils to provide jobs for workers marooned by the current economy.

"There just aren't enough jobs for all the people who need and want them," says Jessica Gordon Nembhard, associate professor of community justice and social economic development at New York's John Jay College, and author of Collective Courage: A History of African American Cooperative Economic Thought and Practice. "Worker cooperatives address that niche."

Social and economic justice activists also favor worker cooperatives as a way of enabling workers to participate democratically in their workplace. Co-ops are seen as a key component of what is called the "solidarity economy." That term encompasses democratic, environmentally conscious and socially responsible companies, along with alternative exchanges such as trade and bartering-any economic system that emphasizes concern for people and economic justice over pure profit.