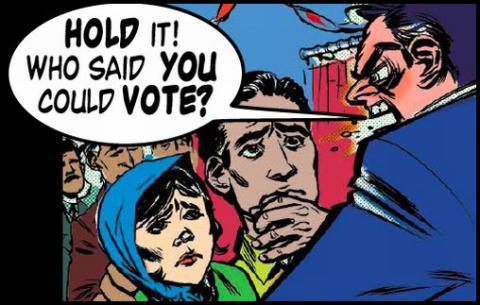 By Dr. Julianne Malveaux, PhD, BC Editorial Board
October 9, 2014
The Black Commentator

This week the Supreme Court blocked an appeals court ruling that would have restored seven days of voting in Ohio.  In just three sentences, the court reduced voting access to tens of thousands of Ohioans, in yet another effort to suppress the vote.  In North Carolina, the Appeals Court granted an injunction to restore same day registration and out of precinct voting.  It didn't strike down early voting restrictions because of time constraints, but they did acknowledge that reducing early voting is a way to suppress the vote.  If the North Carolina case goes before the Supreme Court, the Supreme Court is likely to lift the injunction in North Carolina, again making voting more difficult.

When the Voting Rights Act was attacked, too many tuned out and turned off from the details, although leaders like Barbara Arnwine of the Lawyers Committee for Civil Rights Under Law warned that we would begin to feel the effects of this legal setback with various forms of voter suppression.  The Lawyers Committee developed a "map of shame" to show the many states that had curtailed ballot access.  Either more ID has been required, the days and times of voting have been changed, the number of polling places has been reduced, or other barriers have been introduced to curtail voter access.  Those who would suppress the vote in 2014 have put those who advocate ballot fairness on notice.  2014 is the first step toward a suppressed or stolen 2016 election.

The stakes are high, both now and in 2016.  Presently, Democrats hold the Senate, and provide at least some help to President Obama on issues of political and economic fairness.  It is very possible that Republicans will take the Senate; it is a foregone conclusion if people don't vote this year.  Republicans now hold the House of Representatives; their presence is the House is likely to increase without a strong vote on November 4 (and in the weeks before, with early voting).

President Obama's effectiveness has been weakened by the Boehner Congress that has thwarted the him at every turn.   Although these last two years of the Obama Presidency are lame duck years where little is likely to get done, the duck will be not lame, but paralyzed, if the Republicans hold both the House and the Senate.  President Obama's only powers, then, will be the Executive Order and the veto.  It is unlikely that the minimum wage will be adjusted upward, or that other economic fairness matters will be addressed if Congress is a Republican stronghold.

Lots of pro-democracy organizations are working to get out the vote for the 2014 elections, with local and state office as important as federal office.  Secretaries of state, for example, are the chief elections officers for their state.  As such, they have significant power around the mechanics of voting.  They can decide to open more polling places, to have more (or fewer) voting machines available, and to manage the details of voter registration.  In Ohio, where a week of early voting has now been eliminated, Nina Turner, a charismatic African American state legislator with her efforts clearly focused on justice, is a candidate for Secretary of State.  Her election would be an antidote to voter suppression efforts in Ohio, and an inspiration for those who cherish election fairness.  Imagine how different voting conditions would be if in states like North Carolina, Florida, and other "stars" on the Map of Shame had progressive Secretaries of State!

Voter suppression is not new.  We've seen grandfather clauses, poll taxes, and literacy tests as historical barriers to the vote.  Now, we see a reduction in voter flexibility, with more ID requirements, fewer early voting days, and stricter rules about voter registration.  Still, those who would suppress the vote can do so only if we allow it by failing to vote.  There are too many important elections to be decided, like Nina Turner's in Ohio, for voters to stay home.

[Black Commentator Editorial Board Member Dr. Julianne Malveaux, PhD is the Honorary Co-Chair of the Social Action Commission of Delta Sigma Theta Sorority, Incorporated and serves on the boards of the Economic Policy Institute as well as The Recreation Wish List Committee of Washington, DC.  A native San Franciscan, she is the President and owner of Economic Education a 501 c-3 non-profit headquartered in Washington, D.C. During her time as the 15th President of Bennett College for Women, Dr. Malveaux was the architect of exciting and innovative transformation at America's oldest historically black college for women.  Click here to contact Dr. Malveaux and BC.]

FAYETTEVILLE, NC: The North Carolina NAACP will hold a press conference at 11:45 a.m. on Thursday, October 9, 2014 to address the decision handed down this afternoon by the United States Supreme Court, which blocked the 4th Circuit Court of Appeals' ruling last week to allow same-day registration and out-of-precinct voting in the upcoming elections in North Carolina.

"We are disappointed with the Supreme Court's ruling today," Rev. Dr. Barber said. "Tens of thousands of North Carolina voters, especially African-American voters, have relied on same-day registration, as well as the counting of ballots that were cast out of precinct, for years. As the appeals court correctly concluded, eliminating these measures will cause irreparable harm of denying citizens their right to vote in the November election - a right that, once lost, can never be recovered. The Forward Together Moral Movement will continue our fight for voting rights, making sure that, county by county, as many votes as possible are counted despite the barriers posed by the Supreme Court's ruling. We will also charge onward in court, in the full trial next summer, to ensure that this restrictive and discriminatory law is permanently overturned."

Rev. Dr. Barber will discuss in further detail how this decision affects the upcoming elections and the progress of the Forward Together Movement.