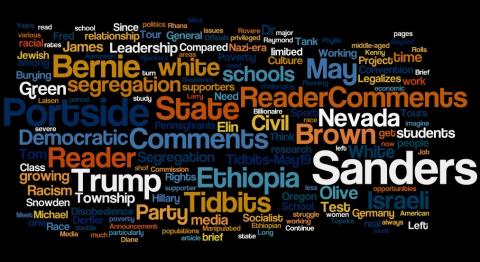 Tidbits - Reader Comments and Announcements - May 19, 2016, Portside
Resources; Announcement:
Re: Test of Leadership as Sanders Rolls in Oregon
Sanders was clearly still angered by the machinations in the Nevada caucus, where Democratic officials astonishingly accused the Sanders campaign of "having a penchant for violence" after peremptory rulings disqualifying Sanders delegates touched off a fracas from livid supporters.
Sanders asserted that the Democratic Party is "going to have to make a profound and important decision. It can do the right thing and welcome into the party people who are prepared to fight for real economic and social change. The other option for the Democratic Party is to choose to maintain its status quo structure, remain dependent on big money contributions and be a party of limited participation and limited energy."
Diane Laison
Posted on Portside's Facebook page
How Democrats Manipulated Nevada State Party Convention Then Blamed Sanders For Chaos
The real story. Check it out. 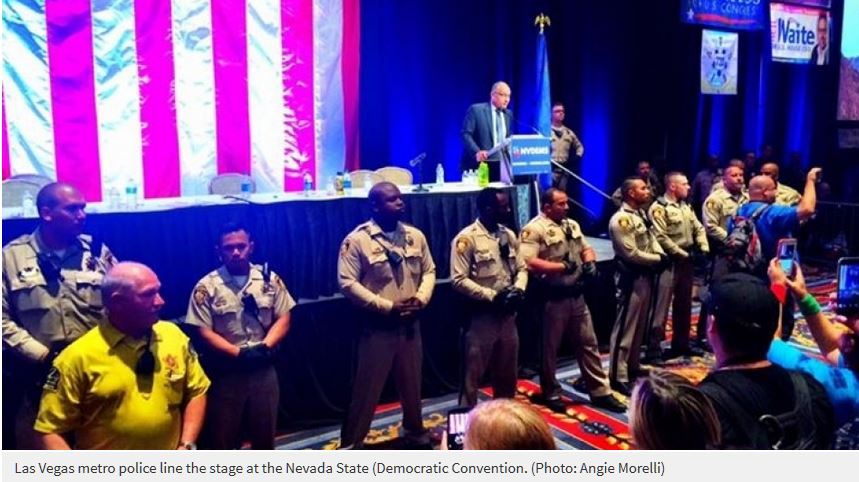 "Days after a convention in which leaders incited chaos and disorder, the Nevada State Democratic Party demonized supporters of Bernie Sanders in a letter written to the Democratic National Committee."
from Common Dreams
Fred Niles
Re: The Political Revolution Will Continue Long After Bernie Sanders' Campaign. Here's How
Maybe so. But so far Bernie hasn't helped that political revolution by refusing to back his supporters who are challenging incumbent conservative Dems. In Oregon there are three of them running for senator, governor and 5CD rep who would get a big boost if Bernie would at least mention them at one of his rallies in the state. But no; he hasn't.
Michael Munk
Re: Burying the White Working Class
(posting on both Portside and Portside Labor)
Good read if one is a Bernie supporter! Terribly difficult read if you're an HRC supporter I suspect!
William Proctor
Posted on Portside's Facebook page
====
"White male privilege" remains alive in America, but the phrase would seem odd, if not infuriating, to a sixty-year-old man working as a Walmart greeter in southern Ohio. The growing strain of identity politics on the left is pushing working-class whites, chastised for various types of bigotry (and sometimes justifiably), all the more decisively toward Trump.
Last fall, two Princeton economists released a study showing that, since the turn of the century, middle-aged white Americans-primarily less educated ones-have been dying at ever-increasing rates. This is true of no other age or ethnic group in the United States. The main factors are alcohol, opioids, and suicide-an epidemic of despair. A subsequent Washington Post story showed that the crisis is particularly severe among middle-aged white women in rural areas. In twenty-one counties across the South and the Midwest, mortality rates among these women have actually doubled since the turn of the century. Anne Case, one of the Princeton study's co-authors, said, "They may be privileged by the color of their skin, but that is the only way in their lives they've ever been privileged." (link to The New Yorker article here.) 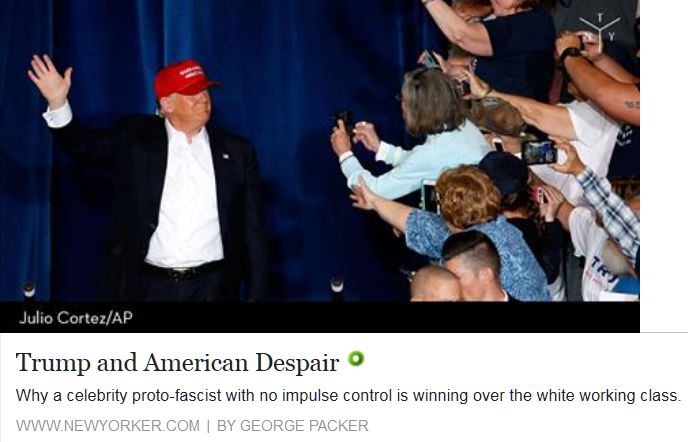 Elin Derfler
Posted on Facebook - Re-Posted on Portside's Facebook page
====
thank you Elin Derfler. see also various articles on Portside on this and related issues....
Tom Edminster shared Elin Derfler's post
Posted on Portside's Facebook page
Re: Do We Need a Socialist Think Tank?
This is a good article on the history of #thinktanks. It poses a question of the importance of #socialist think tanks but doesn't spend much time developing the idea. it is hard to imagine we couldn't get competent scholars to participate. Immanuel Wallerstein Christopher Chase-Dunn David Harvey Richard Wolff Michael Hudson Erik Olin Wright  Let's get started!
Planning Beyond Capitalism
Posted on Portside's Facebook page
Re: The Israeli General who Compared the Jewish State to Nazi-era Germany
I saw a documentary, must have been about 20 or 30 years ago, about how non-Jews were treated on the streets of Jerusalem. I had the same thought. The roles had reversed. The once oppressed had become the oppressor. I can't even imagine how bad it must be now.
James Festerman
Posted on Portside's Facebook page
====
When the second from top Israeli general publicly says this, you know it's a serious situation --
Alfred Rose
Posted on Portside's Facebook page
Re: Saudi Officials Were 'Supporting' 9/11 Hijackers, Commission Member Says
I'm glad to see you are addressing this issue but disappointed you didn't mention Senator Bob Graham of Florida.  He's been asking for the release of these pages for a long time.
Rhana Bazzini
Re: Pennsylvania Township Legalizes Civil Disobedience
Now THIS is what a governmental body that serves the people looks like.
James Kenny
Posted on Portside's Facebook page
====
All of you involved in municipal or state governments, take a page from the Grant Township laws -- 3rd article down. It legalizes civil disobedience!!!...in this case fighting a corporation wanting to pipe fracking wastewater into its township!!!
Tom Smith
Posted on Portside's Facebook page
Re: 31 Years Since Philadelphia Police Bombed Its Own Residents
One of the worst shames of the times.
Phyllis Mandel
Posted on Portside's Facebook page
====
The MOVE family need to be honored with a street name in their honor.
Raymond Brown
Re: Snowden Interview: Why the Media Isn't Doing Its Job
Edward Snowden: One of the most challenging things about the changing nature of the public's relationship to media and the government's relationship to media is that media has never been stronger than it is now. At the same time, the press is less willing to use that sort of power and influence because of its increasing commercialization. There was this tradition that the media culture we had inherited from early broadcasts was intended to be a public service. Increasingly we've lost that, not simply in fact, but in ideal, particularly due to the 24-hour news cycle.
Larry Aaronson
Posted on Portside's Facebook page
Re: Trump, Racism and the Left
Totally agree that Trump and the Right needs to be defeated.  My concern is that in our rush to defeat Trump we ignore the reality that the Clinton/Clinton/DNC troika is hardly any better.  By emphasizing NO on Trump we de-emphasize YES on Sanders. Trump is certainly a real threat.  No argument there.  So is Clinton.  By focusing on No we throw ourselves into the arms of the same old pretend-to-do something while actually doing nothing. We need to work for the positive and not work only against the negative. Are we really in this struggle to merely stand still?  Or are we in this struggle to move forward?  I'm no scientist, political or other, but my experience as a former ballet dancer and then teacher has shown me that Yes always wins out over No.  Get off the anti- and onto the positive.  Or, as the children I worked with always said:  Get out of No Land.  And to add, be careful what you wish for.
Claire Carsman
Re: Dr. Billionaire, Meet Dr. Salk
I don't understand "gentile tax bites." Did he mean "gentle"?
Peace,
Vicki Rovere
Today in History - Malcolm X was born 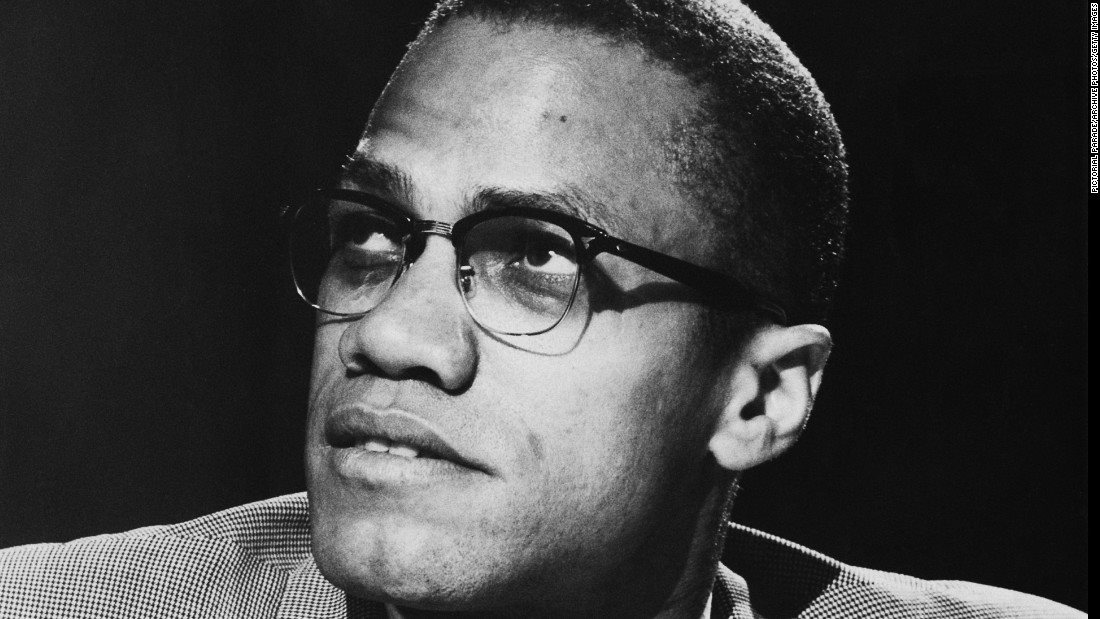 On This Day in 1925, Malcolm X, also know as el-Hajj Malik el-Shabazz, was born. He would go on to become one the most influential activists in American history.
Teaching Tolerance
Brown at 62: School Segregation by Race, Poverty and State
Authors: Gary Orfield, Jongyeon Ee, Erica Frankenberg, and Genevieve Siegel-Hawley
May 16, 2016
The Civil Rights Project - University of California, Los Angeles (UCLA)

This research brief finds the dramatic increase of double segregation by both race and poverty for the nation's schools.

As the anniversary of Brown v. Board of Education decision arrives again without any major initiatives to mitigate spreading and deepening segregation in our nation's schools, the Civil Rights Project adds to a growing national discussion with a research brief drawn from a much broader study of school segregation to be published in September 2016.  Since 1970, the public school enrollment has increased in size and transformed in racial composition. Intensely segregated nonwhite schools with zero to 10% white enrollment have more than tripled in this most recent 25-year period for which we have data, a period deeply influenced by major Supreme Court decisions (spanning from 1991 to 2007) that limited desegregation policy.  At the same time, the extreme isolation of white students in schools with 0 to 10% nonwhite students has declined by half as the share of white students has dropped sharply.
This brief shows states where racial segregation has become most extreme for Latinos and blacks and discusses some of the reasons for wide variations among states. We call the country's attention to the striking rise in double segregation by race and poverty for African American and Latino students who are concentrated in schools that rarely attain the successful outcomes typical of middle class schools with largely white and Asian student populations.  We show the obvious importance of confronting these issues given the strong relationship between racial and economic segregation and inferior educational opportunities clearly demonstrated in research over many decades...
Green Olive Tours - Ethiopia Sport & Culture Tour
Dear Portside,
Green Olive keeps growing. Why Ethiopia you might ask? Several reasons. There's an ancient connection between Ethiopia and our base in Palestine/Israel. The Bible/Torah tells us that the Queen of Sheba visited King Solomon and inaugurated an golden era of trade and migration of populations. To this day many Ethiopians practice a form of the ancient Hebrew religion which formed the root of the Ethiopian Orthodox Christian Church.
Like Israel/Palestine, Ethiopia is a country in flux, with its share of tragedies. While Ethiopia has the fastest growing economy in Africa large areas of the country suffers from severe drought with crop failures and millions of people under threat of starvation.
Our tours in Ethiopia will include volunteer opportunities and giving back to the communities we visit. Join us for an Ethiopian adventure. Details below
In Peace,
Fred Schlomka, CEO 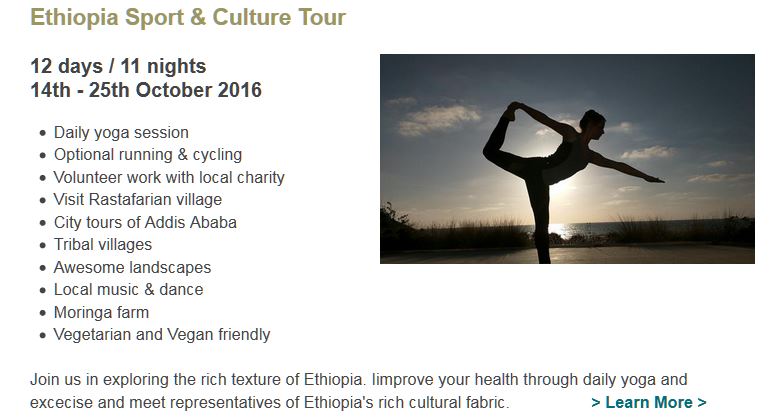