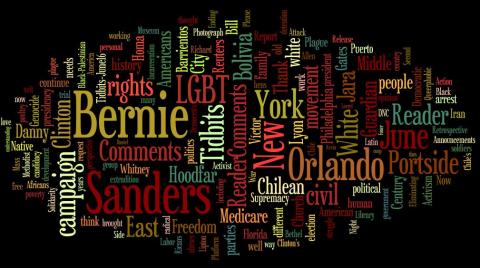 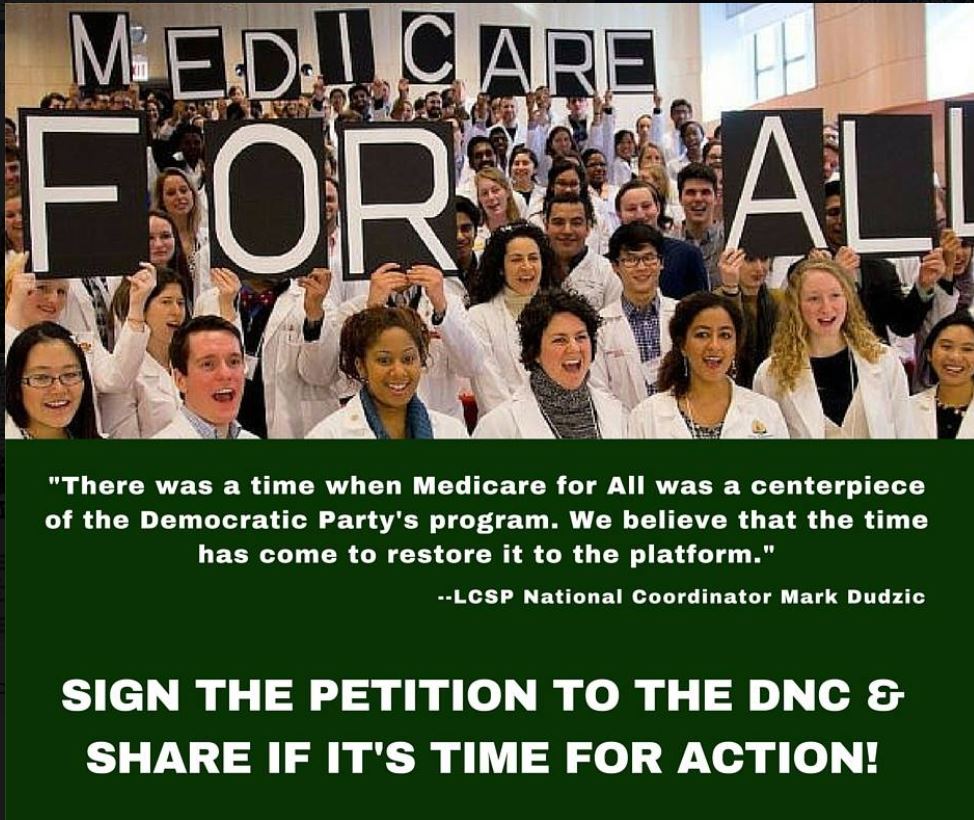 The Labor Campaign for Single Payer submitted testimony to the DNC Platform Committee asking that Medicare for All be included in the 2016 Democratic National Platform.
The labor movement is nearly unanimous in its support of Medicare for All. 53% of all Americans and 81% of Democrats believe that we need it. Please act today to urge the DNC (Democratic Party) to include Medicare for All in their 2016 Platform. Click here to sign petition.
Release Homa Hoodfar
We are deeply concerned by the arrest and ongoing detention of Homa Hoodfar, an eminent anthropologist and contributor to Middle East Report, by the Revolutionary Guard Corps of the Islamic Republic of Iran.
Hoodfar traveled to Iran in early 2016 to visit family and conduct scholarly research. She was scheduled to depart the country on March 10, but on the preceding evening Revolutionary Guards officers went to her home and confiscated her passport, as well as her personal computer, cellular phone and other items. Since mid-March she has been repeatedly interrogated, apparently with the aim of tying her scholarly work and research to political activity of which the state disapproves.
Hoodfar was arrested on June 6 after being summoned for still another interrogation. She is being held incommunicado and without charge in Evin prison in Tehran. Neither her lawyer nor her family have been permitted to see her since her arrest, nor have they been given any reason why she is being detained. More worrisome is that Hoodfar's family has not been allowed to give her the medication she needs to treat a chronic neurological condition. 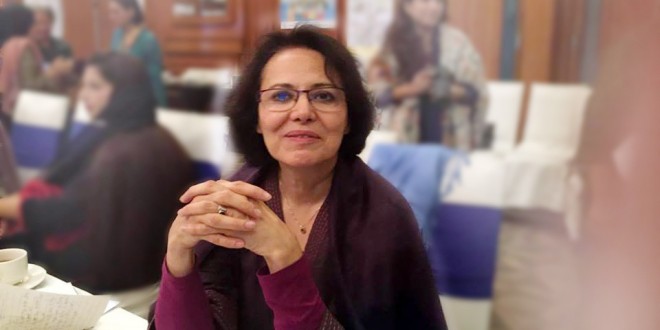 Hoodfar is a professor of anthropology at Concordia University in Montreal. She is a specialist in gender issues, including reproductive rights, family law and the role of women in politics, as well as the intersections of gender with development and public health. She has written for Middle East Report on such subjects on three occasions.
Homa Hoodfar's arrest and detention are a violation of the rights to freedom of thought, opinion and speech guaranteed in the International Covenant on Civil and Political Rights, to which the Islamic Republic of Iran is a signatory. We join Amnesty International, the Committee on Academic Freedom of the Middle East Studies Association and other organizations in calling for her prompt, unconditional release and the immediate return of her passport and personal effects.
Middle East Report Online is a free service of the Middle East Research and Information Project (MERIP).
Chilean ex-Lieutenant Faces US Trial in Murder of Singer and Activist Víctor Jara
Reuters in Santiago
June 2, 2016
The Guardian (UK)
US has not acted on Chile's extradition request but human rights group has brought a civil suit against Pedro Pablo Barrientos Núñez, who lives in Florida 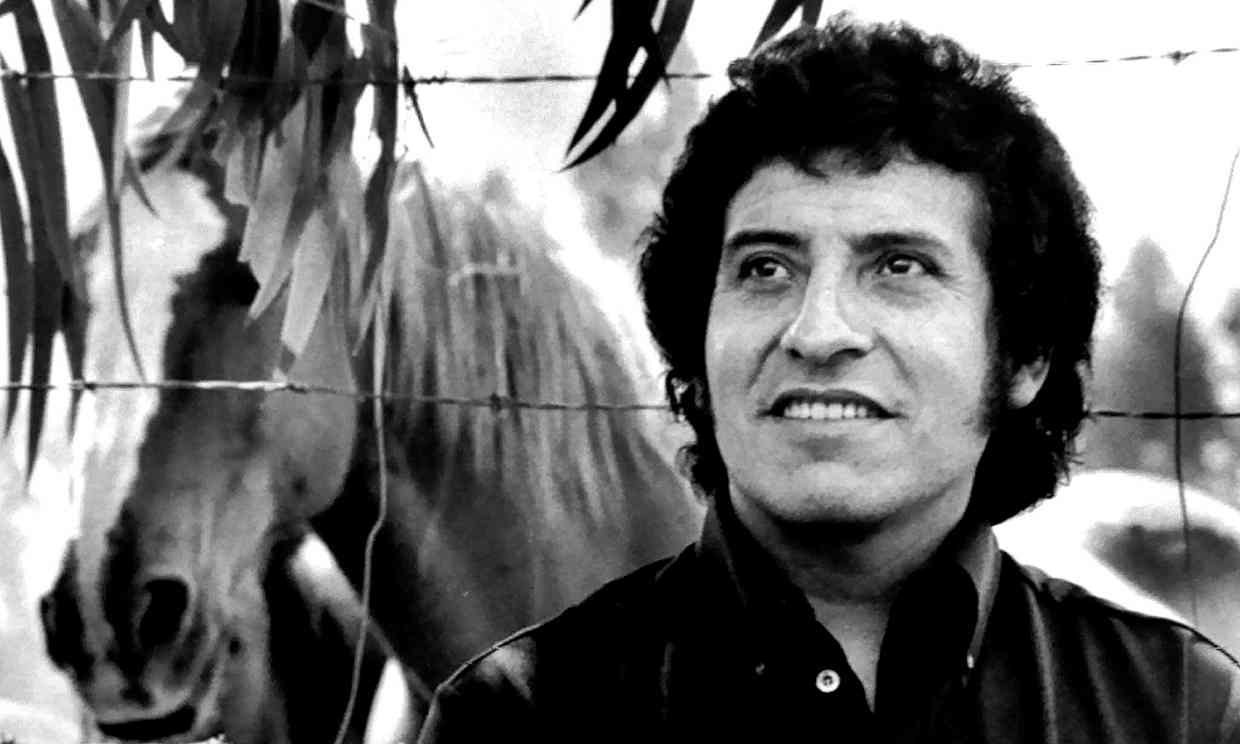 Víctor Jara was murdered in 1973.
Photograph: Fundacion Victor Jara, Antonio L/AP // The Guardian
A former lieutenant in the Chilean army under Augusto Pinochet will face a civil trial in Florida this month for his involvement in the 1973 murder of Chilean folk singer Víctor Jara, according to the US human rights group bringing the suit.
Jara, also a poet and political activist, inspired generations of artists from U2 to Bruce Springsteen with his lyrical odes to the working class. A communist, he fell afoul of the Chilean government when the leftist president Salvador Allende was overthrown by rightwing Pinochet in a bloody 1973 military coup.
During Pinochet's rule, which lasted until 1990, an estimated 3,200 people were killed and 28,000 tortured by the state. According to Chilean court documents, Jara was shot dead by soldiers in Santiago's Estadio Chile, which served as a mass detention and torture center in the early days the military government. His death soon became a potent symbol of the era's abuses.
A high-ranking official was arrested for his involvement in the murder in 2008, and in 2012 a Chilean judge ordered the arrest of an additional eight soldiers.
But one of those soldiers, Pedro Pablo Barrientos Núñez lives in Deltona, Florida, rather than Chile, and the United States has not acted on Chile's extradition request.
In 2013, the Center for Justice and Accountability (CJA), an organization dedicated to preventing severe human rights abuses, filed a civil suit against Barrientos on behalf of Jara's widow and daughters. The trial is set to take place in the district court in Orlando from June 13 to 29, the group said on Thursday.
According to the organization, a jury will be asked to find Barrientos legally responsible and will be asked to award punitive and compensatory damages.
"We stand by allegations that he was the one who tortured and murdered Víctor Jara, or at the very least he aided and abetted in his death, and in either case he is liable for what happened," the CJA's executive director, Dixon Osburn, told Reuters.
Osburn added that the CJA hoped the civil trial will push US authorities to act on Chile's extradition request, and will shed light on the abuses that took place in the Estadio Chile in the days after the coup.
Legal representatives for Barrientos could not be immediately reached for comment.
Cluck You: Bolivia Rejects Bill Gates' Donation of Hens
Reuters in La Paz
June 15, 2016
The Guardian (UK)
`Respectfully, he should stop talking about Bolivia,' development minister said about billionaire's offer despite South American nation's thriving poultry sector 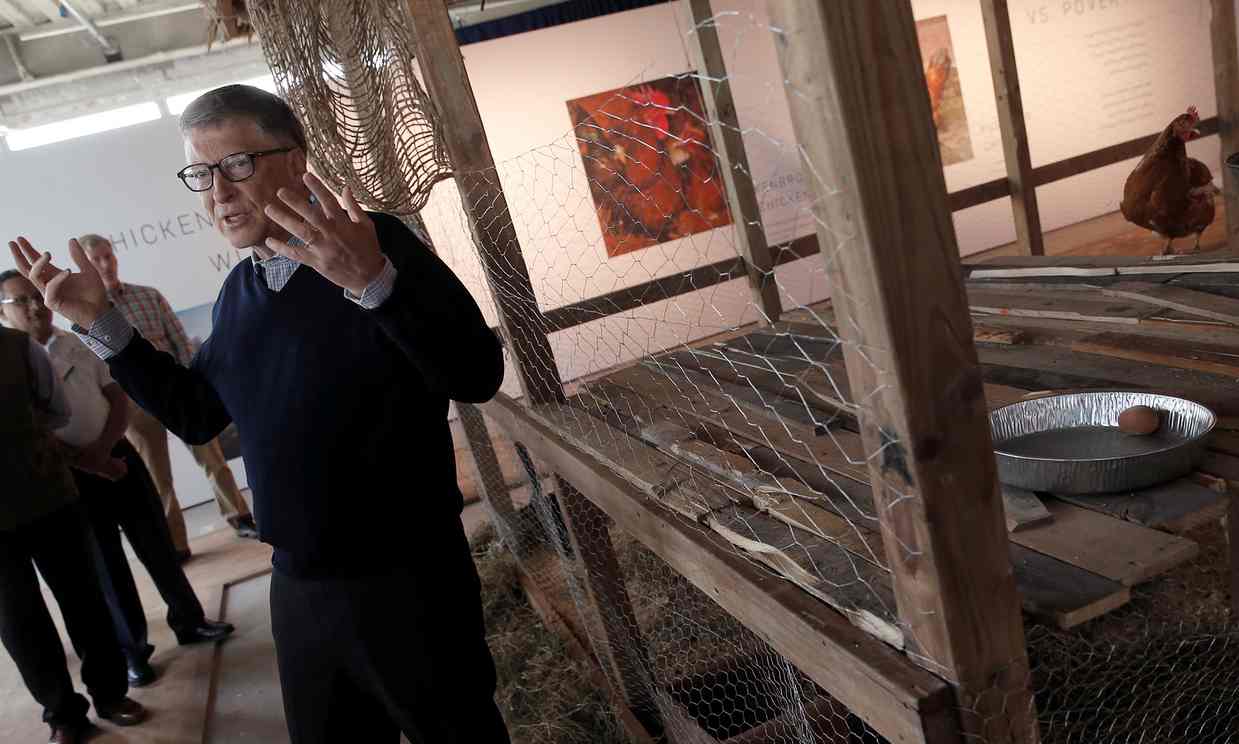 Microsoft founder and philanthropist Bill Gates said he would donate 100,000 hens to countries with high poverty levels, including Bolivia.
Photograph: Mike Segar/Reuters // The Guardian
The Bolivian government has rejected a donation of hens offered by the US billionaire Bill Gates, as officials said the tech magnate needs to study up on the Andean nation's thriving poultry sector.
"How can he think we are living 500 years ago, in the middle of the jungle not knowing how to produce?" the Bolivian development minister, César Cocarico, told journalists. "Respectfully, he should stop talking about Bolivia."
The Microsoft founder and philanthropist recently said he would donate 100,000 hens to countries with high poverty levels, mostly in sub-Saharan Africa but including Bolivia.
Bolivia produces 197m chickens annually and has the capacity to export 36m, the local poultry producing association said.
The Whitney Launches Major Retrospective of Danny Lyon - in Pictures - New York - June 17 - September 25 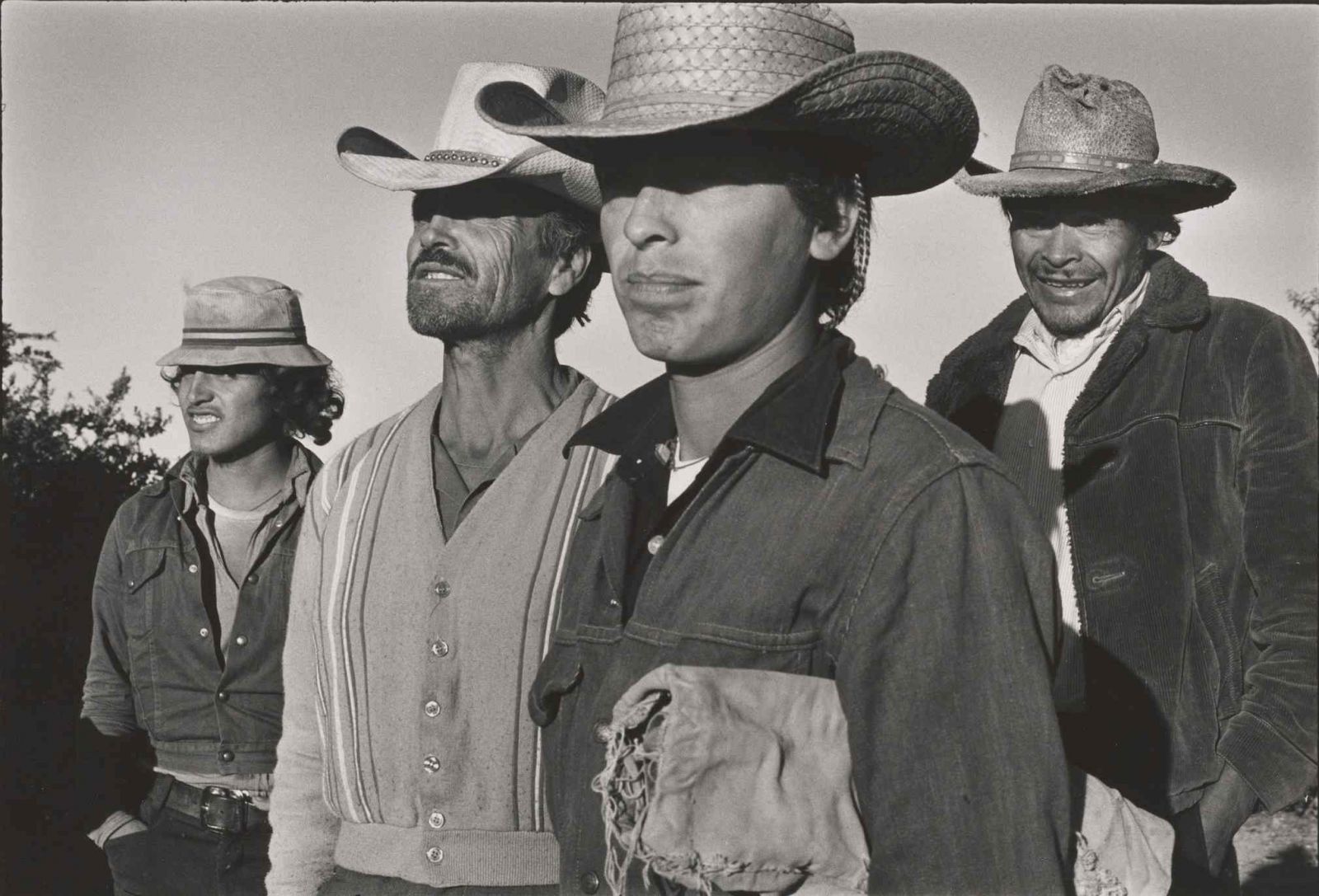 Maricopa County, Arizona, 1977
Photograph: c Danny Lyon, courtesy Edwynn Houk Gallery, New York
Photographer Danny Lyon has long been concerned with social and political change - with some of his greatest subjects being bikers, prisoners and the civil rights movement. The first comprehensive retrospective of his work in 25 years features more than 175 images. Danny Lyon: Message to the Future opens at the Whitney Museum of American Art on 17 June and runs until 25 September
Announcement from The Guardian
Memoirs of Activism from 1930s Spain to New York Today - New York City - June 22

Join us for a conversation with Eunice Lipton http://eunicelipton.com/ as she discusses her recently released family memoir, A Distant Heartbeat: A War, a Disappearance, and a Family's Secrets, which explores her Latvian-born uncle's path from Europe to the Bronx and then back across the Atlantic when he joined the Abraham Lincoln Brigade in the Spanish Civil War. Though Lipton never met her uncle, her tracing of his radical politics in New York shows how history can both haunt and mobilize families over generations.
This program accompanies our exhibition Activist New York.
Wednesday, June 22 at 6:30 pm
Museum of the City of New York
1220 Fifth Avenue, NY, NY 10029
212.534.1672
Free for Museum members; $12 for seniors and students; $16 for adults