Reader Comments: Not a Revolution - Yet; Hamilton; Enabling Neo-Fascists; Slavery, Democracy, the Electoral College; Understanding the U.S. Working Class; This Was Not a Working Class Revolt; Remembering Tony Mazzocchi; Social Security is NOT Going Broke; Labor Leaders Deserve Their Share of the Blame; Honor the Thousands of Undocumented Workers; Venezuela; Flu Shots: Facts & Fallacies; and more.. Announcement: What Happened? What Now? - Labor Forum with Bill Fletcher 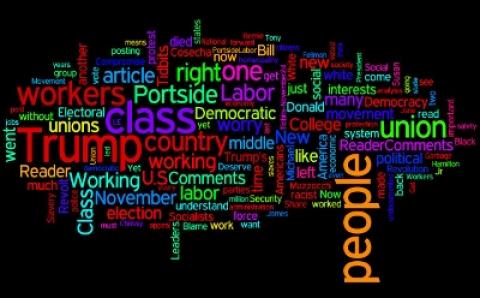 Tidbits - Reader Comments, Resources and Announcements - November 24, 2016, Portside
Announcement:
Re: Not a Revolution -- Yet
Davis starts by saying "Progressives who think they've woken up in another country should calm down, take a stiff draught, and reflect on the actual election results from the swing states."  The problem with his analysis is not his recitation of facts about who voted and why, but that there is no assessment of what the Trump ascendancy to the power of the state in the world's leading superpower really means.  Without a concrete strategy for uniting all the potentially anti Trumpists this analysis means little.
Ted Pearson
Re: ThinkProgress Will No Longer Describe Racists as `Alt-right'
Here's some back story on the repugnant phrase "alt-right." My son (Daniel Jordan, III, I'm the "Jr.") is pursuing a PhD at the University of Cambridge in England on the rise of Fascism in Franco's Spain. He pointed out that the term "alt-right" has a hidden meaning:
"Altreich - old state or old country; term used after the annexation of Austria in 1938 to refer to that part of Germany that was within the 1937 (pre-annexation) boundaries." It seems to me this is not a coincidence considering that the so called 'alt right' has already expressed a superficial understanding of Nazi terminology.
It seems too much a coincidence that they came up with "alt-right" without it being tied to the German phrase. This fits with the LA Times article on the code language of these Neo-Nazis.
http://www.latimes.com/nation/la-na-pol-alt-right-terminology-20161115-…
Daniel Jordan (Jr.), PhD, ABPP
====
Shame shame on the NYT.
Deborah Nagle-Burks
Former CBS, ABC Radio USA reporter
Re: Trump Demands Apology from Hamilton Cast After Mike Pence Booed
Trump...not only do some people not love you....some people HATE you and your sexist, fascist, gay-hater Veep. You don't have the power to demand an apology and if you start using the office of the President to punish people who don't like you....well that's the damn end of the line, isn't it?
John G. Hertzler
Posted on Portside's Facebook page
====
The cast has to apologize because of the audience? If Trump thinks this is bad, he ain't seen nothing yet.
Jerome Conner
Posted on Portside's Facebook page
====
Trump Wants An Apology From Hamilton. Chrissy Teigen's Response Is Perfect
Model and entrepreneur Chrissy Teigen, wife of music icon John Legend, vented her frustration in a tweet that perfectly nailed how the vast majority of the American people feels about the situation. 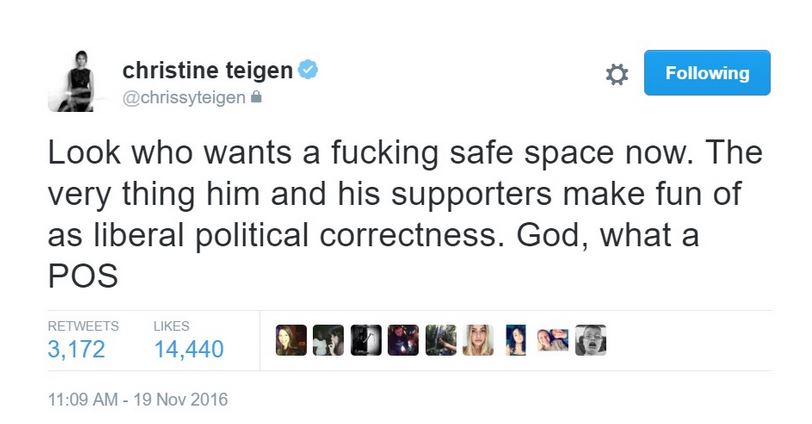 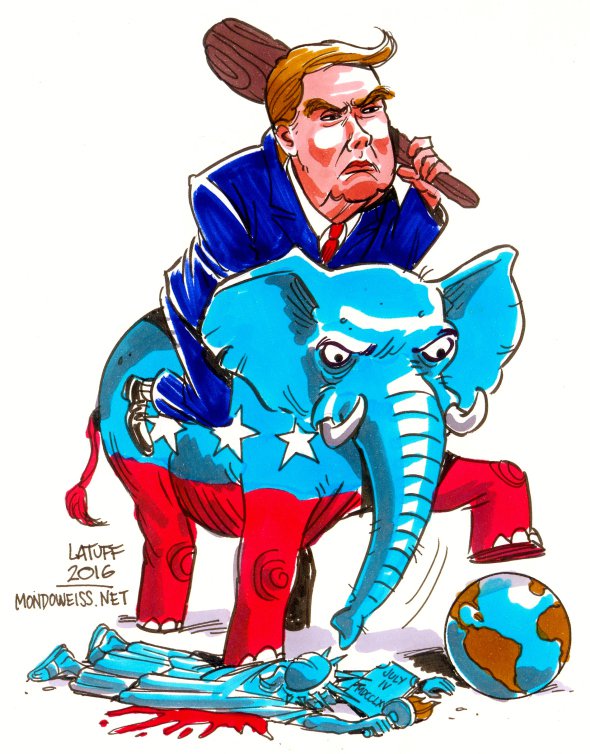 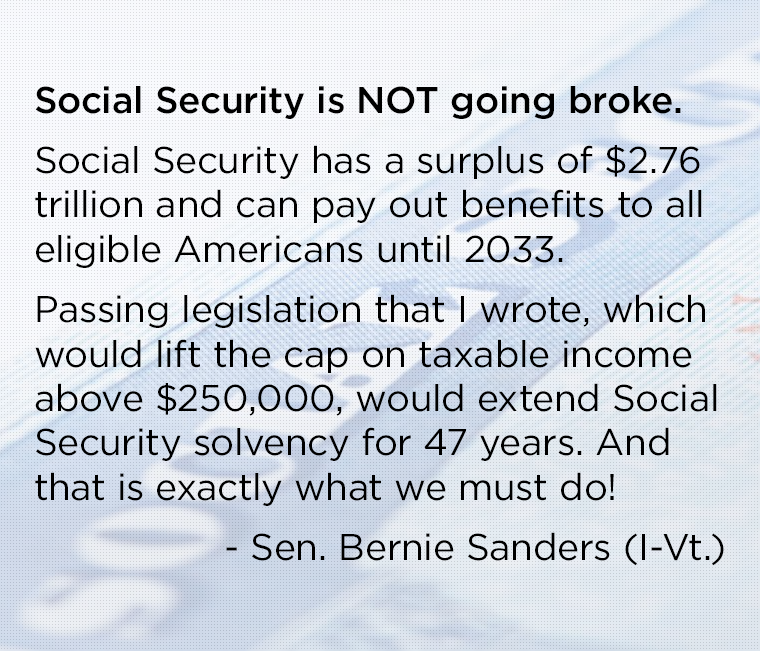 We are Cosecha.
The name is to honor the thousands of undocumented workers that provide food to our many tables today and for the legacy of the millions of workers that were forced to become slaves to provide for the accumulation in this country.
We are a movement fighting for permanent protection, dignity and respect for the 11 million undocumented immigrants in the United States.
It has been over a decade since the Mega Marches of 2006 - and in the past 10 years, many attempts to pass "bipartisan commonsense comprehensive immigration reform" have come and gone. We have gotten on buses to march when they said to march and told our cousins to vote when they told us it was time to vote. And yet - time and again, the political parties, the presidents we've elected, and D.C. lobbyists representing our interests have failed to deliver on the promise they have made to our community for the past 20 years.
After so much sacrifice, pain, trauma, and hard work, we think it is time for our community to try something new. Sustained mass non-cooperation. Widespread boycotts. A general strike.
We learned that the hardships we face - the raids, the separation, the deportations, the exploitation - continue because we allow them to. We cooperate with these atrocities when we spend our money and when we work hard without meaningful pay. Our power lies in our bodies that are made invisible, but provide so much sustenance to this country. So it is time to ask - what would a day without immigrants really look like? What would a week without restaurant workers feel like? This country would have to choose between continuing to exploit workers and separate families, or finally coming to terms with our racist history and giving us the protection, the dignity, and the respect we demand.
We are students of the thousands of farmworkers that stood up to the exploitation with the leadership of Dolores Huerta, Larry Itliong and Cesar Chavez, and students of the thousands of African-Americans that stood up to the racist Jim Crow system all over this country. We come from cultures that have a rich tradition of popular struggle and movement building. Along with so much else, we bring these stories of resistance to the U.S. when we migrate. They live in each of our communities.
We are fighting for a new day of justice, reconciliation and unity for our immigrant and undocumented communities. We are fighting for permanent protection, dignity, and respect.
Will you join us?
JOIN THE MOVEMENT
Re: Venezuela: Economic War or Government Errors?
To reduce the collapse of Venezuela's economy to a neo-liberal capitalist reactionary plot" is not only inaccurate, but short-sighted in extreme! All the VERY REAL plots and machinations of the right would not have the impact that we see today if the Maduro administration had not allowed government corruption, economic incompetence and political inflexibility to guide his response to the crisis. The Bolivarian revolution is in danger of being reversed once Maduro is no longer President, because even among the working classes, recognition of its accomplishments is being replaced with disgust with its failures.
Francisco Gonzalez
Posted on Portside's Facebook page
Re: Flu Shots: Facts & Fallacies
pro vaccine, but soberly so. Is this all wrong?
Steve Meacham
====
Please read the following short article written by an MD who uses homeopathy in her practice.
Most MDs are pretty conservative people and so is this article so it should carry some weight with you. This is a current response by an MD to an article that was similar in intent to the one you recently posted.
Given your horrifically biased and totally inaccurate article last week by a quack you need to avail yourself of the opposite point of view.  I will add, people who have benefited from homeopathy are not deluded.  The Swiss study on homeopathy concluded that patient satisfaction was so high they would include homeopathy in their national health program.
tanya marquette
new paltz, ny
Dear Americans,
I understand some of you are very worried about the election of Donald Trump. But I want you think about this:
First they went for Yugoslavia, and you didn't worry: a country died
Then they went for Afghanistan and you didn't worry: 220,000 Afghans have died.
Then, they went for Iraq, and you didn't worry: 1 million Iraqis died.
Then they went for Libya, and you didn't worry: 30,000 to 50,000 people died. Did you worry when Qaddafi was murdered with a bayonet up his rectum? No. And someone even laughed.
Then they went for Ukraine, and you didn't worry: 10,000 people died and are dying.
Then they went for Syria, and you didn't worry: 250,000 people died
Then they went for Yemen: over 6,000 Yemenis have been killed and another 27,000 wounded. According to the UN, most of them are civilians. Ten million Yemenis don't have enough to eat, and 13 million have no access to clean water. Yemen is highly dependent on imported food, but a U.S.-Saudi blockade has choked off most imports. The war is ongoing.
Then there is Somalia , and you don't worry
Then there are the countries that reaped the fallout from the collapse of Libya. Weapons looted after the fall of Gaddafi fuel the wars in Mali, Niger, and the Central African Republic.
Now you are worried about yourselves, but there are only the dead and their survivors left for whom you didn't speak up for.
Give me one reason why anybody should worry about you, who seem to believe that only you count because you are Americans.
My very best wishes for your precious safety and comfort and may you continue to look in the mirror and see no one there.
Trust me, a mirror does not lie.
Sincerely,
One who does not worry about you.
(A reader in Belgium)
What Happened? What Now? - Labor Forum with Bill Fletcher, Jr - New York - December 20 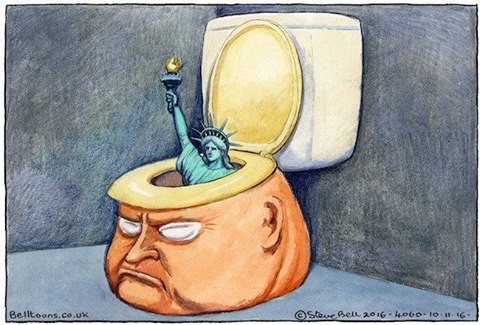