Reader Comments: We Remember - May 4, 1970; New Korean War?; Where is the Peace Movement; Pre-Existing Conditions; March on McDonald's May 23; Boycotts; Workers; Luddites; Marine Le Pen; California Single-Payer; Responses to Culture posts - Identity Politics; Picasso's Guernica; The Zookeeper's Wife; The Immortal Life of Henrietta Lacks; Lunch and Bologna; Donna Leon; The Handmaid's Tale; KNOW YOUR RIGHTS: What To Do If You're Stopped; The European Left; and more... 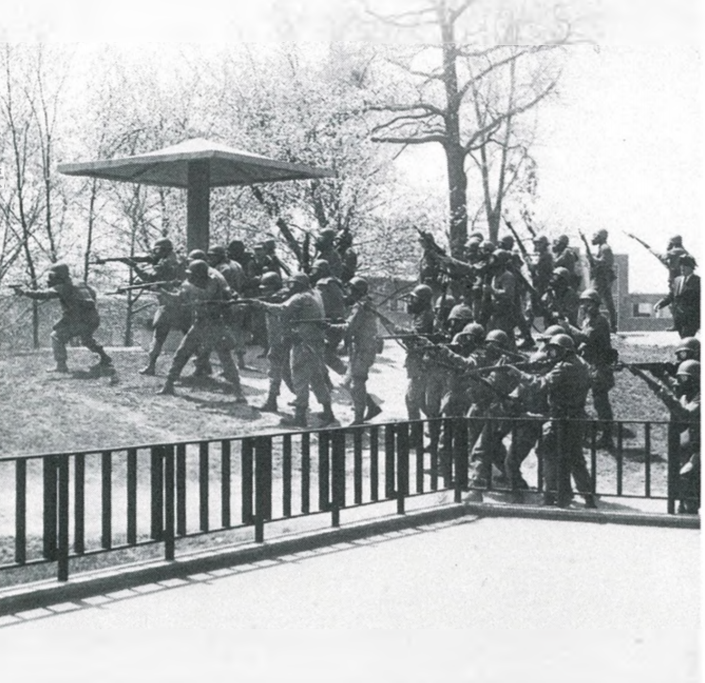 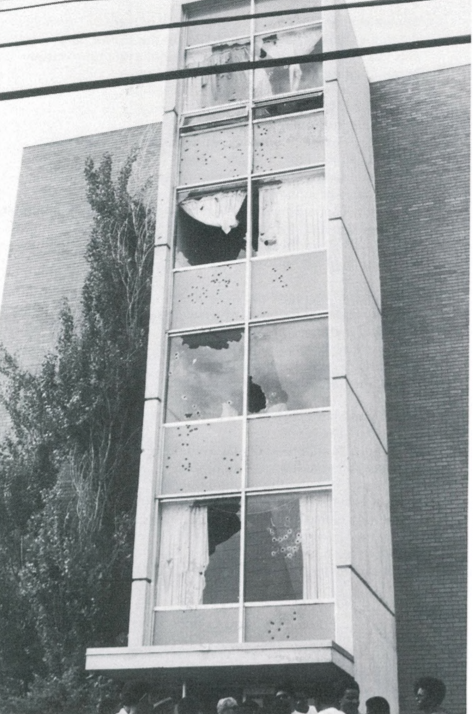 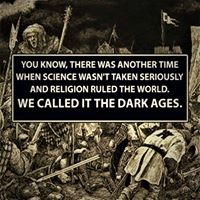 Maria M Fadli
Posted on Portside's Facebook page
Pre-Existing - Cartoon by Rob Rogers
The GOP's obsession with repealing Obamacare at all costs is costing the people who need it the most. Yes, changes are needed to improve coverage, affordability and access. Repealing it would be a disaster. 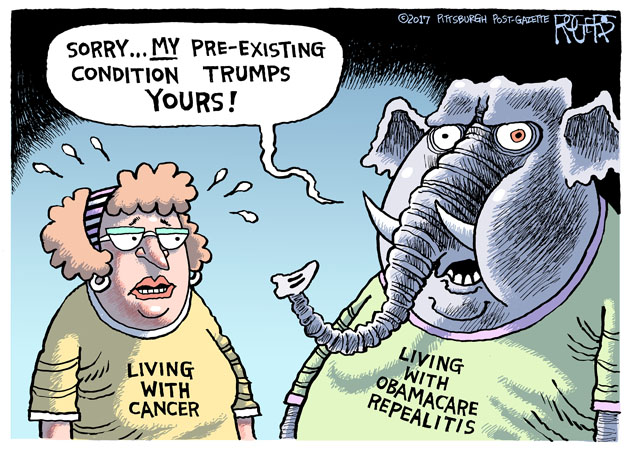 Rob Rogers
April 30, 2017
Pittsburgh Post-Gazette - Staff Blogs
Re: Report Prompts Warnings That the Polar Region Is 'Unravelling'
From the NSICD. The average annual Arctic temperature is -24C, so the +3 increase will simply put it at -21C. How much ice melts at -21C. If you want to be credible, do some research, apply some logic, before posting a "OMG" moment. "The Arctic or the Earth's Northern Polar Region has pretty extreme weather!
Okay, so you know the Arctic is cold, right? But did you know that minimum temperatures of -90°Fahrenheit (-68° Celsius) can be reached in Greenland and northern Siberia during winter months?!? That's pretty cold! Now it's not that cold all the time all over the Arctic. The average Arctic winter temperature is -30° F (-34°C), while the average Arctic summer temperature is 37-54° F (3-12° C)"
Peter Thompson
Posted on Portside's Facebook page
====
University of V[ancouver] is studying emerging forests from retreating glacier in BC. These forests are 2000 or so years old. Portside please explain why these forests were covered by ice and why are the emerging today.
Norman Mckenzie
Posted on Portside's Facebook page
MARCH on McDonald's 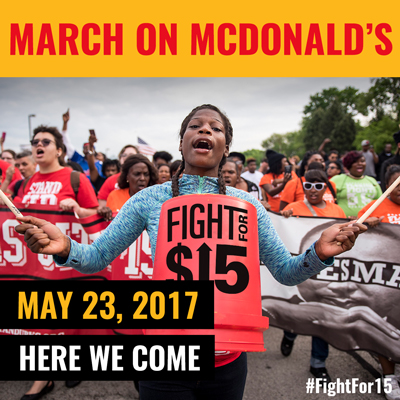 We rely on the police to keep us safe and treat us all fairly, regardless of race, ethnicity, national origin or religion. This card provides tips for interacting with police and understanding your rights.
This information is not intended as legal advice.
DOWNLOAD A PRINTABLE VERSION (IN ENGLISH AND OTHER LANGUAGES)
Justice is within your reach. 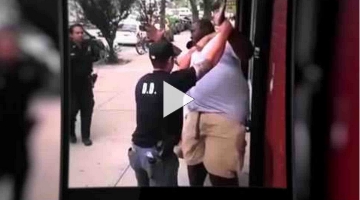 Take the ACLU on the go, for free. Download the Mobile Justice app now on your iOS or Android device.
A Window Into The European Left
For 15 years now a group of scholars, party functionaries and activists (many participants are in all three of these categories) have carried out research that speaks to the needs and interests of the movements of the European Left. They are associated with such institutions as the Nicos Poulantzas Institute in Greece, Espaces Marx in France, and the Rosa Luxemburg Foundation in Germany, as well as newer national transform! organizations from Norway and Hungary, Italy and Moldavia, among other nations.
They form a network for alternative thinking and political dialog supportive of the foundation of the Party of the European Left, which brings together parties to the left of social democracy — such as Die LINKE, Izquierda Unida, Syriza, the Dutch Socialist Party, and the French Communist Party. The network engages both social movements and the political parties to the left of the centerleft, and is serious about both the electoral process and activism in the streets. Its reports and debates should be of value to everyone on the left interested in events and struggles in Europe. In a short review it is not possible to engage the contributions, but only to give the readers a sense of the book’s broad coverage.
I do think that while readers will find things to criticize — how could they not in such ambitious essays? — the overall reaction will be a learning experience and a good deal of nourishing food for thought.
The 2016 transform! yearbook is an excellent introduction.
The Enigma of Europe: Transform!
edited by Walter Baier, Eric Canepa and Eva Himmelstoss
Paper, £16.95 ($23.95)
London: Merlin Press, 296 pages
September 1, 2016
ISBN-10: 0850367212
ISBN-13: 978-0850367218
transform! — the very name (and the exclamation point) — suggest the perennial questions: What is to be done?, and: Who is to do it? The authors share both a commitment to socialism and an understanding that in the contemporary conjuncture more than at any time since the 1930s we do not have a stable form of capitalism, although there are no acute symptoms of collapse.
Bill Tabb,
Science & Society, Vol. 81, No. 2, April 2016, 282–287
Thanks to the author for sending his review to Portside. Thanks to the editor of Science and Society for permission for Portside to re-post.
Book Talk: Blanche Wiesen Cook on Eleanor Roosevelt - New York - May 9
Blanche Wiesen Cook will discuss her new book Eleanor Roosevelt, Volume 3: The War Years and After, 1939-1962 (Penguin Books, 2016) on Tuesday, May 9 (6:00 PM) at the Tamiment Library. A reception with wine and cheese will follow the lecture. This event is co-sponsored by the Frederic Ewen Center and the New York Labor History Association.
Tuesday, May 9 (6:00 PM)
Tamiment Library & Robert F. Wagner Labor Archives
70 Washington Square South
10th Floor
New York, NY 10012 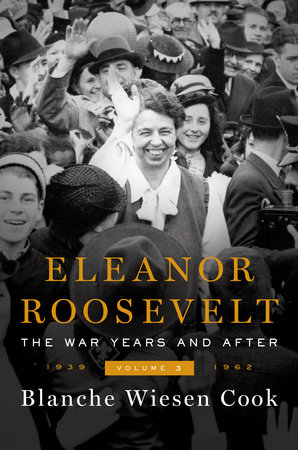 BLANCHE WIESEN COOK is a distinguished professor of history at John Jay College and Graduate Center, City University of New York. In addition to her biography of Eleanor Roosevelt, her other books include The Declassified Eisenhower and Crystal Eastman on Women and Revolution. She was featured on air in Ken Burns's recent documentary, The Roosevelts.
Copies of Eleanor Roosevelt, Volume 3 will be available for purchase.
RSVP: email tamiment.events@nyu.edu with guest name(s) & event title.
Refugee Solidarity - Webinar Reportback from a Diaspora Delegation to Greece - New York - May 10
Join us, as WRL hosts a reportback from members of the Iraqi Transnational Collective (ITC), recently returned from working with refugees in Athens, Greece. Learn about the remarkable groups ITC collaborated with, the ways refugee communities are supporting each other in the face of war trauma and harsh criminalization, and discuss the role diasporas and campaigning can play to build solidarity across closed borders.
Wednesday evening, May 10th, 5:00 PST/7:00 CST/8:00 EST
REGISTER FOR THE WEBINAR HERE
Speakers:
Subscribe to Portside