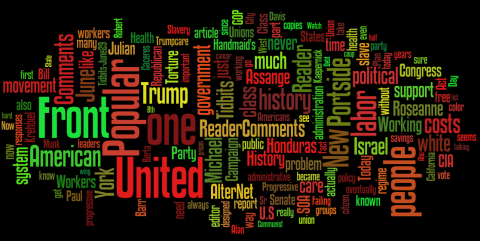 Tidbits - Reader Comments, Resources and Announcements - June 29, 2017, Portside
Resources:
Job Announcement:
Re: Rigged, Forced into Debt, Worked Past Exhaustion, Left with Nothing
Just another American form of slave labor. Can you guess which party the trucking company executives vote for?
Ken Hinton
Posted on Portside's Facebook page
====
The American corporate slave..... gonna be hell to be paid when they eventually figure it out...
Robert Berkemer
Posted on Portside's Facebook page
====
This and minimum wage slave labor are nothing new. Thanks to T-Rump it may only get worse. Heaven forbid anyone managing on slave minimum wages ever gets sick. Get used to the homeless. They're coming to a neighborhood near you.
Rebecca Hancock
Posted on Portside's Facebook page
Re: “This Is Red Alert”: Inside the Left's Game Plan for Beating the GOP Health Bill
HELP--TRUMPCARE COULD PASS IN SENATE--DISASTER
..
Traitor McConnell just invoked Senate Rule 14, which allows TrumpCare to bypass committee and without debate go straight to a floor vote.
No committee debates and no public hearings, mean that we, and most likely many Senators will know very little about what's actually in the bill when it gets voted on (just like the House).
If McConnell has his way, the bill will be voted on by July 4th, before Congress goes into August recess.
We need to make sure at least 4 Republican Senators are a solid NO vote.
Whip list below!
1. CALL these Republican Senators below if they represent you and pass on to family and friends in these states:
Probably A No Vote
Lisa Murkowski (AK) 202-224-6665
Susan Collins (ME) 202-224-2523
On the Fence
Dean Heller (NV) 202-224-6244
Jeff Flake (AZ) 202-224-4521
Wild Cards
Ted Cruz (TX) 202-224-5922
Mike Lee (UT) 202-224-5444
Rand Paul (KY) 202-224-4343
2. CALL your Senator even if not mentioned above, Democrat and Republican alike. We need to get back to making noise about the AHCA!
1-844-6-RESIST
1-844-673-7478
Neil Alan Bufler
Posted on Portside's Facebook page
==== 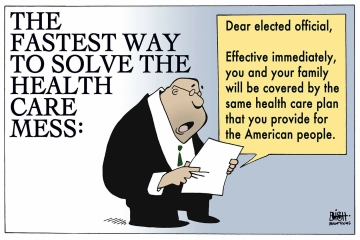 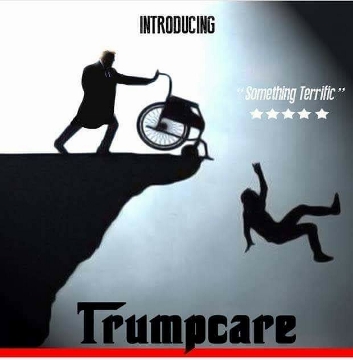 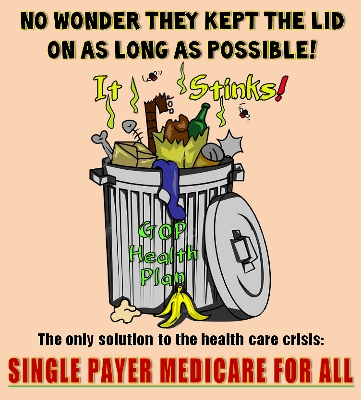 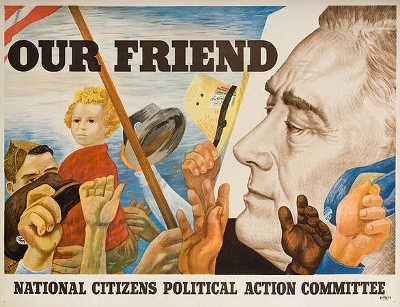 Our Friend, 1944 poster by Ben Shahn (1898 - 1969) for the National Citizens Political Action Committee (PAC) an arm of the Congress of Industrial Organizations (CIO), urging people to "register and vote." It was published to elect a progressive president and congress in 1944 - specifically to help propel Franklin Roosevelt into an unprecedented 4th term.
Two years later, a photographer noticed a copy still displayed on a NYC storefront 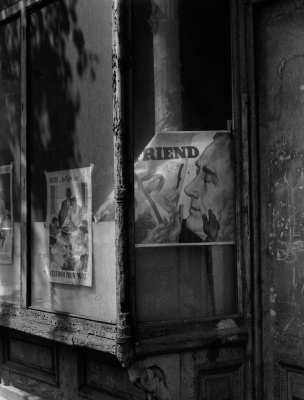 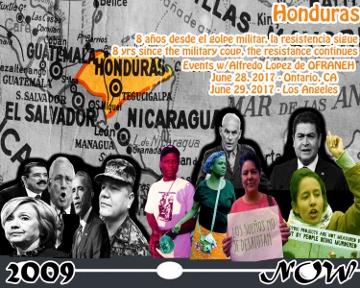 Today marks the 8th anniversary of the US-backed military coup in Honduras. Since June 28 2009, the post-coup regime has been maintaining a system of oppression and violence reflected in the blatant disregard for human rights that has led to the death of at least 113 environmental activists, including the feminist and indigenous leader Berta Cáceres, the internal displacement of more than 174,000 people, and the forced migration of thousands more.
Today, as the Honduran regime continues to arm itself with weapons and training provided by the US government, we cannot forget that four out of the six generals officially linked to the orchestration of the coup were trained at the School of the Americas (SOA, renamed the Western Hemisphere Institute for Security Cooperation, WHINSEC). They are Generals Romeo Vásquez Velásquez, Luis Prince Suazo, Miguel Angel García and Carlos Cuellar. The leadership of SOA graduates in the coup follows a pattern of anti-democratic actions by graduates of the SOA .
Today we demand justice for Berta Cáceres and the thousands of people assassinated or forcibly displaced as a consequence of the post-coup regime and the US military, economic and political intervention in Honduras. On this anniversary, join Berta's family in calling for the Berta Cáceres Act, HR 1299! Write to your Member of Congress by clicking here. continue with the week of action by engaging with communities that are important to you, to help build awareness about the ongoing violence in Honduras and ensure their support for the Berta Cáceres Act. Begin organizing your faith community, labor union, or other community organization so that they add their name to the list of hundreds of endorsers, big and small, to this important bill.
SOA Watch
733 Euclid Street NW
Washington, DC 20001
phone: 202-234-3440
email: info@soaw.org
Will Trump Erase History of CIA Torture?? Poster of the Week 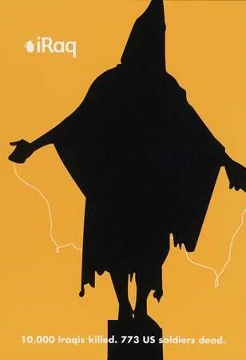 iRaq [Abu Ghraib prisoner]
Forkscrew Graphics
Silkscreen, 2004
Los Angeles, CA
22001
Is the Trump administration attempting to erase history? Last Friday, congressional officials confirmed the administration has begun returning to Congress copies of the Senate's explosive 2014 report on CIA torture. The move raises concerns that copies of the classified report will now be buried in Senate vaults or even destroyed-and, along with it, lessons from one of the darkest chapters in America's history. Under the Obama administration, the 6,770-page landmark investigative Senate report was initially sent to federal agencies in hopes it would eventually be made public. Now the reports will be returned to the Republican-controlled Senate. Documents held by Congress are not subjected to laws requiring government records to be eventually made public. Democrats are expressing fear that the Trump administration intends to erase electronic copies and destroy hard copies of the report.
To read highlights of the report and the current attempt to destroy it go to:
CSPG's Poster of the Week combines the infamous photograph of a prisoner tortured in Abu Ghraib, the U.S. run prison in Iraq, with the internationally distributed iPod ad.
Photographs of the torture, abuse and humiliation of Iraqi prisoners by U.S. military personnel, were first seen by the U.S. public in April 2004. Seymour Hersh, the same journalist who exposed the My Lai Massacre during the Viet Nam war, also exposed the torture of Iraqi prisoners in Abu Ghraib prison.
The Apple ads used dancing silhouettes with white wires against a flat brightly colored background to promote the iPod, a pocket-sized device for playing music files. Artists soon merged the horrific Abu Ghraib hooded man with electric wires hanging from his fingers, with the now iconic iPod ad.  The two earliest and best known versions were Copper Greene from New York and Fork Screw Graphics from Los Angeles, both of whom inserted their anti-war graphics into displays of the real ads, provoking viewers to do a double take when passing by.
This is a very effective form of culture jamming-once someone sees the parody or politicized version, they can rarely see the real advertisement without thinking of the politicized one. 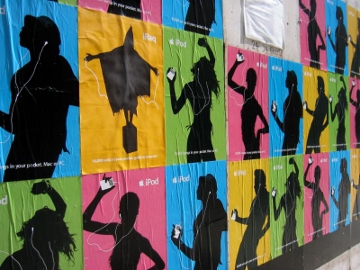 Job description is below. Please send your cover letter and resume to editjobs@alternet.org.  AlterNet Seeks Experienced Editor Please feel free to circulate! READ MORE»
AlterNet seeks a talented and experienced (2+ years) editor to join our core team and assist in the production of feature-length essays and reported articles for our high-volume operation -- we publish 200 articles a week, about half of them original. The role has a managing editing component to it; we expect you are familiar with the terrain of the contemporary breaking news environment.
We are looking for an editor with existing relationships with freelance writers who fit AlterNet's coverage. Strong knowledge and contacts with other publications is a plus. Also important is being fast and clear with copy, having knowledge about social issues, knowing the personal is often political, and possessing an eclectic progressive worldview.
A deep background on several issues such as human rights, environment /food, culture, social change, consumer issues, and others will be a big asset. The ideal editor has a natural grabby headline writing talent, and backs that up with old school editing skills. This editor needs motivation to generate big audiences with their stories by marrying popular topics with quality content. Overly earnest is not high on the list. There will be some weekend work and the weekly schedule can have some flexibility. Pay depends on experience, but is competitive.
You will work out of our New York Office.
We seek diversity among our editorial staff and are an equal opportunity employer.
Please send your cover letter and resume to editjobs@alternet.org. It really helps your chances if you think through whether you are actually a good fit for this job, and if you take the time to explain why.