What Killed the Democratic Party?

A new report offers a bracing autopsy of the 2016 election—and lays out a plan for revitalization. 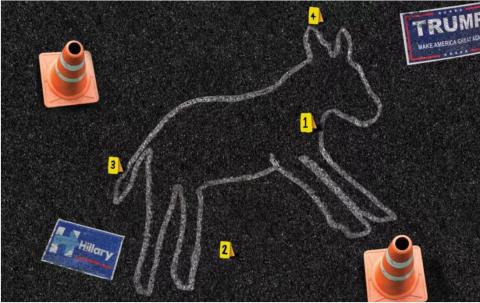 The Democratic Party lost just about everything in 2016, but so far it has offered only evasive regrets and mild apologies. Instead of acknowledging gross failure and astounding errors, the party’s leaders and campaign professionals wallowed in self-pity and righteous indignation. The true villains, they insisted, were the wily Russians and the odious Donald Trump, who together intruded on the sanctity of American democracy and tampered with the election results. Official investigations are now under way.

While the country awaits the verdict, a new and quite provocative critique has emerged from a group of left-leaning activists: They blame the Democratic Party itself for its epic defeat. Their 34-page “Autopsy: The Democratic Party in Crisis” reads more like a cold-eyed indictment than a postmortem report. It’s an unemotional dissection of why the Democrats failed so miserably, and it warns that the party must change profoundly or else remain a loser.

Reading the particulars of this critique, I had the impression that maybe the party got what it deserved in 2016. I do not mean that Trump deserved to win. Indeed, “Autopsy” mentions Trump’s campaign largely in passing, and the Russians only once. But this analysis does suggest that Trump became president mainly because the Democratic campaign was inept, misguided, smug, and out of touch with the country.

Much of the report’s specifics were already known in bits and pieces. But the evidence takes on a sharper edge and stronger punch as it is laid out in “Autopsy.” The task force that drafted the critique was led by journalist and media critic Norman Solomon, a Democratic convention delegate in 2008 and 2016; Karen Bernal, the Progressive Caucus chair of the California State Democratic Party; Pia Gallegos, a longtime civil-rights lawyer and activist in New Mexico; and Sam McCann, a New York–based communications specialist focused on issues of international justice. The writers are not promoting any candidate for 2020, though they are obviously kindred spirits with Bernie Sanders and his aggressive reform agenda. They do, however, want to provoke a showdown within the Democratic Party: the Clinton-Obama establishment versus the hurt and disappointed party base. The establishment has the money and the governing control; the rank-and-file agitators have the fire of their brave convictions.

This “Autopsy,” in other words, is a text for rebellion and a rough suggestion of what a born-again Democratic Party might look like. This is the heart of its indictment: “The mainstream Democratic story line of victims without victimizers lacks both plausibility and passion. The idea that the Democrats can somehow convince Wall Street to work on behalf of Main Street through mild chiding, rather than acting as Main Street’s champion against the wealthy, no longer resonates. We live in a time of unrest and justified cynicism toward those in power; Democrats will not win if they continue to bring a wonk knife to a populist gun fight.”

The authors are clearly seeking a straightforward repudiation of the governing strategy on economic issues by the last two Democratic presidents. Neither Bill Clinton nor Barack Obama attempted to challenge corporate and financial interests, and neither did nearly enough to address the lost jobs and wages that led to deteriorating affluence and fed popular cynicism and distrust. Obama, for example, gratuitously appointed General Electric CEO Jeffrey Immelt to the White House Jobs Council—an odd choice, given that Immelt’s company was a notorious pioneer in offshoring American jobs to foreign nations. Immelt subsequently admitted that he was motivated by GE’s bottom line: American wages were too high, he explained, so he intended to lower them. He succeeded.

“The mainstream Democratic story line of victims without victimizers lacks both plausibility and passion.” —from “Autopsy: The Democratic Party in Crisis”

In this context, blue-collar workers were not mistaken when they blamed the Democrats. During the campaign, Hillary Clinton was virtually silent on the party’s complicity. The Democratic nominee couldn’t very well quarrel with the party’s embrace of Republican dogma on free trade and financial deregulation, since it would have meant quarreling with her husband. On the central domestic issue of our time, she had nothing convincing to say. Clinton belatedly announced her opposition to the Trans-Pacific Partnership trade deal championed by President Obama, but at that point it was already dead. The party platform paid the usual respect to liberal economic causes, but who could believe her? Clinton lacked authenticity.

A revealing example cited in “Autopsy” of the Democratic Party’s self-congratulatory mentality (and its cluelessness) is the fund-raising mailer it sent to donors in the summer of 2017—eight months after its spectacular wipeout. The mailer was “designed to look like collection letters to its supporters,” the critique notes. “The DNC team scrawled ‘FINAL NOTICE’ across the envelopes and put ‘Finance Department’ as the return address. The message it conveyed, intentionally or not, was: you owe us.” The upstart critics observe: “That, not coincidentally, is a message the party leadership has been sending to core constituencies through its policies and campaign spending priorities.”

The condescending approach of party wise guys may seem a trivial matter in the era of high-tech modern elections, but politics is still personal. The failure to sustain the attachments of shared experience and kindred loyalties can be fatal. Representative Thomas “Tip” O’Neill, the Democratic House speaker during the Reagan era, used to tell this story about himself: In his first run for Congress, a family friend and neighbor, Mrs. O’Brien, told O’Neill that she would vote for him even though he had failed to ask for her vote. O’Neill was astonished. He hadn’t thought it necessary, since they were such close friends. “Tom, let me tell you something,” Mrs. O’Brien said. “People like to be asked.”

That kernel of political wisdom is what the Democratic Party has forgotten. All politics is local, as O’Neill taught. But the party moved uptown, so to speak, and lost touch with the old neighborhood. The party of working people failed to rally the stalwart regulars it could usually count on, and those folks failed to turn out in the usual numbers.

In essence, this is the core accusation leveled in “Autopsy”: that the Democratic Party neglected its most loyal voters. It not only forgot to ask for their votes; it ignored the general distress of working people (white, black, and brown). Furthermore, the party didn’t have much to offer those folks in the form of concrete proposals to improve their lives. That’s a controversial claim, but the authors of “Autopsy” offer damning evidence to support it.

“For every blue-collar Democrat we lose...we will pick up two moderate Republicans.”
—Senator Chuck Schumer, who like many Democrats fatally misjudged the electorate.

In midsummer 2016, working-class enthusiasm for Trump was the hot political story, but Senator Chuck Schumer, the soon-to-be Democratic leader in the upper chamber, assured party colleagues that they needn’t worry. “For every blue-collar Democrat we lose in western Pennsylvania, we will pick up two moderate Republicans in the suburbs of Philadelphia,” Schumer predicted. “And you can repeat that in Ohio and Illinois and Wisconsin.”

At the time, Schumer sounded as though he was just blowing smoke to motivate donors. But in hindsight, this may actually have been the party’s strategy: Bet on middle-class suburbanites offended by the vile Trump to vote Democratic or stay home, which would offset the loss of working-class voters attracted to him. If this was, in fact, the strategy, the party bet wrong on every point.

What’s more, this approach may have encouraged Democratic operatives to shortchange black and Latino voters—two faithful groups that had powerful reasons to vote against Trump. The turnout for both was depressed compared to previous presidential elections.

According to the authors of “Autopsy,” the Democrats withheld funding for grassroots canvassing and failed to challenge outrageous Republican schemes to suppress the minority vote. Albert Morales, then the Democratic National Committee’s director of engagement for Latino voters, originally proposed a $3 million budget to increase turnout in Arizona, Colorado, New Mexico, Florida, Nevada, and Texas. He ended up with $300,000. “It was just pitiful,” Morales said.

“Autopsy” warns that “what ought to deeply worry Democrats moving forward…is the massive swing of white working-class voters from Obama in 2012 to Trump in 2016 and the depressed turnout of black and Latino voters for Clinton relative to 2012 Obama…. To put it in marketing terms: the Democratic Party is failing, on a systemic level, to inspire, bring out, and get a sufficient majority of the votes of the working class.”

“As a result of these failures,” the report continues, “Democrats saw dips in voter turnout and voter support among people of color—dips that were disastrously concentrated in swing states. In short, these missteps likely cost the party the presidential election.”

Once again, people like to be asked. There is one more bloc of potential voters that the Democratic Party failed to ask—young people—and its failure here is ominous for the future. This new generation is far to the left of the current party, not to mention stone-age Republicans. Bernie Sanders was their man in 2016, and he will continue to be an influential leader in reshaping politics and the governing of the nation.

Many young people are even to the left of Bernie. A YouGov poll in January 2016 found that 43 percent of people under the age of 30 had a favorable opinion of socialism, versus just 26 percent unfavorable. A recent poll of 18-to-29-year-olds by Harvard University found that a majority of the respondents did not “support capitalism.” This was too much for Representative Nancy Pelosi, the House minority leader. At a postelection town hall, she bolted out of her seat to declare: “I have to say, we’re capitalists—that’s just the way it is.” Maybe it’s time for the Democrats to start a conversation with these young lefties.

The Clinton partisans who remain in charge of the party machinery will no doubt reject the conclusions of “Autopsy.” The report suggests that the Clinton-Obama crowd tilted the action away from the party’s core voter blocs—labor, people of color, and young people—in order to court suburban voters and maintain the party’s alliances with high finance and multinational corporations. This might also explain why the DNC decided not to undertake its own postelection review. Suspicions are already circulating: As Politicoreported, “Party officials involved in fund-raising say donors repeatedly turn them away with a ‘try again next year,’ especially since it became clear there won’t be an official party autopsy from 2016.”

That donor-centric strategy was highly valuable when it came to raising money for Clinton’s campaign. It turned out to be not so good for winning her the election.

Please support The Nation's journalism. Get a digital subscription for just $9.50!