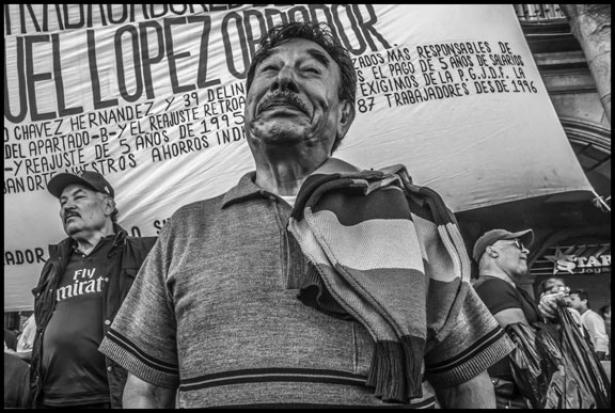 A worker who lost his job in the privatization of the Ruta 100 bus line in Mexico City was overcome with emotion during the inauguration in the zocalo of President Andres Manuel Lopez Obrador, Photo: David Bacon

A New Day for Mexican Workers

The Lopez Obrador administration is changing the law so that workers can actually choose a union and vote on their contracts.

The economist and co-founder of the Landless Workers’ Movement (MST) and La Via Campesina International João Pedro Stedile: "We have to explain to people that corruption is endemic – where there is capitalism and the bourgeois State, there will be corruption."

So long as Colombia’s peace accords fail to contend with the liberal economic order or challenge extractivism and militarism in the country, they will fall short of achieving true gender justice.

An independent researcher speaks frankly about the roots of the country’s economic crisis and outlines a series of policies to revert it.

The outcome of the electoral contest is far from certain.

Get more background on the Ahwazi steelworkers' struggle here.