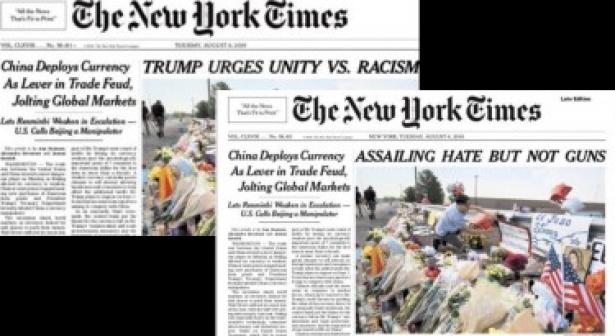 A coalition of more than 50 human, civil, and digital rights groups has called on Twitter to ban key advocates of white supremacy from its platform.

How the Media Whitewashed the Shootings

By Lulu Garcia-Navarro
August 9, 2019
The Atlantic

It was the deadliest attack targeting Latinos in recent U.S. history. Why wasn’t that the headline?

“Trump vs Racism”: How Wrong a Headline Can Be

Readers, journalists, and politicians taking to Twitter to attack the New York Times for failing to call out Trump’s racism and accepting his narrative that he opposes racial discrimination.

She proposes to make sure “every home in America has a fiber broadband connection at a price families can afford.”

By Nathan Robinson
August 10, 2019
The Guardian

The Fox New host’s nightly diatribes are making the US an ever more terrifying place for immigrants and people of color.

The decision, by the federal Ninth Circuit about an Illinois privacy law, is the first by an American appellate court to directly identify the unique hazards of face surveillance.

With their incursion into cyberspace, government bodies seek to project an image of their power not just at points of contact but at all times and in all places.