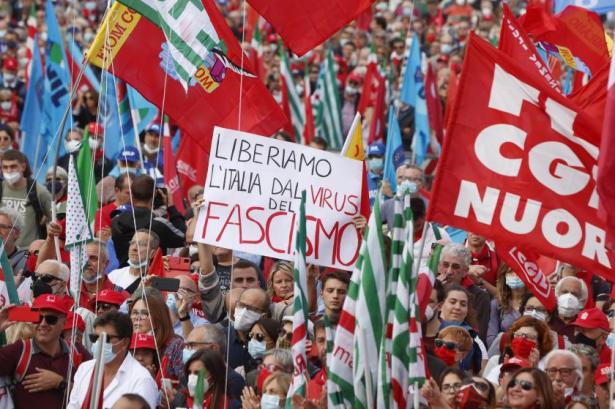 “We free Italy from the virus of fascism...” at mass rally in Rome. Credit,Evrensel

Food Sovereignty presents a radical overhaul to notions of “food security.” It recognizes people and local communities as the principal actors in the fight against poverty and hunger. It calls for strong local communities and defends their right to produce and consume before trading the surplus.

The Korean Confederation of Trade Unions (KCTU), the country’s largest labor union umbrella with 1.1 million members, is organizing a massive strike and street action in a broad-based front with South Korea’s urban poor and farmers.

Perú Libre leader Vladimir Cerron announced that his organization decided not to give the vote of confidence to President Pedro Castillo’s new ministerial cabinet, which is lead by Mirtha Vasquez. Cerron pointed out that this Cabinet is a demonstration of the Castillo administration's political turn towards the center-right side.

Chile’s Constitutional Convention promises to shift the balance of power in a society long prey to neoliberal dogmas. But Communist MP Camila Vallejo says the Chilean right will stop at nothing to defend ruling-class interests.

Thousands of Puerto Ricans marched down a main highway in the capital of San Juan on Friday to protest the privatization of the island’s public electricity grid, which has left them with unprecedented outages, longer than normal restoration times, and billing increases.

From Africa: The Root of the Problem  Nanjala Nyabola / African Arguments (London)