Never Again — Not for Anyone, Not Just the Jews

The first time I was called a “self-hating Jew” was almost 15 years ago by someone I considered a close friend. It stung and I felt confused. 15 years later I have never felt stronger in my stance as a self-loving anti-Zionist Jew. 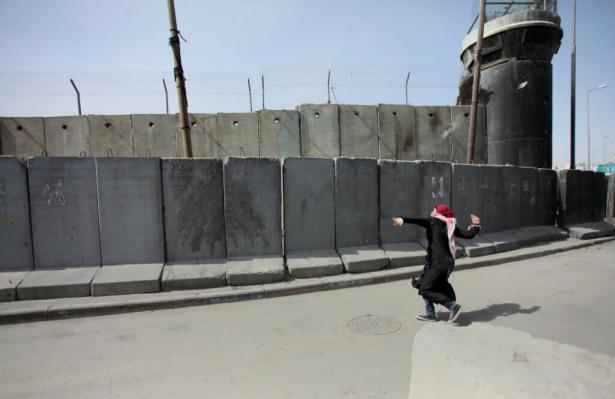 A Palestinian woman throws stones at Israeli border policemen during a rally ahead of International Woman’s Day, at Galandiya checkpoint near the West Bank city of Ramallah, March 7, 2015., Photo by Shadi Hatem (C) APA // Mondoweiss

The first time I was called a “self-hating Jew” was almost 15 years ago by someone I considered a close friend. I had never heard this epithet before. It stung and I felt confused. Why would she call me that? Why does supporting Palestinian rights and questioning the Israeli occupation of Palestine make me self-hating? And what does that have to do with my Judaism?

Israel/Palestine seemed like a clear-cut situation to me. At the time, I didn’t know much about that history but I knew Israel did not exist before 1948 and what did exist was Palestine. How could taking a country away from the people who had been there for centuries be right? And how could we not all condemn such an act?

15 years later I have never felt stronger in my stance as a self-loving anti-Zionist Jew.

I grew up in New York. My grandparents were Holocaust survivors. I was taught “Never again.” This lesson, I understood, was meant to apply to all people. I grew up watching my parents fight for the rights of oppressed and marginalized people. In the 90’s we boycotted Nike, to oppose sweatshops and child labor. Shortly after South African Apartheid ended in 1994, my parents took my siblings and myself to see Nelson Mandela speak at his first New York appearance. We marched against the Iraq war in 2003. We demonstrated for women’s rights and against the racial profiling that was taking place after 9/11. My parents were arrested numerous times for standing up for what they believed in, including against police violence and the murder of Amadou Diallo. I knew that the need to fight for equality and justice for all people followed inexorably from what I learned from my parents and my grandparents. Never again.

So, it was no leap when I got to university and joined an anti-racist student group. The first call to action I took part in was to demand that the university divest from Israel. I had never heard anyone talk about divestment before I joined this group. But freshman year in my Intro to Middle Eastern History class I learned that, unlike the Zionist mythologies that orbit most Americans about a land without people for a people without a land, there were in fact millions of Palestinians living there, in what was called Palestine. I also learned that nearly three quarters of a million of these people had been expelled from their homes and their villages, and those who remained were now second-class citizens in their own land. So of course, we must stand up for their rights and freedoms.

In 2005 Palestinian civil society called for international Boycott, Divestment and Sanctions (BDS) of Israel. There were seven of us in this anti-racist student group and we would follow their call. There was not yet a Students for Justice in Palestine on campus in those days; that would come several years later. Our small, but committed group did our best to mobilize community members. We organized a demonstration, which, sadly, did not get much attention. Still, this was a clear anti-racist, anti-colonialist issue to me. At 18 years old I wondered, why wasn’t this issue discussed more on campus?

Between my upbringing in a home rooted in social justice, to majoring in Ethnic Studies at college, where I learned more deeply about racism, classism, colonialism, and imperialism, I thought I had a deep understanding of oppression. So, in 2011 when I went to Palestine, I felt I was as prepared as anyone could be. However, what I witnessed was absolutely devastating.

What I saw in the West Bank and in Jerusalem was a complete Apartheid system. Palestinians had ID cards saying where they could and could not go, who they could and could not live with. They had to go through checkpoints and were routinely harassed by soldiers, settlers, and Israelis who supported the occupation. They were cut off from water supplies, had no freedom of movement, limited rights of worship or expression, and were often arrested for what we in the U.S. would call “freedom of speech.” There are streets that are for “Jews only.” Reminiscent of the Jim Crow “whites only” era in the U.S., Palestinians are walled in, fenced in, and often their homes demolished and lands taken. In 1948, at least 750,000 Palestinians were kicked off their land, out of their homes in order to create the state of Israel. The Nakba of 1948, or catastrophe, was the intended outcome of the Zionist project of colonization, the aim of which was to create a Jewish state of Israel. Those expulsions continue today in Sheikh Jarrah and elsewhere. These are not “evictions” but the brute theft of land. And it is one of the many masks that settler colonialism wears as it displaces and erases the native.

As Human Rights Watch stated in 2021, and as Amnesty International recently declared this February 2022, both in well documented reports, this is in fact Apartheid.

Gaza, with all of the Orientalist and Islamophobic rhetoric employed to dehumanize its
inhabitants, is in fact the largest open-air prison in the world. Gazans have no freedom to leave should they want or need to. They are largely refugees forced from their homes in what is now called Israel. They cannot freely access clean water, healthcare supplies, building supplies, educational materials, their fishing rights are restricted, they can’t leave for weddings or funerals or college. Bombing an open-air prison, bombing schools, hospitals, roadways and mosques is not “self-defense” no matter how many rockets get sent towards Israel. One cannot “self-defend” when they are the occupier. And Israel has one of the most advanced armies in the world.

We are told Israelis and Palestinians need to compromise. Would we have told Black South Africans they should have compromised more during their period of Apartheid? Should they have accepted less than full equality? Would you have hesitated to take an unequivocal stand against South African Apartheid?

It is often said that this issue is “complex” or “complicated.” But it is not complicated. And if my Jewish roots have taught me anything, it is actually clear as day. Never again. To anybody.

What we are witnessing is an ethnic cleansing. And as a Jew who knows exactly what that looks like from my own family’s history I say, Israel does not speak for me. Zionism is racism. Let me say that again. Zionism is racism. The Zionist project is foundationally linked to dehumanizing Palestinians, erasing their culture, stealing their land, displacing them from their homes; an ongoing colonization effort that makes them second or third class citizens at best, and confined subjects/inhabitants at worst (as is the case for the approximately 5 million Palestinians in the West Bank and Gaza Strip).

We cannot pick and choose what marginalized communities we stand in solidarity with if we truly believe in freedom, justice and liberation for all. If we stood up against sweatshops and against the Iraq war, if we marched on Washington for ALL women’s rights, if we stand up for Black Lives, the AAPI community, for LGBTQIA+ rights, then we must stand up for Palestinians. One cannot be pro Black Lives and not be pro the liberation and freedom of Palestine. No one is free until everyone is free.

I am thrilled to see how much has changed and how much more awareness there is now than 15 years ago when I was first called a “self-hating Jew.” This is no doubt due to the bravery of Palestinians and the incredible resistance and organizing that is taking place in Palestine and by Palestinians around the globe who are fighting for freedom. May we all continue to follow their lead and let our awareness grow.

The well documented Apartheid system in Israel/Palestine, the theft of land, besiegement, violence, and the Zionist project of colonialism are all very much currently taking place. It is therefore imperative that we continue to understand more clearly how Zionism is intertwined with white supremacy and how our fight against racism in the U.S. must therefore extend to Israel. May we become more grounded in our understanding of Israel’s Apartheid system and the need to break it. And may we continue to fight to see the day where Palestinians are not only liberated but receive what is owed to them. Their homeland. Without walls. Without ID cards. Without the violence and terror that is their everyday.

In 2019 I received my German citizenship, owed to me for the displacement and atrocities done to my family during the Holocaust. May I live to see the day my Palestinian friends, and all Palestinians, receive their right of return, their homes, their reparations, their full equality. And may we all see their humanity. Remember the lesson clearly. Never again. To anyone.

[Leta Hirschmann-Levy is an actor from New York City. She is also a teaching artist with Voices of a People's History of the United States.]