Labor Is on the Offensive

Aided by a historically tight labor market and a supportive president and National Labor Relations Board, unionized workers have been able to use their newfound leverage to win demands that forward their agenda. 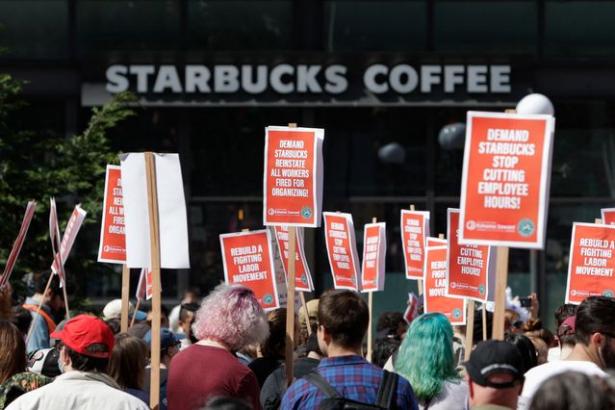 Starbucks Coffee shop is seen in the background as people gather at Westlake Park during the "Fight Starbucks' Union Busting" rally and march in Seattle, Washington on April 23, 2022.,Agence France-Presse (AFP)

The American labor movement is not only alive and well. It’s kicking and fighting, too.

Since the onset of Covid, American workers have experienced a resurgence of union activity and interest in unions. Beginning with health and safety concerns during the early days of the pandemic, followed by rising inflation during the recovery, local unions have been taking a more aggressive approach in contract negotiations. They are demanding larger wage increases, better scheduling practices, stronger safety measures, the end of two-tier benefits and pay schemes, and more. In negotiations with John Deere, Kellogg’s and others, rank-and-file members have even voted down generally lucrative agreements, sending leaders back to the table to demand more. Those decisions won 10% pay increases and $8,500 ratification bonuses at John Deere and cost-of-living adjustments at Kellogg’s.

Workers involved in strikes this past year have cited the cycle of concessions during economic downturns followed by periods of relative prosperity in which nearly all the economic gains go to the top 10%. More-progressive unions draw a clear line between those past concessions and the increased concentration of income at the top. But all contend it’s simply a matter of fairness—wages have been stagnant since the 1970s despite continual increases in worker productivity and salaries of top executives. Regardless of their reasoning, many labor activists say it’s time for a readjustment, or to use economic terms, a “market correction,” to restore the middle class.

Aided by a historically tight labor market and a supportive president and National Labor Relations Board, unionized workers have been able to use their newfound leverage to win demands that forward their agenda. Company managers don’t have access to their usual reserve pool of unemployed workers desperate to fill jobs. That makes the threat of a strike more powerful than it has been in recent memory. Three times as many workers went on strike in 2022 than over the same period in 2021. President Biden said he intends to be the most pro-union president in history. Even if his support is just rhetorical, it has inspired many large unions in manufacturing, transportation, education, and healthcare to seize the opportunity to win major gains for their members.

But contract campaigns and strikes are only part of the story. The labor resurgence is happening on a second front as well, among nonunionized workers in industries and occupations that have historically lacked measurable union representation due to high rates of turnover and part-time and temporary employees. Workers at Amazon, Starbucks, Chipotle, Apple, Trader Joe’s, and in over 600 other workplaces have voted to form unions during the first six months of this year—up 80% percent from the same period last year. This is no small feat given that employers that engage in hostile, and often illegal, anti-union activities frequently receive little punishment under U.S. law, even when they fire workers for engaging in protected organizing activity.

This shift represents a significant change in fortune for a labor movement that has been slowly but steadily losing its share of workers for decades. The consequences could go far beyond changes in individual workplaces.

Social science research on income inequality, including my own, has consistently found that unionization is one of the most powerful factors when it comes to reducing inequality. When workers have a voice and bargaining power on the job, they bring home a bigger share of the economic pie they help to produce. These gains benefit not only the unionized workforce, but also typically spill over to other workplaces as nonunion shops raise their pay rates as a means of undermining unionization efforts within their own companies. The labor resurgence could help resuscitate the middle class by ensuring prosperity is shared broadly.

The labor resurgence could also have important consequences for democracy in America. As the federal government has become increasingly gridlocked, Americans have turned to local organizations to solve pressing issues. In labor, we are witnessing an insurgent direct-democracy movement underway in workplaces across the country. Research shows that societies with stronger unions have stronger democratic participation. American workers are demanding to have a voice, and some influence in the decisions that impact their daily lives in the place where they spend a significant percent of their waking hours—at work. Unions have demonstrated the ability to be a powerful means for addressing their members’ concerns, especially when they work in partnership with other community organizations.

An important element of the labor resurgence is an increase in demands by workers on issues that go beyond just wages. For example, the major sticking point in the near-miss national railroad strike was work-life balance. Teamsters at UPS are determined to have air conditioning installed in all trucks and to replace temporary and part-time jobs with full-time employment. Starbucks Baristas cite scheduling and staffing as major motivators for organizing. Teachers across the U.S., including in several Republican-dominated states, have struck for increased educational funding and resources for students. Janitors with SEIU in Minneapolis even struck over concerns about climate change.

This broadening of the scope of bargaining demands indicates a labor movement on the offensive. It also suggests an active and engaged membership bringing new ideas and concerns to the table. Given that member engagement is the real source of power in a union, it is likely that the current upsurge will continue into 2023 and beyond.

[Todd E. Vachon is assistant professor of Labor Studies and Employment Relations at the Rutgers School of Management and Labor Relations.]