President Biden's statement on Tuesday urging the U.S. House of Representatives to approve the Protecting the Right to Organize Act follows his earlier support for workers who want to organize an Amazon warehouse in Alabama. 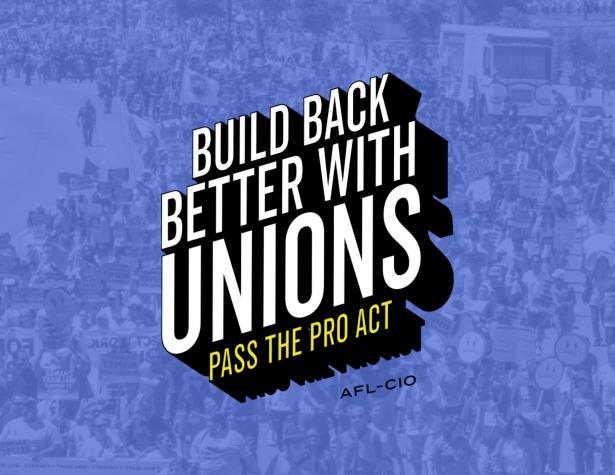 On Tuesday, President Biden called upon the U.S. House to approve the Protecting the Right to Organize (PRO) Act, which includes a slew of provisions that proponents say will make it easier for workers to form unions, conduct strikes, and bargain fairly., AFL-CIO

President Joe Biden on Tuesday continued his string of pro-union actions since entering the White House by calling for the House to pass a bill to make it easier for employees to unionize.

Biden in a statement said he's strongly encouraging the House of Representatives to pass the so-called "PRO Act," a bill that he said would encourage unions and "dramatically enhance the power of workers to organize and collectively bargain for better wages, benefits, and working conditions."

The statement is the latest high-profile pro-union policy announcement since taking office, and all signs point to more in the future.

The coronavirus pandemic has put a renewed focus on workers rights, with Americans continuing to grapple with questions about job security and the health risks associated with returning to work.

Notably, as Big Tech has continued to deal with emerging organizing efforts and a potential gig economy overhaul, Biden appears to have weighed in on historic unionization efforts for thousands of Amazon workers working at the company's Alabama warehouse.

In a video released earlier this month, he expressed support for organizing efforts by "workers in Alabama" and others across the country.

"This is vitally important, a vitally important choice, as America grapples with the deadly pandemic, the economic crisis, and the reckoning on race — what it reveals the deep disparities that still exist in our country," Biden said in the video. "And there should be no intimidation, no coercion, no threats, no anti-union propaganda."

Biden has also taken more symbolic approaches to signify that unions will be top of mind during his presidency.

For example, on his first day in office, a bust of labor leader Cesar Chavez was installed behind his desk.

He's also nominated Marty Walsh, Boston's mayor and a former union leader, to be labor secretary. However, it's also worth noting that Biden's commerce secretary, former Rhode Island Gov. Gina Raimondo, faced stern opposition from unions in the state over her efforts to increase the retirement age and push through pension reform.

There are still a number of labor-related actions the Biden campaign proposed that Biden could take action on.

As part of his campaign platform, Biden also expressed support for other labor legislation, including the Fairness to Farm Workers Act and the Domestic Workers' Bill of Rights.

Biden's presidential campaign plan for labor also includes forming a cabinet-level working group in the first 100 days of the presidency to increase union density. Another campaign goal was to issue a requirement for federal contractors to sign agreements committing to not run anti-union campaigns, which could have dramatic impact on large tech companies that are on contract with the federal government.

The "Protecting the Right to Organize (PRO) Act" includes a slew of provisions that proponents say will make it easier for workers to form unions, conduct strikes, and bargain for better wages and working conditions.

It could also upend existing labor law by allowing for actions such as National Labor Relation Board-levied fines and potential civil penalties for labor rights violations; the weakening of states' "right-to-work" laws, which say workers cannot be compelled to join a union as a requirement of their job; and -- consequential to the freelance and gig economies -- the implementation of an "ABC" test to determine if a person is an employee or contract worker.

"I urge Congress to send the PRO Act to my desk so we can seize the opportunity to build a future that reflects working people's courage and ambition, and offers not only good jobs with a real choice to join a union — but the dignity, equity, shared prosperity and common purpose the hardworking people who built this country and make it run deserve," Biden's statement said.

Even if it passes in the House, it will face an uphill climb in the Senate. The bill, which was first introduced in 2018, faces significant opposition from business groups and executives.

Suzanne Clark, the president of the US Chamber of Commerce said in a letter to Congress on Monday that the bill "would impede the economic recovery through its many harmful labor and employment policies."

Biden promised on the campaign trail that he would be "the most pro-union president you'd ever seen," but he's been a pro-union politician since his time as a senator.

According to his campaign, Biden was among the first to say in the 1970s that he supported secondary boycotts -- action by a union against an employer over its business with a company in a labor dispute. He was also an original co-sponsor of the proposed Employee Free Choice Act.

He also spoke out about anti-union efforts during his time as vice president.

In forceful remarks at a United Auto Workers conference in 2014, amid an emergence of right-to-work laws in states, Biden argued that big business and conservative backers wanted a "right for them to eliminate your right to have a say in your work." He said unions were "the only ones keeping ... barbarians at the gate."

CNN's Alicia Wallace and Betsy Klein contributed to this report.