Tidbits - May 13, 2021 - Reader Comments: Palestine - What You Can Do; Covid Vaccines and Herd Immunity; Amazon Union Campaign - What Next; Help Send Urgently-Needed Syringes to Cuba;; more...

May 13, 2021 Portside
Printer friendly
Tidbits - May 13, 2021 - Reader Comments: Palestine - What You Can Do; Covid Vaccines and Herd Immunity; Amazon Union Campaign - What Next; Help Send Urgently-Needed Syringes to Cuba;; more... Published May 13, 2021 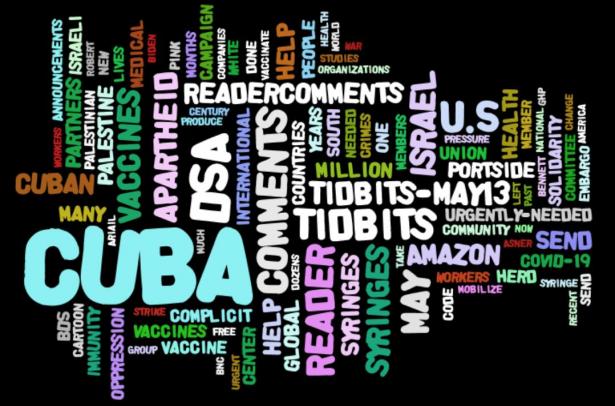 Outraged at apartheid Israel’s crimes against Palestinians in occupied Jerusalem & Gaza? (The Palestinian BDS National Committee (BNC))
Re: Reaching ‘Herd Immunity’ Is Unlikely in the U.S., Experts Now Believe (Judith Halprin)
Re: Biden to Support Waiving Patents for COVID-19 Vaccines (Stan Nadel)
Re: U.S. Workers Continue Unionization Fight – But Will Amazon Prevail? (Andrew Lenton)
Re: Organizing in the South (Joanne Forman)
The Remake  --  cartoon by Clay Bennett
Re: Anti-Asian Violence and the U.S. Role in Asia (Joseph Kaye)
Re: Union Nurses in Massachusetts Are Waging the Longest Current Strike in the US (Steven Wishnia)
Re: Colombia on the Brink (﻿Brad Smith)
We're the Party of the Big Tent  --  cartoon by Robert Ariail
Re: How Socialism Stopped Being a Dirty Word for Some Voters - And Started Winning Elections Across America (Melvin Hugo Carlos Pritchard) 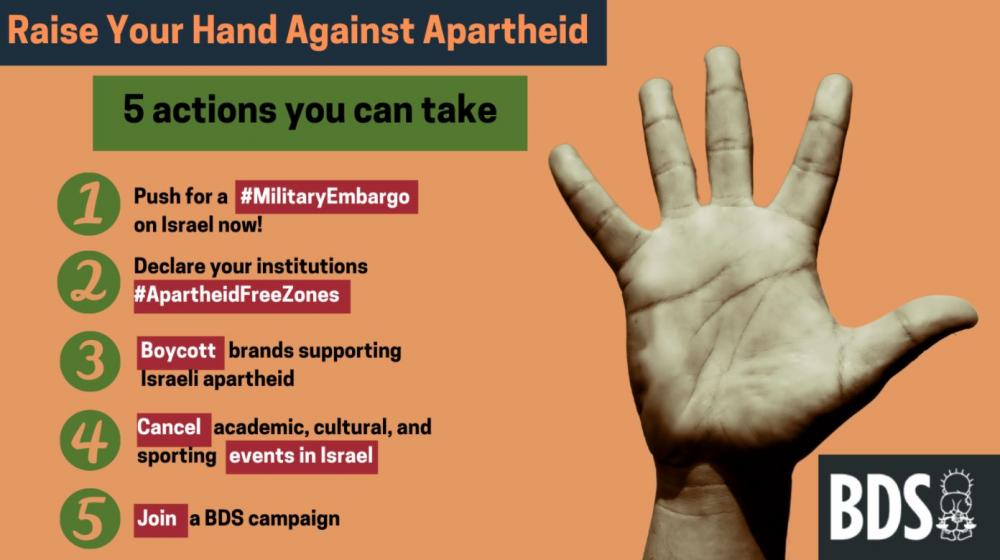 In many countries, governments and corporations are deeply complicit with Israel’s decades-old regime of military occupation, settler-colonialism and apartheid, just as they were complicit in the apartheid regime in South Africa. Israel can only sustain this regime of oppression with international complicity.

Here are the 5 most effective things YOU can do to challenge this complicity and support the Palestinian struggle for freedom, justice and equality:

Channel your anger and mobilize to dismantle apartheid and all forms of racism and oppression.

Re: Reaching ‘Herd Immunity’ Is Unlikely in the U.S., Experts Now Believe

well done cretins, preventing the end of a scourge. Good thing you weren't around for polio, smallpox, measles, etc.

Re: Biden to Support Waiving Patents for COVID-19 Vaccines

This is PR crap from Biden. It will take months to get the waiver if it an even be done and then there are only a couple of countries that would have the potential capacity to actually produce the vaccines if one is agreed on--and they would probably need at least 1-2 years to get production online (especially for the sophisticated and hard to produce RNA vaccines). India already produces millions of doses of a Corona vaccine every month--and unlike the US, but like the EU, India has been exporting 1/2 or more of what it has been producing. The answer isn't canceling patents, the answer is throwing massive resources into increasing production in places that can do so quickly and then sending the vaccine to where it is needed. As long as the US refuses to export both vaccines and their key ingredients most of the world will be screwed and PR about supporting vaccine waivers won't amount to shit.

Re: U.S. Workers Continue Unionization Fight – But Will Amazon Prevail?

what is needed is an industry-wide strategy involving job actions at warehouses throughout the country, instead of one company and one facility at a time

Re: Organizing in the South

I can understand WELL the problems: though I was not born there, I grew up in Grenada, Mississippi 1942-7; it was very educational. I was a member of the Free Southern Theater in New Orleans in 1965, and established a summer theater group via SSOC in Nashville in 1967. Last time I was in the South was 2001, for a lecture tour on women labor leaders in Florida.

News today of the severely retrograde legislation in Florida. They never give up, do they?

The Remake  --  cartoon by Clay Bennett 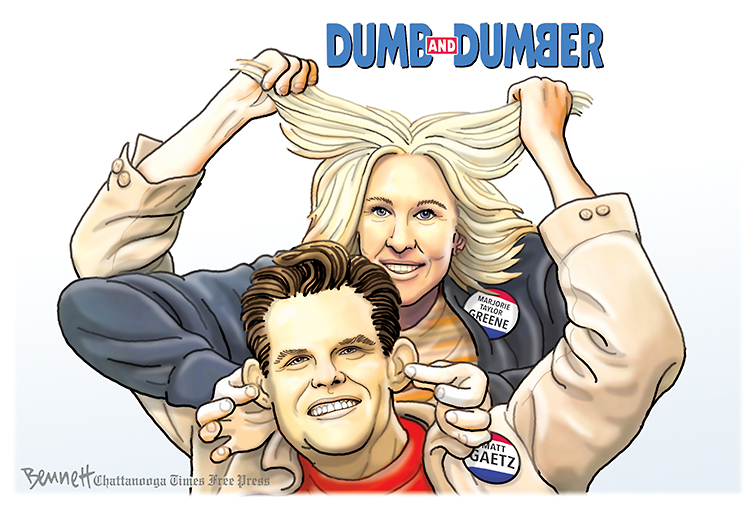 Re: Anti-Asian Violence and the U.S. Role in Asia

Goes back to the "Spanish-American War" which was actually a war against Filipinos, a war fought with a unique barbarism by the U.S.  And don't forget the dropping of atomic bombs on Japan, nor the Korean War, waged with truly genocidal barbarism.

Re: Union Nurses in Massachusetts Are Waging the Longest Current Strike in the US

The longest current strike in the U.S. is actually by workers at the Spectrum cable-TV and Internet company in New York. About 1,800 technicians, members of International Brotherhood of Electrical Workers Local 3, have been on strike since March 2017 — more than four years. Owner Charter Communications has largely refused to negotiate — the strike was provoked by its demand to demolish workers' health and pension benefits — and is trying to get the unions decertified.

Re: Colombia on the Brink

Respectfully, the tax proposal was for 23 Trillion Colombian pesos.

We're the Party of the Big Tent  --  cartoon by Robert Ariail 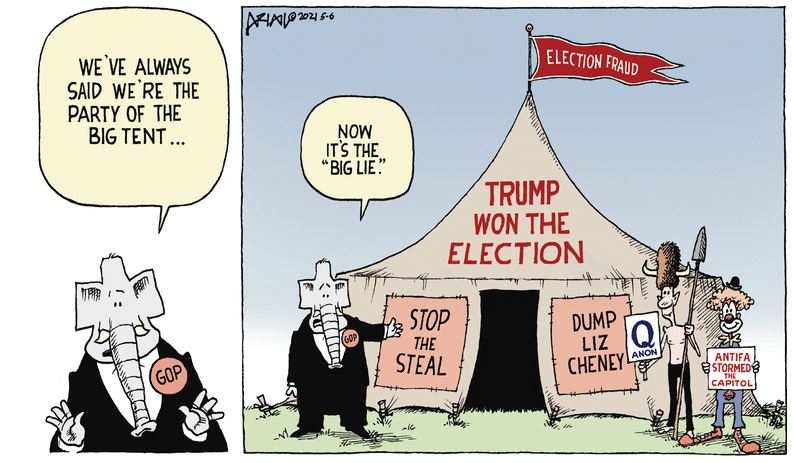 Re: How Socialism Stopped Being a Dirty Word for Some Voters - And Started Winning Elections Across America

I found this article by Mr. Kluever is a naïve summation of the Socialist Party and DSA. It demonstrates the long reach of anticommunism and racial blindspots in the 21st Century. Last summer I rejoined DSA after much trepidation given its white demographics, poor international politics, and other things. On paper it seemed that DSA had overcame its weaknesses, but to me, practice is a better indicator of  DSA's change. After 8 months I found DSA to be a lot like SDS before the 1969 split. It was a federation of caucuses that don't have a clue how to advance socialism in the 21st Century, beyond progressive platitudes and functioning like a part of the non-profit industrial complex. DSA is a federation of white sects (that's what the various caucuses represent) which can never move beyond its white demographics.

I am not some naive member of color who joined in wake of the Bernie Sanders campaigns of muddled social-democracy of 2016/2020.. I am a founding member of DSA. I was a member of the New American Movement prior to the ill fated merger-I think that was a mistake. I followed the example of my mentor the late Manning Marable who the Harringtonites chased out in 1986 (the year I left DSA). I have been a socialist since 1975 in the wake of the Portuguese Revolution that overthrew fascism.

After my recent rejoining, I left DSA  San Francisco chapter a couple of weeks ago after 8 months, so my knowledge of DSA is a recent experience. I left because the SF chapter refused to discipline racist members of the Education Committee. When I filed a grievance, it took 6 months to tell me that nothing was going to be done. For me, this was the last straw.

It is naive to say, socialism is the recent for electoral successes of many DSA members. As a history instructor for 17 years at a community college, I think there are deeper reasons. We have a group that has a level of political education coming out of the Bernie Sanders campaign. I do not see this cohort of white youth, anymore for racial justice than their parents who are my peers and their grandparents. To me the Achilles heel of the US socialist Left is race and its role in social change. DSA does not have a handle of tackling it. The AfroSoc committee is another clueless caucus among many--to say they will play a role in resolving this conundrum is not realistic at all.
I feel DSA will split at some point in the next few years due to one or more of the competing caucus attempting take over DSA.

A lot of DSA members don't know their organization's past. How can they know DSA's future? Mr. Kluever's article is a uncritical summation of 20th Century social-democracy. As a historian, I would expected more critical analysis. 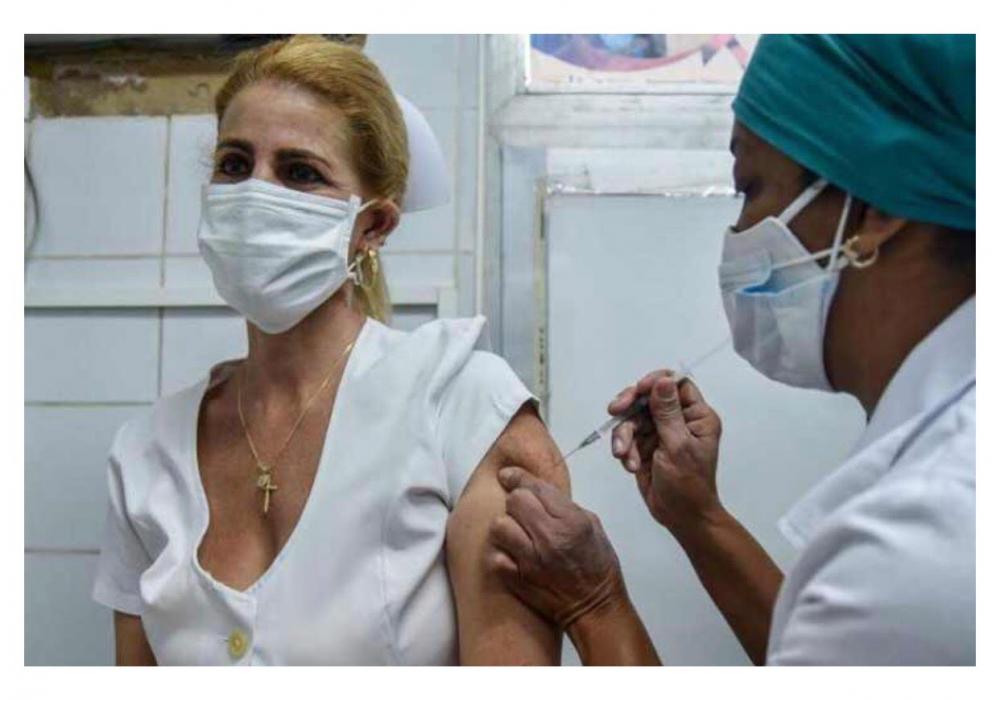 We’re launching our most important campaign ever—it’s part of fighting the U.S. embargo against Cuba and will help save many thousands of lives. The Center for Cuban Studies is joining Global Health Partners, Code Pink, and dozens of other organizations in the U.S., Canada and Mexico to raise the necessary funds to send syringes to Cuba. That will mean that everyone can be vaccinated with one of the vaccines currently being produced in Cuba. Cuba needs at least 33 million syringes to vaccinate every man, woman and child in the country. It only has 1/3 of that number.

One organization, Global Health Partners, has obtained the necessary license from the U.S. Commerce Department to send 10 million syringes to Cuba. The Center and Code Pink will be bundling donations that will be forwarded to GHP once we’ve raised our goal amount. We hope to solicit enough contributions to buy ONE MILLION SYRINGES: Our intermediate goal is to raise enough to buy one-half that number. That will insure that almost half a million syringes help put the Soberana or Abdala vaccines into the arms of those living in Cuba.

This will help save the lives not only of Cubans, but of all those who travel in and out of Cuba. It will help insure that Center trips to Cuba can start once again. It will help improve the devastated Cuban economy. The U.S. embargo against Cuba has meant the devastation of many aspects of daily life in Cuba, none more so than the current food and medicine shortages.

Let’s do what we can to fight against Covid-19 and the embargo. Please contribute as much as you can, as soon as you can. Thank you for all you do to help. 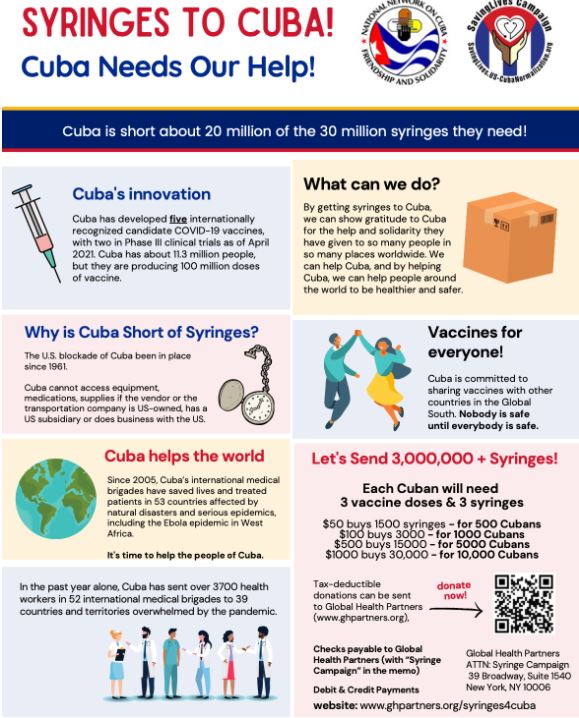 I’m writing to alert you to Global Health Partners’ urgent drive to rush desperately needed coronavirus vaccination syringes to Cuba. We’ve come together many times to supply vital medicine and medical supplies to Cuban hospitals and community clinics, and now I’m asking you to join me in GHP’s most crucial effort ever: empowering Cuba to vaccinate its entire population.

Please stand with us now to show your solidarity with a country that has done so much for the health of its own people, and for struggling communities around the world.

Over the past year alone, Cuba has sent 3,700 health workers, in 52 international medical brigades, to 39 countries overwhelmed by the pandemic. Cuba’s international medical brigades have treated patients and saved lives for the past 15 years in 53 countries confronting natural disasters and serious epidemics, such as the Ebola crisis in West Africa.

GHP has already delivered more than $190 million worth of scarce medicines and medical supplies to Cuba, while building opposition to Washington’s cruel and immoral embargo. With this track record, and your solidarity, we’re ideally positioned to make this syringe campaign a success.

Cuba is poised for a decisive push to combat the deadly virus: it has developed five internationally recognized candidate COVID-19 vaccines, with two in Phase III clinical trials as of April 2021. Cuba has 11.3 million people, but plans to produce 100 million doses of vaccine, to meet its commitment to sharing its low-cost vaccines with poor countries in the developing world.

But your contribution of any size is urgently needed to stock our first shipment of syringes. Cuba has the vaccine it needs to protect its people from COVID-19, and a well-developed grassroots medical network to provide the shots. The only thing missing is the syringe supply to make it possible.

Please help put lifesaving vaccines into Cuban arms now with your generous, tax-deductible donation to our syringe campaign. Let’s match Cuba’s internationalism with our own friendship and compassion for the Cuban people!

With my deepest gratitude,