In ‘Act of Fascism and Supremacy,’ Israel Bans Palestinian Flags in Public Spaces

After protests in which tens of thousands of Israelis marched "together against fascism and apartheid," Israel's far-right security minister on Sunday ordered police to tear down Palestinian flags wherever they are found in public. 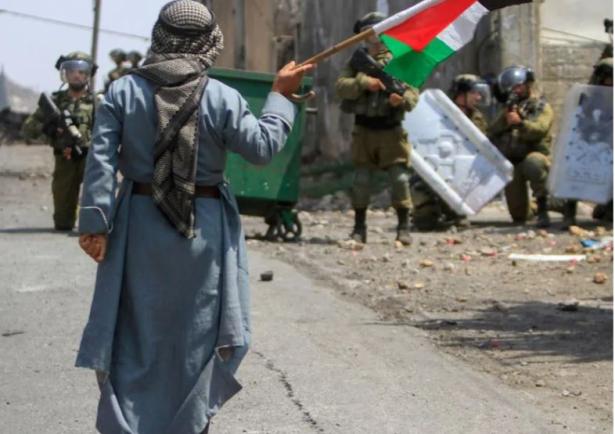 "Banning our flag—like it once was—is pointless posturing and a dog whistle to supremacists. It will backfire spectacularly."

"It can't be that lawbreakers wave terror flags, incite and support terror, and therefore I have ordered that terror-supporting flags be removed from the public space," explained Ben-Gvir—who was convicted in 2007 of incitement to racism and supporting a terrorist organization after he advocated the ethnic cleansing of Palestinians.

"Grow up," Zomlot tweeted. "Banning our flag—like it once was—is pointless posturing and a dog whistle to supremacists. It will backfire spectacularly."

"Like the original ban, it will encourage instead our people and freedom-loving people everywhere to brandish the Palestinian flag," he added, referring to a previous prohibition that sparked widespread defiance and creative acts of resistance before it was lifted in 1993 under the Oslo Accords.

Palestinian-American author and policy expert Yousef Munayyer tweeted Monday that "Israel holds an entire stateless nation under military occupation. They got enough nukes to start a regional conflagration. But they fear a piece of cloth."

Referring to policies including the withholding of $40 million in Palestinian tax revenue and the flag ban, Shtayyeh added that "we consider these measures a new war against the Palestinian people, their capabilities and funds, and a war against the national authority."

More than 1 in 5 citizens of Israel are Arabs, most of them descendants of people who remained in Palestine after the modern state of Israel was founded there in 1948, largely through terrorism and ethnic cleansing targeting Palestinians and British occupiers.

Israeli courts have affirmed that flying Palestinian flags is not a crime.

However, Israeli soldiers and police can remove the flags if they are deemed to pose a threat to public order.

According to TheTimes of Israel, Shabtai was reprimanded by Ben-Gvir for failing an order to prevent public celebration in Younis' village of 'Ara, where a jubilant crowd waved Palestinian flags and chanted liberation slogans to welcome the freed prisoner home.

[Brett Wilkins is a staff writer for Common Dreams.]