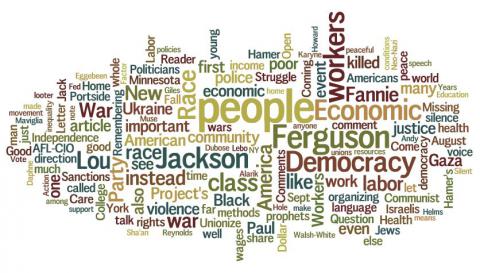 A bit of sobering historical context to start the day. The fight for human dignity continues.

Good Occasion to read: Many Minds, One Heart: SNCC's Dream for a New America, Wesley Hogan's account of SNCC's campaign to bring democracy to the South.

Besides her awe inspiring work as a civil rights campaigner, besides being a fearless truth teller to the powerful, and besides being a tireless organizer for economic justice, Mrs. Hamer possessed a beautiful and powerful singing voice.

You can hear it in "Go Tell It on the Mountain" on YouTube:

Re: The Coming Race War Won't Be About Race

I'm sick of the implication that this young man is a potential looter 'cause he's wearing a cloth around his face, instead of seeing it as protection against tear gas. This is typical of the stuff that TIME tries to pass off as journalism!

So far we are not going in a good direction! viva la revolucion!

provide economic justice and there won't be a 'race war.' But that means getting the likes of ALEC and the whole Right Wing millionaires and billionaires out of power. Register to vote, and vote Progressive. Then, we will have a chance at sanity and creating community. Fury provides nothing but destruction and more fury.

They do such an astounding job of confusion, chaos, divide. First comment i saw says...sick of the implication that this young man is a looter. Where did that come from? Clearly says protester. ??? Second says we are not going in a good direction. What is a good direction? Third goes onto economic injustice.

Here is what i see. A young man was killed. People were trapped in homes by police tape left to wonder while a body was left exposed to heat, sun and public. No answers, parents turned away etc. They are finally let out and still no answers. They gather to mourn, support, gather info and have an army descend upon them telling them to disperse. Firing teargas, rubber bullets, noise weapons. Hello? This doesn't upset, scare or piss anyone else off? No assembly. Curfew on adults. Not allowed to go home. A pregnant woman jerked out of her car and thrown on ground on her abdomen. Rude, inappropriate comments. Reporters arrested. No fly zones. These are people not animals escaped from the zoo. people, Like you and me. Put yourself in their place. This was your street, coz it very could well be next. If you don't know war when you see it, what hope do we have?

This is an important editorial Jabbar wrote for Time Magazine. Jabbar is pointing out how easily the majority of us get fooled into dividing among ourselves, talking about race instead of class, gender instead of income inequality, immigration instead of the real causes of declining wages. At the time of his death, Martin Luther King was trying to launch a new Civil Rights Movement, based on class rather than race - he called it a Poor People's Movement. He said the real problems in America were defined by income, not race, and could only be solved when we all come together to demand a fair share for everybody. We're still not there yet.

This piece is simply brilliant. If you don't like the article (from Time, of all places), don't read it. Or comment on what you disagree with. As to your insults to the fine people at Portside, they reflect on you far more than on anyone else.

You are right. Using race is just a tool among many others to keep us divided. I have been trying to remind people of an old saying.It goes:

United We Stand
Divided We Fall

I like - Divided We Fail
They have it figure[d] out and work together, as well as sink tons of money into ensuring we stay divided. There is even (not that I am religious in the way many perceive religion) a biblical reference to dividing.

The Tower of Babel

1. Now the whole world had one language and a common speech.

2 As people moved eastward,[a] they found a plain in Shinar [b] and settled there.

3 They said to each other, "Come, let's make bricks and bake them thoroughly." They used brick instead of stone, and tar for mortar.

4 Then they said, "Come, let us build ourselves a city, with a tower that reaches to the heavens, so that we may make a name for ourselves; otherwise we will be scattered over the face of the whole earth."

5 But the Lord came down to see the city and the tower the people were building. 6 The Lord said, "If as one people speaking the same language they have begun to do this, then nothing they plan to do will be impossible for them. 7 Come, let us go down and confuse their language so they will not understand each other."

Great note, brilliant. The problem, the war, is not between blacks and whites, or between muslims or catholics or jews, no, it's not, it has never been; it's between rich people and poor people. The labels those right-wing criminals (because it's a crime, no doubt about it) use to divide us are just circumstantial.

But one needn't be poor to be considered a threat and "justifiably" killed. Being Black is the main ingredient. Trayvon was walking home in his father's gated community. Jordan was pumping gas.

I went out with him in high school...he grew up in the projects and his height was his ticket out.

I thought this was a solid and thoughtfully written piece.

I was working on my Ph.D. in solid state physics at Case-Western University in Cleveland at the time of Kent State. One of the support staff who maintained the machine shop replied, when I commented on how horrible the shootings were, "They should have killed them all." I was, to say the least, shocked and expressed my dismay that he would say that; we didn't talk much thereafter.

At about this time I held the view that unions were no longer needed. I was so wrong. In this post on my website, I explain "Why Unions and a Minimum Wage are Necessary", 5/14/14: Unions and a minimum wage are absolutely necessary. That's because the number of jobs in what's called the "labor market" is manipulated by federal-level policies. U.S. wages are depressed by illegal corporate collusion to drive down wages, offshoring, importing foreign workers, using prison labor, and hiring undocumented workers without labor protections.

Abdul-Jabbar is correct; this is class warfare . the extremely wealthy against all others. That 50 million poor Americans is about the same number who were previously without health insurance. In a nutshell, people aren't "Taxed Enough Already" or "taxed too much", they're "paid too damn little." The link explains much of that and find those and other policies that drive people into poverty and put the "rich get richer" dynamic on steroids.

My article Why Government and for What 3/27/14, is on why we need government and for what purposes. It also points to an article on why the Libertarian Menace is far more dangerous than the Communist Menace ever was.

Re: Most Politicians Silent on Ferguson

Re: Missing in Action: AFL-CIO Should Be in Ferguson
(posted on Portside Labor)

whatever happened to the AFL-CIO's Committee On Political Education?

Re: Israelis in US: An Open Letter to American Jews on Gaza War

The letter by Israeli Americans represents a very needed and wonderful prophetic voice within the Israeli-Palestinian conflicts. It is important to note that prophets are called within the contexts of oppression or injustice. As in the past, the prophets may be rejected, persecuted and even assassinated in order to silence their voices and erase their messages. But, as we know from history, the killing of the prophets only brought more futile violence and in some cases, even doom to the unjust and violent nations and empires.

Ultimately, wars and violence as methods for the establishment of  lasting local, nation or international peace are counterproductive. They are do not work because they antithetical to the very conditions of peace, which they falsely claim to establish. Only humane methods and demonstrations of mutual respect in negotiations for mutual conditions of peaceful co-existence as peaceful neighbors in a crowed world with shared resources, will work.

Ultimately, the wars are about how to share the natural and essential scarce resources of land, water, as well as the freedom of movement and  trade.  It takes a spirit of courage, generosity, justice, wisdom and democracy to move away from the self-destructive methods of violence, war and extreme ethnocentrism and selfishness. This observation is also true for many parts of the world where violence and wars are employed  by Islamic extremists and intolerant jihadists, as means of establishment Islamic states, justice or peace, such as in Iraq, Syria and Nigeria.

Good for them, while the attacks on the unions continue and the RTW agenda keeps rolling, it's refreshing to see Americans mobilize for labor.

Re: The Hushed-Up Hitler Factor in Ukraine and the Neo-Nazi Brigade Fighting Pro-Russian Separatists

No one -  even most progressive media does not like to talk about this inconvenient truth.

Re: The Fed Should Be Meeting In Ferguson, Not Jackson Hole

The service industry class in Jackson suffers like any other group of working poor, with inadequate housing and health care and income to buy the pricey goods in Jackson. Hotel and restaurant workers cannot afford the high rents of the community and are known to camp or commute from other areas to bus the tables and change the sheets of those who enjoy Jackson at its best. Attempts have been made to relieve the housing issue. But I have known muddle class long term residents who were forced to move out due to the increase in there property tax. If the middle class feels the squeeze there, imagine the difficulty of the underpaid service workers.

Re: Sanctions & the Dollar: A Fall From Grace?

A small matter, but it's not Britton Wood but Bretton Woods.  The central point made is correct, but credibility is shaken with inaccuracies such as the above.

Re: On the Waterfront

As expected there were many responses to this article.  I would just like to add that it was the CP that played a important role in the founding of the ILWU.  It was Nick Bourdoise, a member of the communist party who was killed along with Howard Sperry on Bloody Thursday that led to the General Strike. It was the  Peoples World Newspaper that became the official voice of the strike and it was Communist Mike Quin who wrote The Big Strike.  Many longshoremen were members of the Party, and the Party was an important supporter of the strike.  Party headquarters were attacked on several occasions by the police and anti-communist thugs.

We must also remember that the Communist Party was a major player in the organizing of the auto workers and steel workers that later became the  Congress of Industrial Organizations.  It should also be noted that the expanding of the Labor Movement's organizing drives (including the Screen Actors, Screen Writers and the Directors Guild) came to a halt with the 1949 purges of Communists and progressives from union leadership, resulting in intracine battles and duel unionism.

Kazan was a traitor saving his own skin, as was  the author Howard Fast.

Please join us for the Economic Democracy Project's first event: ECONOMIC DEMOCRACY AND THE STRUGGLE FOR BLACK INDEPENDENCE: W.E.B. DU BOIS AND THE FEDERATION OF SOUTHERN COOPERATIVES

A talk by Jessica Gordon Nembhard (John Jay College) based on her book Collective Courage. Jocelyn Wills (Brooklyn College, History) is the respondent. Mike Menser from BC and the Participatory Budgeting Project is moderator.

To secure a free dinner RSVP to kedusei@brooklyn.cuny.edu by August 28th. www.economicdemocracyproject.net