labor Here’s What Unions Think about Medicare for All

How might collective bargaining change if health care wasn't tethered to work? Democratic presidential candidates aren’t in agreement over how to solve the current health care crisis, where 1 in 2 sick Americans cannot afford health care. 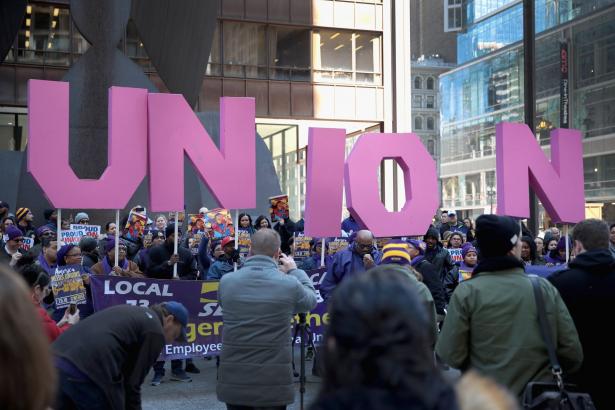 History tells us that the support of organized labor is critical to any major health care reform in the United States.

Unions represent 1 in 10 U.S. workers, making it one of the largest institutions nationwide. So what does that mean for “Medicare for All,” a policy that moves everyone into one public plan with no premiums or deductibles?

Everyone agrees universal health care coverage is the goal, but not everyone agrees Medicare for All is the only or best way to get there — an interesting distinction.

The largest union for registered nurses, National Nurses United (NNU) — with its more than 150,000 members nationwide — has been leading the campaign for Medicare for All, and praised legislation put forward by Sen. Bernie Sanders (I-VT) and Rep. Pramila Jayapal (D-WA). Going door-to-door, unionized nurses have been selling Medicare for All to the public.

“There is widespread and unprecedented support from unions for Medicare for All. In fact, unions representing a majority of union workers in the United States — over 9 million workers — have endorsed these bills,” a representative from NNU said in a statement to ThinkProgress. “We are at historic levels of labor support for this legislation, a fact of which we are extremely proud.”

The organization sent ThinkProgress a list of 20 national unions who support House and Senate single-payer bills, including those representing government employees, the postal industry, and utility workers. The Coalition of Labor Union Women and several state federations of the AFL-CIO, the nation’s largest labor federation, and AFL-CIO central labor councils are also on the list.

But at least three of the most influential unions NNU named aren’t actually married to Medicare for All: Service Employees International Union (SEIU), with 2 million members, American Federation of Teachers (AFT), with 1.7 million members, and United Automobile Workers (UAW), with nearly 1 million members.

“Any plan that provides more people with the care they need and gets us one step closer to affordable coverage is a step in the right direction,” she added.

The UAW, meanwhile, is focused on shoring up the Affordable Care Act, as the future of the health care law plays out in court.

“The UAW is focused on the millions of American’s that face peril over anti-worker court challenges to the ACA that can negatively impact the economy and jobs,” spokesman Brian Rothenberg said in a statement to ThinkProgress. “Regardless of how this sorts out, the ACA is an important first step and the UAW has a historic role in working toward health care as a right and not a privilege for all Americans.”

Like NNU, SEIU also represents health care employees, who experience the system as both a patient and a worker. Even so, SEIU doesn’t reach the same conclusion that Medicare for All is the only way forward for its members and the country.

“Our members support an array of improvements to the health care system,” said SEIU Executive Vice President Leslie Frane, naming Medicare for All, changes to the ACA (like lifting the subsidy cliff), and Medicare or Medicaid buy-in proposals as various options.

When asked if she sees the incremental approaches she listed as competing with single-payer, Frane told ThinkProgress, “I think it’s important to stay focused on the north star of universal coverage and simultaneously to work for real steps forward.”

The records of other unions are similarly complicated.

AFL-CIO did officially endorse Medicare for All in 2009, but activists have observed over the years that the support from organized labor largely exists on paper. There are some exceptions to this, of course, like NNU. But while unions have the numbers to make demands and shape the Democratic platform beyond labor issues, they aren’t always doing so.

“I don’t see unions dictating the terms of this debate,” said Shaun Richman, the program director of the Center for Labor Studies at SUNY Empire State College and former deputy director of organizing at AFT.

“The union position on Medicare for All will ultimately be the position of whoever is the candidate — the Democratic candidate,” he added.

Democratic presidential candidates aren’t in agreement over how to solve the current health care crisis, where 1 in 2 sick Americans cannot afford health care, even if they have insurance, and out-of-pocket health costs have outpaced wage growth.

The current front-runners are split: Former Vice President Joe Biden is completely against singe payer; Sanders and Sen. Elizabeth Warren (MA) support it; Sen. Kamala Harris (CA) can’t keep her position straight; and South Bend Mayor Pete Buttigieg supports “Medicare for all who want it” (a phrase that is antithetical to the policy).

Biden went as far as naming unions in his criticism of Medicare for All. “If they like their employer-based insurance, which a lot of unions broke their neck to get, a lot of people like theirs, they shouldn’t have to give it up,” he told CNN last Friday. 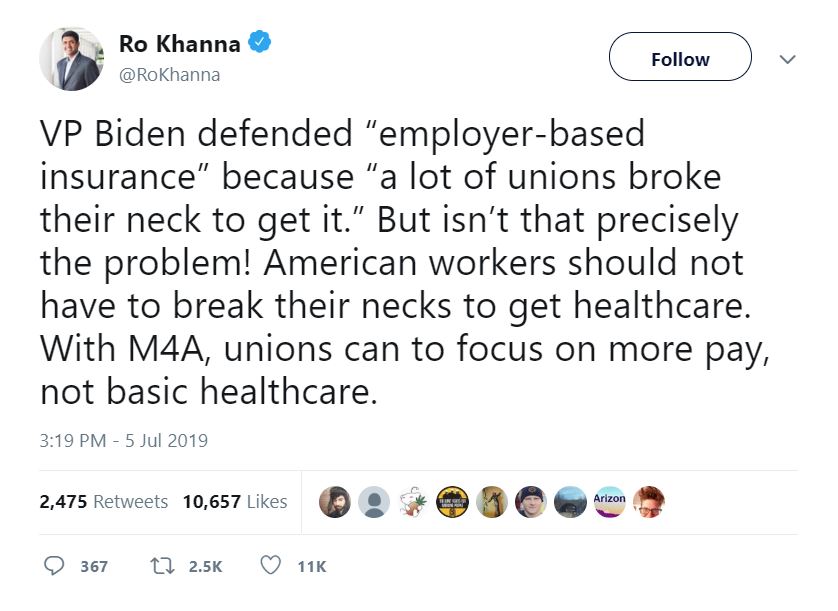 Biden received plenty of pushback for this argument from lawmakers within his own party. “American workers should not have to break their necks to get healthcare. With M4A, unions can focus on more pay, not basic healthcare,” Rep. Ro Khanna (D-CA) said on Twitter.

Asked about Biden’s characterization, SEIU’s Frane said, “Every man women and child in this country should have affordable, quality health insurance — that’s regardless of where they work, where they live, or the color of their skin.”

Richman went further, saying Biden’s comment is a bad-faith argument — and one Republicans have used against single-payer.

Last month, for example, Rep. Kevin Brady (R-TX) argued during a Ways and Means committee hearing on universal health care that under Medicare for All, “you wake up sick and now you’re worried because that great health plan your union negotiated for you … is gone.”

Richman said that negotiating for health care takes away unions’ bargaining power in other areas. “I experienced this when I was on active duty: Every round of contract bargaining, you already start out fighting back concessions because the first thing that management does is they put the health care plan on the table. You’re looking to make these gains but on day 1, it’s like ‘Hey, the premiums went up, we want you to pay more.'”

Medicare for All could really change how collective bargaining works, depending on how it gets funded. There’s more money for unions to play with if health care costs aren’t on the table. Unions can also dedicate more time and energy on other items like workplace safety, reasonable and predictable hours, diversity issues, and wages increases — perhaps even fight back for deferrals of wage increases in the past.

“I would think that every union that broke their necks for health insurance, you are going to fight to get that money back — otherwise it’s just wage increases that you gave up in the past,” Richman told ThinkProgress.