National Report on the Teaching of Reconstruction

The dominant and distorted scholarship framed Reconstruction as an illegitimate enterprise that failed to sustain multiracial democracy. For much of the 20th century, this bogus history was used to justify denying Black people full citizenship. 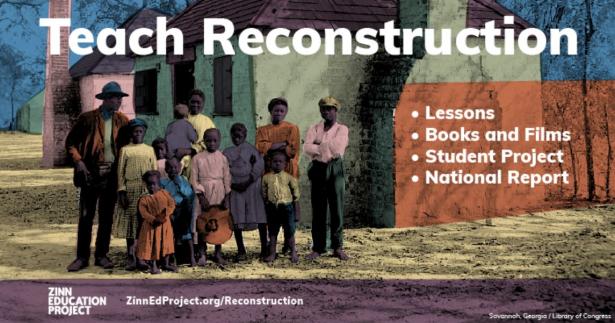 In his 1935 book, Black Reconstruction in America, W. E. B. Du Bois wrote, “One cannot study Reconstruction without first frankly facing the facts of universal lying.” He denounced the Dunning School, the dominant approach to Reconstruction at the time, which denied Black achievements and celebrated white supremacy.

Current scholarship is no longer dominated by the lies that Du Bois exposed in 1935, but those lies still loom large in popular understandings of Reconstruction. In writing a national report on the teaching of Reconstruction, Zinn Education Project researchers found the influence of the Dunning School in more than a dozen states’ standards and curricula.

The national report, “Erasing the Black Freedom Struggle: How State Standards Fail to Teach the Truth About Reconstruction,” was released in January of 2022 as part of our Teach Reconstruction campaign. We examined K–12 state social studies standards, interviewed educators, and concluded: State standards are awful; they misrepresent Reconstruction and need to be radically transformed.

The Dunning School’s distorted scholarship framed Reconstruction as an illegitimate enterprise that failed to sustain multiracial democracy. For much of the 20th century, this bogus history was used to justify denying Black people full citizenship. Its proponents used the pretense of scholarly objectivity to erase from the historical record Reconstruction’s monumental Black-led advances for racial justice.

Many K–12 standards seem to have followed suit. They emphasize the “failures” of Reconstruction, overshadowing its transformative nature and obscuring how white supremacists dismantled it precisely because of its successes. The “lies agreed upon” that Du Bois critiqued in Black Reconstruction are still alive and well. Learn more about the state of Reconstruction education and find recommendations for improvement in the upcoming report.

This report represents a comprehensive effort by the Zinn Education Project to understand Reconstruction’s place in state social studies standards across the United States, examine the nature and extent of the barriers to teaching effective Reconstruction history, and make focused recommendations for improvement.

Using our own Reconstruction standards as a guide, we examined course requirements, frameworks, and support for teachers. We also include stories about creative efforts by districts and/or individual teachers in each state to teach outside the textbook about Reconstruction.

The Zinn Education Project created and rooted our assessment of the state of Reconstruction education in the set of teaching and learning standards below.  These standards were developed in collaboration with scholars and teachers.

The foundational premise of any set of teaching and learning standards for the Reconstruction era should be Black people’s agency, highlighting both what Black people did (to end slavery, engage in politics, build institutions, etc.) and what goals, beliefs, and motivations undergirded those actions. Descriptions of the violent backlash to Reconstruction should emphasize how white supremacist ideology drove the effort to overturn multiracial democracy in the South and shaped the political and economic development of the entire nation after the Civil War. Read in full here. 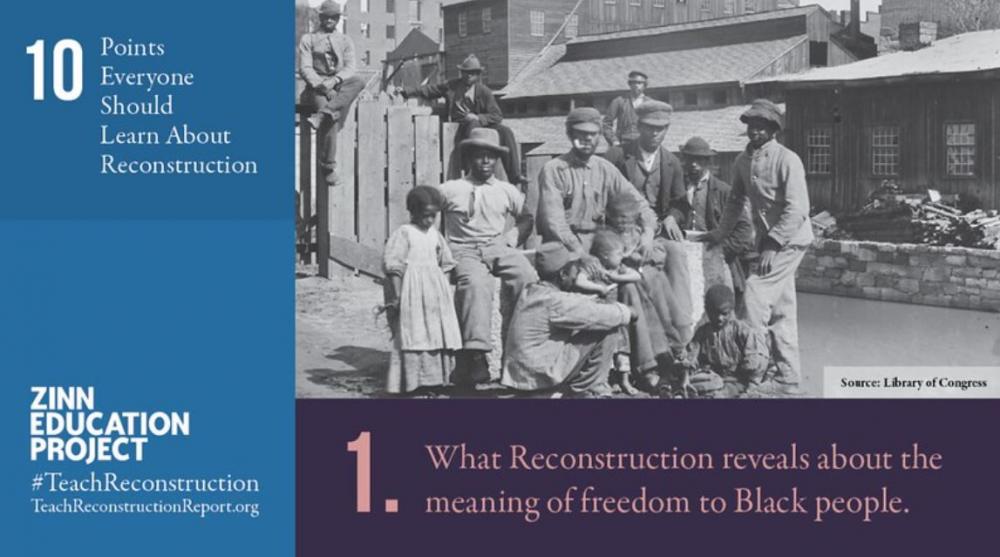 It is our hope that states and districts will adopt these guidelines for their own educational standards, curricula, and professional development. In so doing, they will be better equipped to teach students the true history of Reconstruction, help students understand its significance and make connections to the present day. And they will empower teachers to educate their students and themselves about ongoing Reconstruction scholarship.

Here are a few introductory podcasts on the Reconstruction era.

If you are in D.C., visit the special exhibit on Reconstruction, Make Good the Promises, at the National Museum of African American History and Culture (NMAAHC), through August of 2022.

Open Letter from Scholars on Reconstruction 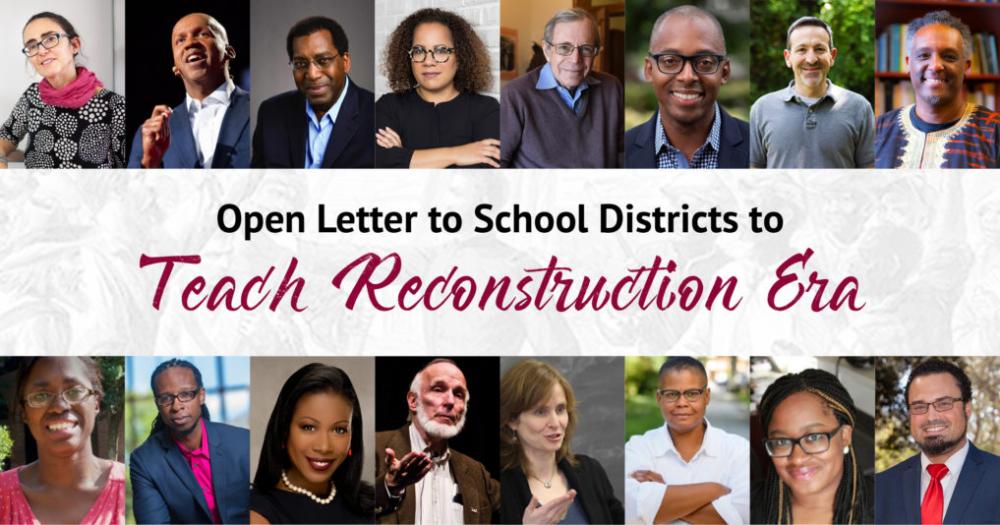 Gregory P. Downs, professor at the University of California at Davis, explains why he signed this letter:

If students don’t understand Reconstruction, they don’t understand U.S. history, politics, or form of government, nor do they understand the history of racism and racial oppression in the country. I signed this open letter because no period in U.S. history is more important for the nation’s story nor more relevant to the students’ experiences today.

The lead researchers and writers for the report are Ana Rosado, Gideon Cohn-Postar, and Mimi Eisen with the Zinn Education Project team, and contributions by Joshua Strayhorn, Kristina Williams, and Reina Henderson. The Teach Reconstruction campaign advisors provided substantive feedback.

The report will be continuously updated. Teachers and other staff at the state, district, or classroom level are invited to complete the short survey below.  Respondents receive a subscription to Rethinking Schools magazine in appreciation for their time.