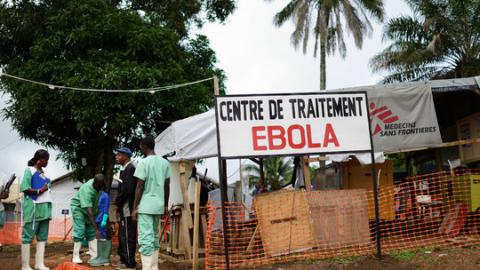 Amid the deadliest Ebola virus outbreak in history, doctors are fighting the disease and also local populations' fear of medical treatment, Photo by Samuel Aranda for The New York Times.

As the Great Ebola Freak Out continues in the United States, inveterate Africa reporter Howard French tweeted something pretty trenchant:

"Generally, on #ebola, we could use less feature writing at this point and much more work on institutions, processes, politics of epidemic."

This is an excellent suggestion!  But as a follow-up, I'd note that there already has been some outstanding journalistic and scholarly work on this very question over the past few months or so.  And a perusal of this literature reveals the following seven observations.

On HBCUs, White House Moves From Disregard to Dismantling

Not so long ago, historically Black colleges and universities were just a thorn in the side of the Obama Administration. We will soon long for those days, because signs of the administrative shift from disregard to attempts at dismantling HBCUs, are growing in frequency and impact seemingly every year.

The White House has not matched resources with rhetoric, and it's getting worse. For every HBCU Student All-Star that is named by the White House Initiative on HBCUs, there are hundreds of students denied the opportunity to matriculate or complete a degree at an HBCU due to a lack of financial aid. For every line of support for HBCUs and their students uttered by Education Secretary Arne Duncan, policy and funding consistently makes him, and those who echo his sentiments, liars.

Prison to Table: The Other Side of the Whole Foods Experience

When I worked at Whole Foods as a cashier, customers told me on a number of occasions that they chose to shop there because they believed working conditions in the store and on the supply chain were excellent. "You must love working here," they would comment. They would smile when I explained what the Whole Trade label meant and ask me for a list of Whole Trade products available in the store. They would ask questions about local products and come into the store specifically to meet the producer during special events.

So when customers found out that prisoners were being paid appallingly low wages for helping to create some of the artisanal foods that line the store's shelves, they were outraged. Why shouldn't they be? Beyond exploiting a vulnerable population of workers housed in the nation's prisons, Whole Foods had essentially defrauded these customers.

The pretty image of Whole Foods' good labor practices has been ripped away, and now customers are getting a glimpse at the ugly reality beneath it.

Over the last few decades, residents of many traditionally liberal states have moved to states that were once more conservative. And this pattern has played an important role in helping the Democratic Party win the last two presidential elections and four of the last six. The growth of the Latino population and the social liberalism of the millennial generation may receive more attention, but the growing diaspora of blue-state America matters as well.

The blue diaspora has helped offset the fact that many of the nation's fastest-growing states are traditionally Republican. You can think of it as a kind of race: Population growth in these Republican states is reducing the share of the Electoral College held by traditionally Democratic states. But Democratic migration has been fast enough, so far, to allow the party to overcome the fact that the Northeast and industrial Midwest contain a smaller portion of the country's population than they once did.

All in the Family

A privately held company founded and owned for decades by the Demoulas family, Market Basket is the sole reason Walmart has been unable to gain a foothold in New England. When CEO Arthur T. Demoulas (known affectionately as ATD or Artie T.) was ousted in June by a board controlled by his rival cousins, it was the long-expected culmination to a feud at the heart of the chain's ownership.

By mid-July, loyal top executives at headquarters and in the warehouse began a company-wide rebellion, which led to their summary termination. They went on to marshal the collective force of twenty-five thousand workers to shut down the entire company - and win.